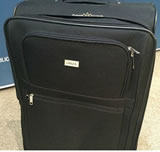 Joining the millions of words already written about this century’s most famous missing person comes news that “the skeletal remains of a toddler closely resembling Madeleine McCann in age and other aspects has been found in an abandoned suitcase” in South Australia.

Florida-based website Crime Magazine runs the story saying police “believe the child was murdered and her body kept in the suitcase for up to eight years before finally being deposited at the side of a highway”.

With the headline “Is Madeleine McCann the Australian Dead Baby Doe Victim?”, Crime Magazine adds that “authorities have not made any connection” yet to the disappearance of Madeleine McCann from a holiday apartment in Praia da Luz, Algarve, in 2007 - but they have issued an appeal asking people to “think back into the past, back to 2007 and the years in between” and try and remember any child that could answer this description whose whereabouts they are no longer sure about.

Australia’s ABC news affirms “there is no-one on the South Australian database who is thought to match the discovery”, and commentaries flooding in as a result of the grisly find are equally adamant that “no Australian child of this age/ sex matches any known disappearance”.

Intriguing too is the fact that years ago, when sightings of Madeleine all over the globe were commonplace, there were two that firmly alluded to “Australian connections”.

The first involved a “Victoria Beckham look-alike” with an Australian accent seen in a Barcelona marina “in an agitated state” 72-hours after Madeleine went missing.

The attractive young woman is understood to have been “waiting to take delivery” of her new daughter.

Despite a widespread appeal for further information, the lead went cold.

An Australian socialite millionairess was also linked to this sighting as her yacht was believed to have been in Barcelona marina at the same time.

That connection too fell almost as soon as it was mooted.

Since then there have also been stories about a British pedophile now serving jail time in UK who had spent “ten years on the run in Australia” after sexually abusing a nine-year-old girl in Sydney.

Seventy-eight-year-old Roderick McDonald - which Sydney’s The Daily Telegraph claimed had been “known as Roderick William Robinson during his time in Australia” - has a connection with Portugal as it was here in 2010 that Interpol finally caught up with him, extraditing him back to Sydney where he served a brief prison sentence before moving to Thailand.

In other words, the “Australian connection” in this eight year mystery is not a new one.

Crime Magazine presents its theory, posted yesterday (Friday), on the basis that Madeleine “is by now presumed to have been slain”. 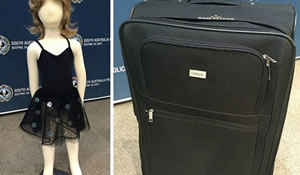 “Like Madeleine McCann”, the website continues, the child whose remains were discovered 130 km east of Adelaide “was fair-haired and about two or three years old when she died”.

Australian police have added that “dead Baby Doe was likely transported from place to place in the suitcase, based on the condition of her body and the date of her clothes”.

For now, it remains to be seen what results from the Australian police appeal.

Quoted on ABC news, the detective in charge of the inquiry, Superintendent Des Bray, said police were not able to say how long the child’s remains had been in the suitcase “but it’s clear to us it’s foul play."

"The girl would be two to four years of age at the time of death and if alive today, and subject to when she died, for example, if she died in 2007, the little girl would be between 10 and 12 years old today," he added.

Be very cautious about identity until DNA tests are done. I am very sceptical
MTB
Refresh comments list