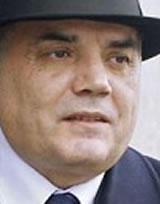 A new ‘mood’ has emerged following the successful appeal by former PJ inspector Gonçalo Amaral against €500,000 libel damages awarded to the parents of missing Madeleine McCann.

For the first time “serious figures” formerly connected to the government and PJ are questioning the political pressures that effectively shut-down the original Portuguese investigation - allowing nothing to move forwards other than the abduction theory.

Without naming names or pointing fingers, it is clear that Amaral’s victorious return from the cold of litigation has paved the way for less-than-habitually-guarded discussion.

While here CMTV screened a four-way interview late on Saturday night which threw up the issue of ‘plausible leads’ nipped in the bud in the early days - as they simply did not fit with the abduction profile - in Edinburgh former ambassador and human rights activist Craig Murray has weighed onto the scene, outlining the sort of pressure that Portugal had to contend with.

“I am going to come straight out with this”, he wrote in a post following news of Amaral’s court victory. “British diplomatic staff were under direct instruction to support the McCanns far beyond the usual and to put pressure on the Portuguese authorities over the case.

“I have direct information that more than one of those diplomatic staff found the McCanns less than convincing and their stories inconsistent. Embassy staff were perturbed to be ordered that British authorities were to be present at every contact between the McCanns and Portuguese police.

“This again is absolutely not the norm. On a daily basis more British citizens have contact with foreign authorities than the total staff of the FCO (Foreign & Commonwealth Office). It would be simply impossible to give that level of support to everybody”.

John Buck, Murray’s direct boss in the FCO when he was head of Cyprus Section, was the British ambassador in Portugal when Madeleine went missing in May, 2007.

“He and his staff were concerned by contradictions in the McCann’s story”, Murray continues. “The Embassy warned, in writing, that being perceived as too close to the McCanns might not prove wise. They demanded the instruction from London be reconfirmed. It was.”

Murray’s post does not dwell on the reasons for this “far beyond usual” support, but he concedes “that it might have put some psychological pressure on the Portuguese investigators and prosecuting officers in their determinations”.

Talking on CMTV in the early hours of Sunday morning, former PJ director Manuel Rodrigues left little doubt that it had.

In a one-hour “special” which went out between 11.30 and 12.40, Rodrigues and former Minister for Internal Administration Rui Pereira both lamented British interference which, Rodrigues concedes, may ensure that “blame” in this apparently unsolvable nine-year-old mystery “dies a spinster”.

Why a faithful reconstruction of the night of Madeleine’s disappearance was never achieved he still does not know, he explained.

Rodrigues referred to the “pure ingenuousness” of Portuguese authorities, allowing forensic tests on evidence recovered to be allowed to take place in a British laboratory so that there was no whiff of uncertainty.

In the first report, 15 alleles* out of 19 that made up Madeleine’s DNA appeared, he said.

Then, in a second report, all the alleles had “disappeared completely”.

Amaral too had his moment to outline some the ‘plausible hypotheses’ that emerged in the early days as his team shifted its focus from the likelihood of an abduction.

A late-night sighting of three figures entering Luz church with a large bag coincided with the existence of a coffin inside the church, he said, into which Madeleine’s body could have been placed.

The coffin - holding the remains of an elderly British resident - was taken the following day for cremation in the Alentejo.

Amaral stressed nonetheless that the book ‘Maddie: The Truth of the Lie’ that the McCanns have sought to ban is not ‘his truth’ - nor indeed factual truth - but the opinion of the PJ in September of 2007 when it became clear their efforts were about to be archived.

Since that time - and even when Scotland Yard became involved in 2011 and vowed to ‘peel back the layers’ of the mystery as if peeling an onion - none of those original lines of investigation have ever been revisited, resulting in the situation in which millions of pounds have been spent getting nowhere, or as Amaral put it: “going down a one-way street”.

That the four-way interview went out at such a late hour suggests CMTV is still being careful about how it presents this case, but Amaral’s ‘victory’ for freedom of expression would appear to have lifted the lid on a Pandora’s Box shut tight from mainstream media for almost nine years.

In UK, the Sun leaked a lurid colour page promising an exposé on “Maddie Cop’s Sick Secret” on Sunday morning.

It turned out to be nothing more than the rehash of an ‘Amaral-bashing’ story by the Express a year before in which British people donating to his legal expenses were tarnished as ‘online trolls’.

But it served to highlight that ‘pressure’ in Britain to stick to the abduction theory and demonise everything else could still be at work.

(* An allele is a variant form of a gene. Some genes have a variety of different forms, which are located at the same position, or genetic locus, on a chromosome. Humans are called diploid organisms because they have two alleles at each genetic locus, with one allele inherited from each parent.)

With kind thanks to The Portugal Resident

Good work, natasha! Now it's time to stop being timid, and to give an airing to my conclusions about the falsification of the creche records. There, I said that without libelling anyone! Do you trust me to go further?

Dewi! Great to hear from you! I have always wanted to give your theory a good airing. We need to do it on the basis of how MANY times you have put it to police to see them ignore it. Add your excellent qualifications as an analyst before retirement and we would have an amazing story... we would just need to step carefully and use our words even more cautiously... but I think it's possible.
Get in touch? very best, natasha
+8 #3 dewi lennard 2016-04-25 12:22
Good work, natasha! Now it's time to stop being timid, and to give an airing to my conclusions about the falsification of the creche records. There, I said that without libelling anyone! Do you trust me to go further?
-4 #2 Rob Taylor 2016-04-25 08:38
What lies behind this is certainly British pressure on the Portuguese authorities. History had shown that nothing resembling an effective investigation would take place if the consequent publicity threatened to affect the tourist trade.

As always before it was intended that the McCanns would finish their holiday and go home quietly. Get over it. This would have been the first warning by the English speaking hotel staff - "if you don't make a noise about your missing child; no-one else here will."

We now know of other previous traumatic incidents witnessed by parents of a sweaty, darkish skinned pervert with 'poor english' looming over little British infant girls in their holiday bedrooms. Reported to the PJ; the parents returning in the UK with no follow up contact. Fair Trials International has several other examples of wildly inept Portuguese investigations or judgments of crimes or injustices against British citizens in Portugal.

What has long needed flushing out into the open is the idiotic negative bias that Portugal -a country that is supposedly in the EU trade block - has towards other EU foreigners and with the British in particular. Driven by the fact of Portugal 'losing' what it had hitherto assumed was its territory, particularly in southern Africa - some 150-200 years ago!

Giving it a bizarre inferiority complex neurotically still held today and maybe for another 200 years - Portugal totally incapable of facing its demons and maturing ...
+12 #1 Charly 2016-04-24 23:41
Such a behaviour is of course the result of "who knows who". And this seems to be an universal problem, not only an English or a Portugese one....
Refresh comments list