The feeling that the inhabitants of Faro have about the splendid scenery of the Ria Formosa is one of great disappointment loss due to the construction, a century ago, of the railway line and the embankment that supports it, which shut off the view over the city's waterfront.

So when any Faro resident goes to Olhão he can still view with a particular fascination the magnificent landscape of the islands, the marshes, the fishing boats, the setting of the sun below the distant horizon - it’s an ever changing scenario that feeds those feelings that touch our Atlantic souls.

The blessing that enhances this essential part of Olhão’s identity has shaped its population as they contemplate the boats and the tides from the dockside, the terraces and the belvederes.

So, it is with indescribable incredulity that I see the latest project from Olhão Council which translates into a desire to completely ruin the view from the city’s riverfront by extending the marina used for pleasure boats.

This marina, which already is a shameless size that covers half of ​​Olhão’s waterfront, is to continue its expansion from the current site to block off the view from the fish market with a second phase due to expand into the area near the pier where the island ferries dock.

This is the will of the mayor, to shut out the timeless backdrop of views over the Ria Formosa.

It's not so surprising if you look at the history of this city. About 25 years ago in a television interview, the maestro Almeida Vitorino stated that Olhão had been considered possibly the most beautiful city in the world, but on his last visit he was shocked to see that terrible changes had occurred. The conductor noticed the deep mischaracterization of many houses with 'bathroom tile' exterior finishings, aluminum frames glittering in the windows and doors, and uncared for buildings everywhere.

Olhão invariably appears (or appeared) in reference books and international compilations on vernacular architecture alongside the most important places in the world with its carved lime recesses and mysterious medinas, it was the charming muse of João Lúcio and Artur Pastor among many others, this masterpiece of form, light and colour, has, over the years, deplorably been stripped of its character,  bastardized and mutilated, without mercy, under the baton of successive Council presidents who have demonstrated ignorance, insensitivity and an enormous lack of good sense.

Also, the strong population has not known, when facing the totalitarian dictates of fashion, how to defend their culture and their ancient values.

And so we come to this ridiculous and shameful situation in which, at this point, the people who are standing up for the integrity of Olhão, its architecture and its culture, are almost exclusively the foreign community that has settled there in recent years.

Let us list some of the official contributions to the disfigurement of Olhão:

• The ruination of the Avenida da República, once a charming and romantic thoroughfare, but now with numerous beautiful houses and palaces demolished;

• The state of disrepair and decrepitude of many houses and old factories which are lining up to be demolished, as has already happened to many of them, which, for their architectural importance, would in any other civilized country be exquisitely renovated;

• The calamitous state where the historic districts have been left without character and where the only intervention that has taken place was the introduction of pedestrian finishings and contemporary fittings at odds with the whole area, with the exception of half a dozen houses renovated by foreigners who have returned to the era of whitewashed walls and wooden windows and doors;

• Permission to build additional floors on front line houses so the view from many terraces further back in the city has been blocked;

• Permission for the construction of the Real Marina Hotel and the adjacent apartments to the west, with a volume and an architectural style that is incompatible with the unique urban fabric of Olhão.

Finally, and sadly, we have to add one more barbarity in this pitiable litany of incompetence, ignorance and lack of love for patrimony: the extension of the recreational marina - a boa constrictor that will slowly suffocate the stunning views over the Ria Formosa.

By kind permission of the Barlavento newspaper where 'As vistas de Olhão' was first published. 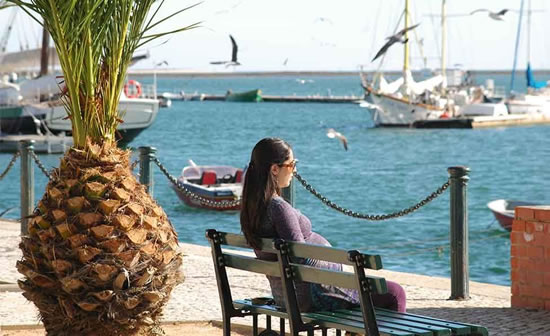