Olhão’s increasingly active citizens again were out in force on Tuesday evening to attend a public meeting arranged by the council with a chance to quiz the Lisbon-based architects from Baixa Atelier on the new plans to modernise the city's Historic Zone.

Mayor António Pina welcomed an audience of around 150 people, a mixture of Portuguese and foreigners with nationals in the vast majority, and explained that the public consultation period for the plans under discussion would end later this week on the 28th of November and the council then would decide what to do next in the light of the many comments received to date.

Pedro Ravara from Baixa Atelier went through the detailed plans and clearly was well aware of the furore surrounding the proposed 22 metre tower, as he did not mention it until 40 minutes into his presentation, and then as briefly as possible. The intention that the tower also was to be used a a water deposit and tourist office did little to quell the indignation that this structure was to be imposed on the an area where tourists could look down on neighbouring private roof terraces.

The main points of controversy to date have been the proposed 22-metre viewing tower, the planned removal of much of Olhão’s famous patterned calçada pavement and the building of an unnecessary Cultural Centre in a square at the south-westernmost edge of the old city.

At the end of presentations from various of the Lisbon architects, the crowd was in the mood as question time began.

Horta Correia, the noted Professor of 'History of Art and Architecture' at the University of Algarve and vehement critic of the plans as they stand, reiterated parts of his speech of the week before when addressing a 200 person meeting of concerned citizens.

The Professor politely thanked the architects for their presentations and had not moved his stance that the new plan, which he has called “an aberration”, is that it is not a preservation plan at all, it is a modernisation plan and that the biggest cultural thing the council could do is to retain the city centre, not modernise it.

Prof. Horta Correia said the building due to be demolsihed points towards the the old Church, the first solid building in Olhão and he suggested to the young architetcs that they each read a copy of 'Olhão Fez-se a si próprio' by the History Professor António Rosa Mendes,

Setting a high-handed tone that continued, architect Pedro Ravara accused the good Professor of having a ‘political agenda’ which drew gasps from the audience as Correia is a noted academic and was there to express his professional, not political, opinion.

Questions from the audience included those concerning the choice of rectangular machine-cut blocs for the repaving of much of the defined historic areas, their cost compared to traditional calçada and the possibility of reusing the current calçada when new draining systems need to be laid.

The answer that the new machine-cut stone 'comes from Portugal' and that 'it is used in the modernisation of many historic centres' failed to convince.

A question about the viewing tower that requires the demolition of a rather beautiful 18th century building was not answer with any degree of confidence.

Fernando Silva Grade, author of “O Algarve tal como o Destruímos” said that Olhão is a unique and extraordinary city on a worldwide level and was horrified at the inclusion in the plan for the raising of certain building heights along the iconic river frontage which would block the traditional views from the viewing towers, or ‘mirantes’ in the two historic housing areas of Barreta and Levante.

Fernando Silva Grade drew a comparison with Fuseta where apartment buildings have been allowed to crowd out front line of the town, leaving none of the traditional sight lines from the original town centre buildings.

Olhã council architect Ditza Reis was chairing the questions and answers session and tried to end Sr Grade’s observations and questions on three occasions, without success as he had encouragement from the audience, as befits a man of his expertise and eloquence.

One of the Lisbon architects struggled to answer a question over the exact status of the plan and how it fitted, or didn’t fit, with Olhão’s existing overall planning framework.

“This plan did not cost Olhão council anything” was hardly an encouraging answer, in fact it was not an answer at all, one of many that the Lisbon team struggled with.

Local architect Filipe Monteiro informed the panel that a Belgian architect who has a property in Olhão had organised an online petition to 'safeguard the city centre' which already has 1,750 signatories, 90% of them from outside Portugal, including those of 150 architects.

Monteiro spoke on behalf of the foreign residents who may not be fluent in Portuguese and conveyed their opinion that the modernisation plans represent the removal of the aesthetic appeal of the city to which many property buyers have been drawn.

Mayor Pina, inevitably aware of the swathes of negative publicity that now surrounds the modernisation plans that seem to have his name indelibly printed on every page, summarised the energetic public consultation, insisted that these plans are not immutable and said the council now will decide what goes and what stays before the plans go to a council meeting for approval or rejection.

Later Pina confirming that the 22 metre viewing tower would not be in the final version of the plan and that the patterned calçada was staying put, or being relaid if it needs to be disturbed to install underground services.

Whatever outcome for the city, 2017 is a re-election year for the mayor and Pina's keen eye for the vagaries of public opinion should see him through, unless he pushes through with plans that few of the electorate agree with.

The council architect Ditza Reis, seemed defensive and rather keen to push ahead with plans that have yet to be voted on and adopted. At a delicate time like this, where politics meets architecture, is is not wose for the mayor to have a team that seems anything other than even-handed.

There is a good spirit of cooperation between the mayor and the community, many aware of the recent work he did to help ensure victory for the Ria Formosa islanders.

The foreign community of property owners have a large stake in Olhão's road to prosperity, something the mayor is well aware of.

The signs have never looked more positive that Olhão can be cared for, not turned into someone's confused idea of a tourist offering but politics is a strange beast and the jury is out as to how Olhão's centre will end up: a charming, authentic and engaging place that attracts tourists time and time again, or a sterile theme park for one off trips. 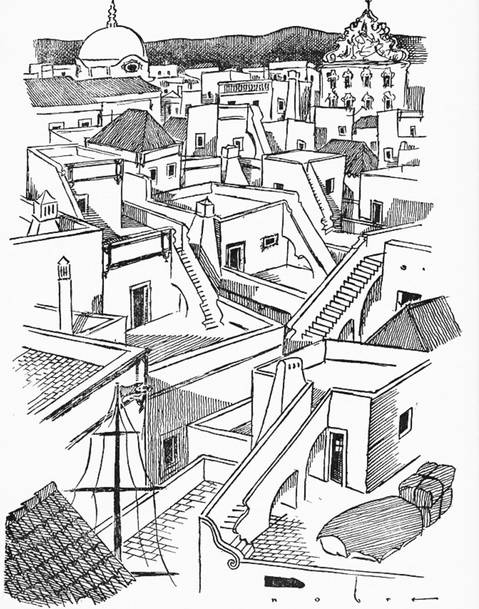 I believe the artist is Pascal, the brilliant organiser of the online petition