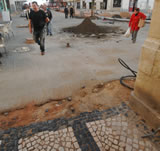 Satuday evening saw up to 100 foreigners and local Portuguese meeting at the historic Sociedade Recreativa social club building for the launch of a helpful document that the council is advised to consider when planning any changes to Olhão's historic centre.

All agreed that the work so far in Olhão has been out of keeping with the historic nature of the city with modern paving and lighting in a city that was vibrant and progressive even in Napoleonic times.

Those assembled were encouraged later to read this document written by a local architect in English and Portuguese (see below) and e-mail the mayor to suggest he and his colleagues should rethink the plans submitted from a Lisbon-based architect Baixa Atelier that the council currently is consulting, that the council now should consult local stakeholders and study the relavant existing protocols for historic city centres before making further expensive mistakes.

Copies of the Lisbon architect's plans have been posted in the Sociedade Recreativa building, many popele at the Saturday meeting were seeing these for the first time and could spot where the council proposes to make changes that will affect many and mainly benefit the contractors.

The problem areas highlighted at the meeting were

It was made clear by the speaker that Olhão's council executive does appreciat the views of the public whether from Olhão, Portugal or abroad,

Below is a suggested form of words for anoyne to cut and paste into an email, add their own comments, and which can be sebt to:

I have read the consultation document titled ‘Revision of the Municipal Plan of Olhão' which contains advice and expert comments on the sensitive development of the city centre of Olhão.

There is no need at all to remove the charming old calçada areas and streets, the calçada being one of the main reasons people visit your delightful city, nor is there any need to repeat the design mistakes seen in the Praça and the other squares along the Caminho das Lendas which now have modern shopping centre lighting, inappropriate paving slabs and blocs of granite for seating, which few people use.

I urge you to rethink more expensive, modern designs from the Lisbon architect which include demolishing buildings for no good reason, altering the skyline along the Avenida 5 Outubro, removing historic calçada areas and replacing with modern materials and inappropriate lighting.

The inward investment in Olhão has been from foreigners with money to spend on renovating old buildings. In this way the city is being regenerated. There will be no attraction to this town if it loses the character which draws people to come to Olhão to visit or invest and improve property here.

Millions can be better spent just maintaining and renovating Olhão as it is instead of making fatal and lasting mistakes at great expense.

I understand that this view is almost entirely universal.

Please end by adding as much of the following information as you are happy with:

Appendix B - Revision of the Municipal Plan of Olhão  - English

+1 #1 Fedupwithallthecrap 2014-11-16 08:56
Why wasn't a local architect employed? Ah...the likes of Atelier Bernardes (probably the most local with all the necessary support staff to take on a change to the Town Plan / 'PDM'), would have advised against it? So I wonder who may be getting kickbacks. Current mayor is probably from the same stock as the last, who if I recall correctly would refuse to comply with court orders regarding inspecting paperwork.
Refresh comments list