Villagers on the Ria Formosa island of Culatra say they will stand between the machines and 50 properties due for demolition when contractors arrive to flatten them.

Polis Litoral Ria Formosa, the company intent on seeing properties remoevd from the isalnds, despite the Minister of the Environment saying to parliament that demolition cases will be discussed on a ‘one by one’ basis, already have taken administrative possession under the protection of 40 Maritime Policemen, leaving the islanders little hope of consultation and engagement to resolve this long-running issue.

The SOS Ria Formosa - Je Suis Ilhéu movement said today that standing in front of the machines will be their last ditch attempt to halt the demolition process and will be fully aware that physical intervention, arrests and charges could follow any actions that impede the demolition crews mandated by the State to destroy island properties.

The villagers all along have resisted the forces of the State by all legal means at their disposal, but their non-violent protests, albeit very noisy, have remained within the law and have been appreciated by the police charged with ensuring nothing gets out of hand.

But their non-violent struggle “seems not to have led us where we would like to be,” and the protestors have nothing left to lose but their homes in many cases.

Island activist, Vanessa Morgado, announced today that the island movement will not take any responsibility for what might happen if the Polis Litoral Ria Formosa Society "decides to bring in the heavy machinery for the destruction of dwellings in the villages of Farol and Hangares on the island of Culatra," which as things stand, is exactly what will happen.

Saying that things could get ugly, Morgado added that the suffering involved means everyone will be there at the last stand.

“Are there going to be consequences? Probably, but it was not us who chose this path,” added the Facebook posting which states that “the islanders have been condemned to extinction.”

The exact date of the demolitions is not yet known and the islanders rightly anticipate that nothing good will come out of a process which they say, "will be bad for the State, for the contractors, and bad for those in the Maritime Police who know us and know that we have lived on the islands for many decades but still have to do their service."

"We wanted to be thinking calmly about the future of the islands, what we can improve here and there, thinking of taking care of our homes and making the investments necessary for their conservation without the constant threat of demolitions. Unfortunately, we cannot do this as they do not want to give us any peace," the posting adds.

An open letter to the President of the Republic, Marcelo Rebelo da Sousa, was sent last Saturday asking for his intervention or at least a message of support but no response has been received. (Click HERE) 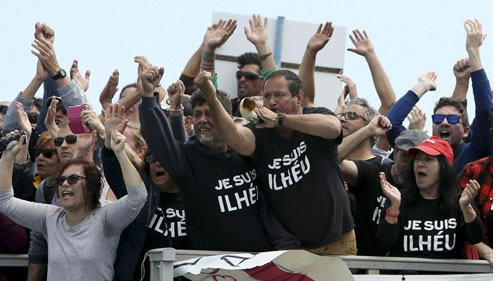 If they need the sand, why not take it from Manta Rota, which has acres of beach? And as you say, Ed, as soon as you take some of the sand, the sea has a way of redressing its balance. When they opened the bar through Tavira Island in the 1920s, the nearby longstanding arraial was completely destroyed within ten years.

I believe that the Portuguese authorities still do not understand the consequences of their actions when they mess about with their own coastline.
+1 #3 Margaridaana 2017-03-09 16:41
I really feel for these people. The islands are a haven of tranquility, but for how long? Once these properties are demolished, the developers will move in to build even more monstrosities to blight the Algarve.
Wish I could turn the clock back 30 years.
+4 #2 Ed 2017-03-09 12:40
The 'being too close to the beach' law that seems to be applied rigourously to the islanders but not to properties on the mainland within the same Ria Formosa natural park area.

The islanders point out that the State has sanctioned the removal of huge amounts of sand (to be used for construction) from the island shores which brought the sea closer at high tide. Also, when (selected) front line properties are removed with the aid of men on bulldozers, the sea will further encroach, so soon enough the former second line properties also will be pulled down as they are 'too close to the sea' - and so it goes on...
+1 #1 Peter Booker 2017-03-09 12:03
So who is the bad guy? Clearly not Sebastião Teixeira. It must be the PM and his cabinet.

So what law is the state enforcing? Why is the legal issue still hidden?
Refresh comments list