The unveiling of a monument marking 100 years since WWI and the role played by those in the now sleepy settlement of Hangares on the Ria Formosa island of Culatra, went ahead on August 30th but with an unexpected and not universally welcomed announcement which has been slammed by the environmental organisation, Almargem.

The event aimed to 'value the collective memory and celebrate the achievement of peace and democracy,' but ended up being used by the Navy to announce the conversion of the derelict military area into a fully equipped training base for Portugal's Marines, right in the middle of the Ria Formosa Natural Park which is a Natura 2000 area.

Hangares residents knew in advance that they at last would be allowed to use the jetty, long denied them as it long had been reserved for military use, but had no idea that Admiral Silva Ribeiro was to announce the Hangares disued military area was to be recommissioned and used as a bomb disposal site, a training area for the Special Action Detachment of the Marines and as a base from which to practice and launch military operations, "as and when necessary."

The reactivation of the area by the Portuguese Navy, a site that suddenly has the ‘natural conditions’ for such activity despite its proximity to the quiet settlement of Hangares, could best be described as a shock for those whose lives in this registered natural park only recently have been relieved of the threat of wide-scale demolition of properties under the ‘island clearances’ programme.

"This space had already been used for the training of our divers, in the inactivation of explosives, and for the training of Marines. These actions will continue and will be strengthened. But we also have the opportunity to transform this space into a training area for the Marines using the high-speed boats of the Special Action Detachment. These are operations of great complexity, sophistication and discretion," according to the military.

The Secretary of State for National Defence, Marcos Perestrello, wittered on about the work that the residents' association has done to improve Hangares, the conditions for those who live there and “respect for the environment."

On the plus side, use of the jetty by residents and visitors will be “a significant improvement in accessibility to the settlement," according to residents’ association chief, José Lezinho who put on a brave face in the face of full-on military activity on the idyllic island, stating “This is a historic day. We have struggled for years to improve accessibility for the settlement,” adding that there may be some civilian jobs involved.

The military normally will out-trump ministries such as that for the Environment which has kept its head below the parapit. Another plus point is the dilution of the fear that Culatra is destined to be auctioned off to tourism businesses keen to exploit its Caribbean feel and long sandy beaches. A hotel near a 24/7 military base not only is a security risk, it may well be a financial risk not worth taking.

Local blog, Olhão Livre, commented that all may not be so above board: “Meanwhile, the National Maritime Authority has illegally placed video surveillance cameras in the Farol tower, facing the urban part of the island, when it should be facing the sea to protect those on the fishing grounds. These were installed without the opinion of the Commission of Protection of Personal Data and without any public consultation with the residents of Farol, turning that area into an authentic big brother.

“The proximity of the houses to the military perimeter, if the situation is maintained, may be incompatible with the type of training proposed. This is an argument that can be used in the short-term to justify the demolition of the remaining buildings. It is obvious that the authorities will not say anything. On the contrary, they will continue their charm offensive to calm the residents. An example of this is the transfer for mixed use, civil and military, of the jetty where until very recently civilian boats were not allowed, with the exception of the hotel boat from Olhão.”

The Almargem Association is not too impressed either:

"...in the early summer of 1995, the Portuguese Navy was prevented from carrying out another bomb disposal action at the so-called ‘shooting range’ of Culatra Island, it was apparently assured that this area would never again be used for this purpose.

"After 22 years, the bombs and military exercises will be back, according to recent statements by the naval chief of staff present at Hangares for a ceremony to commemorate the centennial of naval aviation, organized by local residents.

"Almargem understands that the rehabilitation of the military wharf and its partial use by civilian vessels has been popular with the population of Hangares, bearing in mind that for many decades, and precisely because of the Navy's imposition, people had to walk from Farol or Culatra. It is also understood that the permanent presence of the military in this area can have a positive influence on the control of drug trafficking and other illegal activities. It remains to be seen what influence this new situation will have on the demolition policy currently in force by the Government.

"But what is no longer admissible is that the island of Culatra, in the heart of the Ria Formosa Natural Park and Sítio Rede Natura 2000, is again subject to military exercises with the landing of Marines using high speed craft, operations with live ammunition, and for the blowing up of explosives. The quality of life of the citizens and the vocation of Culatra Island for fishing activities and sustainable ecotourism are absolutely incompatible with these actions.

"The Almargem Association will be waiting for a clearer position from the Government, in particular the Ministry of the Environment and the ICNF, about this situation. If nothing is done to further prevent this potential attack on national and European protected areas, Almargem will file a formal complaint with the European Commission.

For parts of the ceremony, see this YouTube video: 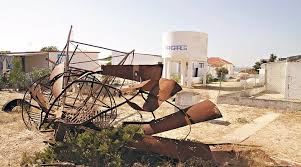 The Portuguese army won't be able to participate, someone stole their guns !!!