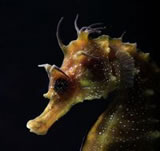 Opposition MPs Teresa Caeiro, Patrícia Fonseca, Álvaro Castello-Branco and João Rebelo have questioned the Government on news reports of the danger of the Ria Formosa seahorse population dying out, considered until recently the largest population of seahorses in the world .

Secondly, the MPs ask what environmental control and management plan is in operation specifically to help the seahorse population, including measures for the conservation and restoration of their habitat in the Ria Formosa to ensure the sustainability of the species.

Under the heading "The seahorse at risk of disappearing," Correio da Manhã published a news item that stated that "what has become the largest population of seahorses of the World is almost completely decimated. By mid-2000, it was estimated that there were around two million in the Ria Formosa estuary and now, according to the latest studies, 94% of long-nosed seahorses and 73% of short-nosed seahorses have disappeared."

The figures have been corroborated by researchers from the Centre for Marine Sciences at the University of Algarve.

The news report added that the Faro and Olhão Maritime Police are fighting the illegal capture of seahorses with regular patrols and have made several arrests with fines that in theory, could reach €40,000.

The seahorse is captured, dried and sold to intermediaries supplying the Asian market.*

The MPs added that the seahorse acts as an environmental indicator and that its depopulation has an impact can have catastrophic consequences throughout the marine ecosystem.

Project Seahorse, ‘a marine conservation group dedicated to securing a world where marine ecosystems are healthy and well-managed,’ has been researching the population of seahorses for over 12 years via a number of PhD projects and acts as the IUCN Species Survival Commission Specialist Group for Seahorses and other species.

The Project Seahorse managers “are both aware and concerned about the dramatic decrease in seahorse populations over the last decade which has been attributed to habitat loss and human related activities within the Ria Formosa,” e.g. the illegal capture of seahorses.

MPs, environmentalists and the general public would like to hear what the government is doing in the light of this dramatic decline in seahorse population levels in the Ria Formosa.

* Seahorses that feature in traditional medicine, aquarium display, and curiosities are internationally traded; the number of Hippocampus species that are traded in the global market annually has been estimated to be about 20 million.

Most of them are sold as dried traditional Chinese medicine (TCM) materials rather than live as aquarium pets.

A clear picture has emerged about the curative activities of seahorses because researchers have found out that, in addition to their traditional use in treating erectile dysfunction, seahorses also exhibit antitumor, antiaging, and antifatigue properties and are able to suppress neuroinflammatory responses and collagen release.

The two-millennium history of TCM guarantees a great demand for seahorses among Chinese people, and dried seahorses are mainly consumed in China, Hong Kong, and Taiwan.

The economic development of China, which has increased the demands for TCM, has been catastrophic for wild animals.
It is thus predicted that seahorses will face increasingly deleterious conditions in the future.

-1 #5 Denby 2018-01-14 13:43
Elspeth,
You have never said anything positive about Portugal, never... why do you continue to reside here.
In fact all of your comments appear to be prejudiced against Portugal and the citizens of Portugal.
Sick of your continual negativity.
+1 #4 elspeth macmillan 2018-01-09 11:37
This is an extremely serious situation and must be addressed with the utmost force. 94% is a horrifyingly high figure, which suggests the poaching has taken place over a long period.How and what checks were carried out previously? Is the species now sustainable?
+2 #3 Jack Reacher 2018-01-09 10:24
Quoting Ed:

The main Project Seahorse chap at the Uni tells me it is overwhelmingly the illegal capture for sale of these creatures that has resulted in their decline - now nearing the point of extinction.

I might add 'locally' extinct. The combination of illegal harvesting and poor water quality are both impacts that can be easily stopped. Problem is as always is the complete lack of action from both local and national government departments.
+1 #2 Ed 2018-01-09 08:35
Quoting Peter Booker:

The main Project Seahorse chap at the Uni tells me it is overwhelmingly the illegal capture for sale of these creatures that has resulted in their decline - now nearing the point of extinction.
+1 #1 Peter Booker 2018-01-09 08:23
Could the loss in seahorses have something to do with the increased level of untreated sewage in the lagoons? An unsought outcome from the increased number of tourists, in more ways than one.
Refresh comments list