Petition to rid the Ria Formosa of deliberate pollution

A 'Save the Ria Formosa' petition has been launched for those who think the deliberate dumping of raw and semi-treated pollution into this Algarve lagoon is a bad thing.

The pollution from toxic sewage flowing into the Ria Formosa has been ignored for years by successive Olhão and Faro councils whose members have been fully aware that the waste water treatment plant that serves their citizens fails to cope with the throughput.

Plant and animal life have long been affected and, despite social and news media outlining this saddening situation in one of the Algarve’s most beautiful tourist areas, illegal practices will continue at least until sometime in 2017 when a new treatment plant is promised.

One of the casualties of this toxic pollution are the birds that die on the wastewater treatment plan’s toxic lake run by Águas do Algarve.

Hundreds of birds are killed each year, many of them protected species, and those responsible have been allowed to continue their illegal activities for years.

A report on RTP1 in 2008 highlighted the fact that official bodies are able to break the law each day, laws that citizens are compelled to adhere to. (See picture below)

With today’s buzzwords of ‘off season tourism,’ which included birdwatching, the Ria Formosa area has long been a destination for hundreds of species and thousands of tourists yet nothing is being done to protect the area from an obvious danger to birds, shellfish and unwary tourists.

The petition organisers make the valid point that if a fraction of the money being spent on ruining Ria Formosa islanders’ lives, by knocking down their houses on the spurious grounds that people are polluting the area, was spent on cleaning up the 31 known sewage outlets that run straight into the lagoon's waters, there might be some cooperation and respect shown towards official bodies.

Unless the authorities take this seriously, the launch of ‘nature week’ this week in Faro’s Riverside Park will remain one of the region’s deepest ironies. 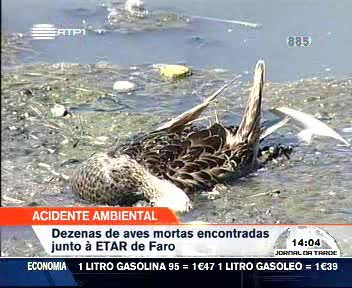