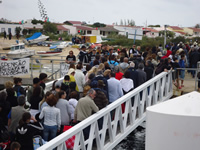 A crowd of 200 Ria Formosa islanders blocked a delegation from Polis and its Maritime Police escort from gaining access to the islands of Farol.

The Polis Litoral company, intent on continuing its work in demolishing 800 island homes on fallacious environmental grounds, again displayed its trademark arrogance by deciding to ignore last week’s Loulé court order that the demolition of 137 houses was suspended.

Not content with the Loulé ruling, Polis today rose above the law and tried illegally to gain access to the islands to mark those houses that it later is convinced it has the right to flatten.

On Sunday 26th April, the Polis Litoral Ria Formosa Company announced that it "has decided to bring before the same court two resolutions based on the action filed by the city of Olhão, and the action filed by individuals who claim that the buildings are not in the Public Maritime Domain, in order to continue our ongoing activities."

Having lodged its legal challenge, Polis said it would be on the island on Monday to start daubing houses with blue numbers to help the demolition teams, hence ignoring the earlier court order that had suspended all work.

The Polis excuse for ignoring the suspension of work was that there were some irregularities in the petition to halt the demolition process, so it would carry on anyway.

On arriving at the island's jetty this afternoon at 2.00pm, the delegation from Polis supported by the Maritime Police came across more than 200 'Je suis Ilhéu' protesters who blocked the gangway to the island, shouting slogans and waving banners.

The Maritime Police and the Polis delegation then were presented with a communication from Loulé court which made it clearer than crystal that no further work relating to demolitions was to go ahead as this would be in breach of the court ruling made last Friday 24th April.

The court letter was ‘to notify the Maritime Police and the Maritime Authority to prevent the Requested Authority (Polis) from starting or continuing the implementation of acts of administration and demolition of existing buildings on the Island of Farol.’

António Cabrita, the lawyer representing Olhão council in its case against Polis, met the Polis delegation and the police on the gangway and later said he was pleased that Polis had heeded the court’s instruction that they were not to interfere with the islanders’ homes until the court process has run its course.

Polis has a further ten days to submit its counter argument to Loulé court and explain to the judges how the demolition of people’s homes is ‘in the public interest.’

Cabrita marvelled at a situation where "a further instruction was necessary" to explain to Polis the correct procedure to follow and said the country sure was in a mess “when a public body needs an explanation on how to comply with the law.”

"Polis yielded when faced with the evidence as any official body must meet the provisions of the court," said Cabrita, adding that the owners now have some time and that the final prize will be the legalisation of their houses.

The Maritime Police faced an interesting situation which was embraced with laudable competence.

Having turned up to shelter Polis from the wrath of the islanders and to enable Polis staff to do their pre-demolition daubing, the task was reversed as the Maritime Police then followed the instruction from Loulé court to make sure that the Polis delegation was not allowed onto the island.

The protesters were noisy and successful as the Polis delegation left the jetty having not been able to set foot on the sand.

How Polis imagines it can flout the law in this manner remains to be explained but it is building up zero credibility with Loulé court's judges who will decide in a week or so whether the islanders can keep their community, or whether the Ministry of the Environment will succeed in eradicating these island communities for no sensible reason.