In a cynical and abusive betrayal, Ria Formosa islanders on Farol have been issued with eviction notices as their representatives prepare for tomorrow’s meeting in Lisbon where they are to present their case to a cross-party parliamentary commission.

This meeting follows a petition submitted to parliament on January 20th aimed at the "preservation of the Ria Formosa and immediate suspension of demolitions." So far 374 buildings have been demolished with plans to remove a further 500.

As late as Tuesday 27th September, the islanders were assured by the prime minister’s assistant that the long-running conflict would be resolved, with the implication that the resolution would be in the islanders’ favour.

A 200-strong group of ‘Je Suis Ilhéu’ protestors gathered on Tuesday (27th September) on a roundabout near the new Pestana Hotel at the International Autodrome to protest at their poor treatment. They received a welcome message of assurance from Antonio Costa's assistant that all would be resolved and their case would get proper treatment.

Little did the islanders know that they very next morning, today, registered eviction notices were to be delivered from Polis Ria Formosa whose chief, the reviled ‘demolition man’ Sebastião Teixeira, either is following orders from the environment ministry, or is acting in defiance of the government’s instruction that ‘nothing will happen this summer’ to inflame the delicate 'Islanders vs the State' conflict.

Either way, the arrival of eviction notices the day before the committee of enquiry meets to listen to the islanders’ views can be categorised as a low trick, but one which Teixeira will shrug off as ‘just doing my job.’

If the eviction notices are signed for by property owners, the letters instruct them that they must be out of their properties by October 27th.

The treatment of this group of Portuguese citizens has been scandalous, the latest example being these demolition notices timed to arrive a day before the islanders’ delegation sets off to Lisbon for the presentation of their lives. 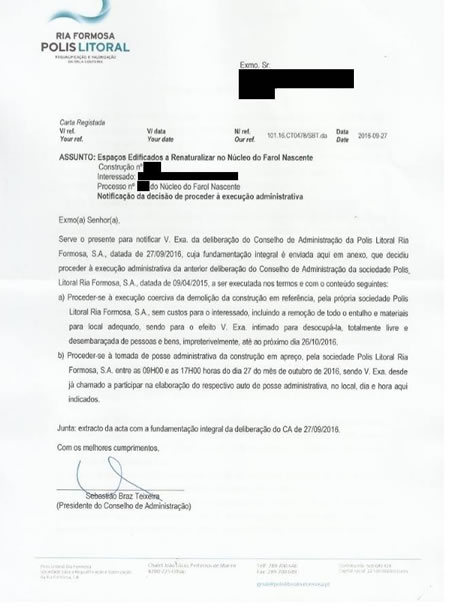 Sebastião Teixeira's signature is at the bottom of the notices, and serious questions must be asked about his behaviour and fitness for office of both Polis Ria Formosa and the Algarve region’s Environment Agency whose additional destructive 'remodelling' of the region’s beaches and duplicity toward the Algarve’s mayors has caused tension, conflict, anger, desperate upset and deliberate confusion.

Teixeira's determination that nothing will stop him from demolishing the list of 800 properties on the Ria Formosa islands, in defiance of the prime minister's instruction to halt all activity until the matter is resolved by Lisbon, is the final straw.

The properties are scheduled to be removed allegedly to make way for 'luxury tourist developments' scheduled for the islands.

Teixeira's zeal therefore is suspicious as money comes into the equation if concession licenses later are to be issued to well-funded tourism companies who may be offering comfy directorships to those who have been helpful in the past...

Teixeira is a public servant yet has failed innumerable times to behave like one and should resign or be sacked.

Pedro Ramos from the Communist Party emailed the Ria Formosa islanders this evening, 28th September, expressing "the party’s outrage, pointing out that at the same time as the minister of the environment stated in parliament that nothing was decided about the island demolitions, Polis decided to press ahead with them claiming they had not been told to hold off."

"In view of the gravity of the situation, the parliamentary group of the Communist Party has requested, with utmost urgency, a hearing with the minister for the environment at the Committee of Inquiry (tomorrow, September 29th)" 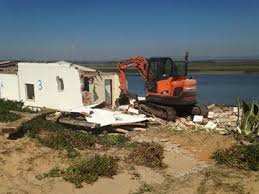 The island of Armona, situated within the municipal area of Olhão council, has around 800 properties but has a different legal status to Culatra and Faro islands as the properties already have been legitimised, but under an agreement that lasts only to 2022.

Armona also will be under the scrutiny of property developers and designs already exist for tourism-based projects which inevitably will get the approval of mayor António Pina whose view is that there is only one viable industry for his municipality - tourism.

Olhão council was able to pass on the right to private use of the public maritime domain land of the west part of Armona.

This was granted to the municipality in 1983 with a term of 30 years, automatically renewable for 10 years unless two years notice is given.

The State did not pull the concession in 2011 so the period of worry-free occupation was automatically extended until 2023.

Despite this legal issue, the ministry of the environment points out that many of the 800 buildings on Armona were built outside the concession area, although 150 had building licenses.

So where is the mayor of Faro? And the mayor of Olhão? Each of them is a part owner of Polis and each has a duty to stand up for his constituents.

Both bought off with baubles, one bridge and one dockside development - how immoral and cheap the suits really are.
+1 #4 Maximillian 2016-09-29 11:35
Quoting Peter Booker:

So where is the mayor of Faro? And the mayor of Olhão? Each of them is a part owner of Polis and each has a duty to stand up for his constituents.

They went fishing with Teixeira