Bill Oddie, internationally respected ornithologist known to millions of British TV viewers as the presenter of BBC's Autumnwatch and Springwatch, made a private visit to Lagoa dos Salgdos recently, currently the focal point of an environmental battle.

Joined by chief 'estrangeiro' campaigner Frank McClintock, Oddie was brought up to date on the struggle to save the whole lagoon area as a haven for birdlife with its own kind of tourism potential, instead of leaving it to be developed into another 'same as' tourist resort. 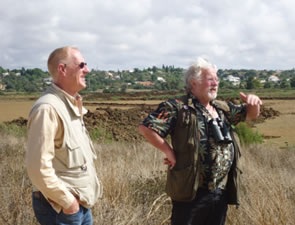 Visible from the Dunas Café meeting place in the centre of the Salgados area were the earthworks created by Águas do Algarve as a trench is dug to lay a new pipeline connecting the upgraded Alcantarilha pumping station  with the lagoon.

McClintock’s explanation that this work is ‘a good thing’ to improve the habitat for birds was tempered by the concern that the water company is supportive of the plan of developers Finalgarve which aims to turn much of the Salgados countryside into a tourist complex with 3 hotels, 2 golf courses, holiday accommodation and all the other necessary development infrastructure covering 359 hectares.

The stance taken by Finalgarve, the Portuguese developer, has not been one of cooperation with the public, despite claims to the contrary, perhaps best illustrated by a statement from Finalgarve’s chairman -

"It is important to us to explain everything to people. Opposition does not help us, of course it doesn’t. But if after explaining everything, people are still against this development, well then, it is their problem.”

On the plus side, the work by Águas do Algarve is well under way and should provide enhanced nesting and feeding areas for birds, enable the water levels to be controlled and generally increase the lagoon's appeal to migrating birds to stop over, rest and feed.

According to Águas do Algarve, the pipeline project, when finished, aims to counteract the disturbance that results from human presence around the lagoon area. This is the worrying bit - as the head of Águas do Algarve is of course Isabel Soares who previously was mayor of Silves council and was instrumental in granting permission to Finalgarve for the development to go ahead. By having a much improved lagoon area on its doorstep the developer can use this 'eco' card in its marketing material to make its offering look friendly to the environment that it may have just built across.

Bill Oddie has been following the Save Salgados campaign from its early days and was impressed by the successful 22,000 signature petition, started by McClintock, to save the area from development.

Oddie questioned the need for yet another large tourism project in the Algarve when, clearly visible from the lagoon-side, sits the 2,600 bed leisure complex of 'Herdade dos Salgados' built by CS Group and recently bought from its creditors by a venture capital group due to the builder's insolvency.

The towers of Armação de Pêra to the west form the other border of the Salgados area which, Oddie said, could easily become a fantastic natural wildlife destination, an area of green between these two built environments. An upgraded wildlife are would also attract walkers and bicyclists and this would be easy to achieve with appropriate multi-lingual signage, a visitors' centre, walkways and hides so that birdwatchers from around the world could visit this wonderful bird-rich area of Portugal.

Oddie’s international experience wa evident as he offered advice to McClintock, describing other areas in Europe, and further afield, where similar threatened natural areas have been sensitively improved by savvy governments and local authorities to provide exciting destinations for those millions of tourists who enjoy bird-related holidays every year.

“It would not take much to enhance the whole area. It easily could become a hugely popular international destination for bird and nature lovers” said Oddie who has seen the benefit to tourism that well-managed areas similar to Lagoa dos Salgados have brought to local communities.

“Diversity is the key. I have been coming to the Algarve for years and it's area that is wonderfully rich in bird-life so it seems to me that to build yet another tourist development, just like so many others, could be a financial and aesthetic mistake.”

Bill Oddie’s informed opinion will be welcomed by the 22,000+  signatories to the Save Salgados petition. His wildlife credentials are second to none and his long and successful career sees him now as a trusted face in support of the natural world - especially when it comes to birds.

Bill Oddie has been coming to the Algarve for years and knows the area well. Taking a rest from his busy filming schedule, he stayed in a holiday cottage overlooking the calm of the Ria Formosa between Olhão and Fuseta. Oddie kindly took the time to visit Salgados to offer his advice and support to the Save Salgados campainer Frank McClintock, and also to visit the Sagres Bird Festival.

Oddie's summing up on the Salgados tourist development scheme echoes the thoughts of many,  “This would be a totally unnecessary destruction of a wonderful area that could bring in many more visitors to the Algarve over the the long-term and for very little additional cost,” he commented while looking through his binoculars at the wide variety of birds on the lagoon, naming each species under his breath.

“If the authorities are really serious about seasonal tourism, as they claim to be, then this wildlife area is exactly the sort of thing they should be putting every effort into preserving and developing, and not by building over it.”

Bill Oddie became president of the West Midland Bird Club in 1999, having been Vice-President since 1991, and is a former member of the council of the RSPB. Oddie is also a vice-president of the League Against Cruel Sports and a vice-president of the British Trust for Conservation Volunteers. His most famous role in a long comedy career was the TV series in 'The Goodies' with Tim Brooke-Taylor and Graeme Garden.