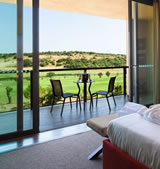 Founded in 2006 by António de Sousa and Fernando Esmeraldo, ECS is a private equity and restructuring company focused on the Portuguese market and manages three funds where it aims to ‘generate sustainable long term returns.’

ECS hit the headlines when it bought the derelict Salgados hotel and conference centre near Gale, assets of the CS Group (Carlos Saraiva), via its Tourism Recovery Fund, one of three funds focused on ‘acquiring defaulted or impaired corporate credits in order to recover companies with sustainable business models.’

ECS Capital now has gone one step further and has consolidated its various hotels and golf courses under one brand and today announced the launch of NAU Hotels & Resorts, which aims to "improve the tourism offer existing through a distinctive positioning able to attract the most demanding national and international visitors."

"By aggregating all of the assets under the same brand we will have more partnerships, more events and more advantages than if the hotels were being managed individually," explained the president of Nau, Pedro Almeida, who was Secretary of State for Tourism under Durão Barroso.

The CS Salgados hotel and conference project, which spearheaded the CS Group’s descent into bankruptcy with over €1 billion of debt, had lain derelict and forlorn in the hands of the creditors before being sold on and later completed.

ECS Capital, at that time was suspected of having only short term goals but its claim to buy and manage ‘distressed companies that have long-term economic potential’ seems to be justified and it is not averse to buying unfinished projects and completing them, if the price is right.

CS Group also owned the heavily indebted Morgado Reguengos golf and hotel enterprise at the time of its implosion and part of the land near one of the two golf courses later was sold on to the BES Real Estate Investment Fund which in March 2014 launched Quintas D'Al-Gariya.

The two golf course at Morgado de Reguengos, Morgado and Álamos are part of the new NAU Hotels & Resorts company, hopefully ending years of ever changing ownership and under investment.

In its press release, ECS Capital explains that the NAU Hotels & Resorts brand kicks off with "a wide range of high quality hotel assets and three golf courses that will allows it to take, from the outset, a leading position in the domestic market."

According to the company, NAU will run ten four-star superior and five-star hotels in the Algarve, Alentejo, Douro and Lisbon.

"We want to contribute to the valuation of assets that operate at the same time we provide unique and enriching experiences to our customers," concluded the president of the NAU Hotels & Resorts board of directors.