Picked up from the blog written by Mr Frank McClintock of the specialist boutique eco-hotel 'Paradise in Portugal,' legal protection for the Salgados wildlife area near Armaçao de Pêra, Silves is being sought "but we are not out of the woods yet."

"Salgados - this is the wetland in between Armação and Albufeira that we’ve been trying to save from being destroyed by over-rapacious development.

I was asked to keep stumm about this over the last year as we didn’t want my soap-boxing to spook the judges while they ruled on the admissibility of the corrupted Environmental Impact Assessment carried out by the developers.

I say “corrupted” as the developers EIA somehow failed to note the largest colony in the world of a CITES’ red-listed species of plant.

This is Linaria algarviana and it only exists in the Algarve … on the proposed development site this species has one of its last strongholds and this is made even more important by also being the largest.

Rather surprising that they missed it, don’t you think?! Any way, we noticed its absence from the report even if they didn’t in their assessment and we raised a stink and challenged it, and for the past year or so it has been going through the courts, but now the judgement has been made and it has gone in our favour with a total ban on any development until an impartial assessment has been carried out over the course of the next year.

We’re not out of the woods by any means, but for the time being we should celebrate this small stepping-stone victory and thank those hard working souls behind the scenes who have gained us some breathing space, principally SPEA, A Rocha, Quercus, Almargem and their lawyers who have got us this far."

"This is a site which RSPB in the UK would give their eye teeth to have and they would make it into a beautiful protected area. The variety of birds seen here is huge and the sounds as they feed joyous. What a shame the local council just sees it as a building site and not as the potential it has."

The RSPB fought for this place for ten years or so but eventually just threw in the towel.

We tried to keep them interested but they effectually said they'd had enough and we should just settle for the "restricted" development they'd negotiated with the developers.

Having contributed - along with many others - to their appeals for funds to aid them in their fight over the previous ten years and seen nothing but this collapse in their resolve, we, the Friends of Salgados*, took up the fight with the on-line petition.

We asked the RSPB at this point to help but had so little aid from them in any form whatsoever - in stark contrast to the Wildlife and Wetlands Trust and the British Trust for Ornithology - that I personally cancelled my long term membership, and I know several others who took the same decision regarding the same matter.

I know that the RSPB has a great many worthwhile sites and genuinely committed members, but their management strategy over recent years has become so anodine and money-orientated that they seem to have lost their way.

The RSPB might well covet the site, and we wish that we had the resources that they have, for we too would like to make this site the jewel in the Algarve's crown that it should be.

We have repeatedly requested access to the plans of the site so that we could advise the authorities of the correct way in which to build and site hides that would attract birdwatchers and tourists from all over the world, but have been rebuffed at every effort. It seems at the moment that these authorities have it in their minds to make nothing of this opportunity and we would love to have the clout of an organisation as large as the RSPB with which we could shape the future here for generations to come, but we have neither the clout nor the funds.

Be that as it may, we have at least saved the site for the last four years and prevented the rape of this last patch of coastline in the central Algarve. If we can continue in the same vein, at some point in the future a decision will have to be taken as to what strategy will have to be implemented as regards this whole area and we live in hope that at that time someone in the decision-making process will have the generosity of spirit to talk to us.

For now the best thing we can do is to fight on and keep promoting the petition! Please continue to spread the word.

P.S. "I was down at Salgados today; a Pectoral Sandpiper no less. An American vagrant not usually reported this side of the Atlantic - and there were quite a few photographers down there making the best of the golden opportunity." 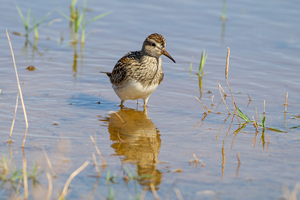 For all the articles about the Salgados 'Praia Grande' development, see:

* The 'Friends of Lagoa dos Salgados' includes the following organisations:

+7 #4 Ruth 2015-09-13 08:20
This is a site which RSPB in the UK would give their eye teeth to have and they would make it into a beautiful protected area. The variety of birds seen here is huge and the sounds as they feed joyous. What a shame the local council just sees it as a building site and not as the potential it has.
+10 #3 Frank McClintock 2015-09-08 11:05
My thanks also of course go out to all the thousands of people who signed the petition in the first place. Without this petition the land would already be built over and lost for ever and I can only say please keep the ball rolling by spreading the word and keeping people signing. Thanks again to all!
+11 #2 Janet McN 2015-09-07 21:30
Well done Salgados defence league. We're proud of you all for trying so hard to save this area which I use nearly every day for walks and fresh, clean air and the beauty of nature between the towers of Armacao and the built up area of the conference center.
+11 #1 Sarah B 2015-09-07 21:27
This is the best news ever. Now the save salgados team needs to see it through and get the land protected properly or the next government will just go back on the courts decision and let developers ruin this land.

How on earth did a environment minister think this was ever a good idea?
Refresh comments list