Paulo Portas breaks his silence on the submarine affair 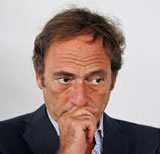 The Paulo Portas New Year message addressed the controversial submarine affair, stating that "none of the suspicions were true."

The leader of the coalition Social Democrats has spoken for the first time since the corruption case was conveniently archived and he took the opportunity of trotting out the age old assertion that the accusations against him were politically motivated.

"We knew from day one that none of the accusations were true," says Paulo Portas who was the Minister of Defence when the order was placed for the two submarines in 2004.

The Portas New Year's message to the party faithful included two paragraphs dealing with the submarine case which has seen him under suspicion of involvement in corrupt payments for over a decade.

"For 10 years, the Social Democratic party, its directors, its employees and myself have been insulted, slandered and attacked, always in the form of insinuation and without any respect for the independence and the truth of the judicial investigation. Over these 10 years we have put up with all of this with a remarkable calmness because we believe in the separation between politics and justice and because we knew from day one that none of the accusations were true," wrote Portas, stressing that now the case had been filed, "we will maintain calmness."

In the text, Paulo Portas stressed three points that in his opinion were not sufficiently emphasised:

"The prosecutor concluded that there was no favoritism to any potential supplier."

"The commissions or payments between companies have names and numbers that are unrelated to politics and did not benefit the party or its leaders."

Having highlighted these points, Portas attacked his opponents, for whom "it was never the law that was at issue, but fighting the CDS in whatever way, was. They never wanted the CDS in power, they wanted the CDS out of the Government."

"It’s this, and nothing more than this," concluded Portas, stating that the accusation that he had ‘exceeded the mandate’ given to him by the 2004 government run by Barroso and had been involved in a shady and illegal business were false.

Ferrostaal, one of the consortium companies, paid a total of €27 million to the intermediary Escom for success in the sale of the two submarines to the Portuguese State in 2004.

Of the money received by Escom, €5 million went to members of the High Council of the Espírito Santo Group including Ricardo Salgado, while €16 million ended up in the hands of three Escom directors and a consultant of Escom, Miguel Horta e Costa, the brother of Escom director Luis Horta e Costa.

A manager at Erbslöh, a Ferrostaal subsidiary, explained to prosecutors in Munich, at an earlier trial and successful prosecution of submarine consortium managers for bribing foreign governments, that the company's strategy was to hire consultants, under legitimate contracts, who were to work solely as ‘intermediaries.’

"Of the fees they received, the consultants channelled part of it to the decision makers, eventually to the government," said the witness whose compelling evidence that government employees did in fact take bribes remarkably has been ignored in Portugal as being too politically inconvenient.

The Escom money was spirited away to the Bahamas and nobody yet has traced where finally it ended up, apart from the ‘fees’ trousered by Ricardo Salgado and his cabal of family members at the top of the Espírito Santo tree.

Portas' indignation breaks years of silence which many took for a deep insecurity pointing to his involvement in this notorious affair.

His statements today may remain unchallenged as the case has been archived but if the other current investigations into money laundering, corruption and bribery throw up any pointers as to politicians benefitting from the Escom 'fees,' Portas may have to revise his statements.

-3 #4 Joao Coelho 2015-01-04 08:32
Is there anything such as obstruction of justice? How convenient that key documents are lost and nobody knows what happened.
-2 #3 Roger Talbot 2015-01-03 09:58
This case is yet another that shows how systems of policing corruption never existed either before or after the (1974) revolution. Intentionally no one is asking the real questions - which include :

Why was so many millions passed across for the Escom Consultancy and to the Espirito Santos Actually the same thing - E(spirito) S(anto) com ?

Surely it was government money - not a bank loan so not needing bankers?

And the Portuguese Government and military had a straight choice - German or French subs ?

And if there are court papers showing German money went to it - why is Escom's accounts not being examined ? Is there too much at stake ?

Were the Espirito Santo's skimming say 10% of all Portugal's inward investment - then divvying it up amongst the special people ? Or just for military projects?

So - is it the French who are actually keeping this on the boil? Their subs not being ordered by Greece either.
-3 #2 Enid 2015-01-02 16:29
What is the statute of limitations on the German case? As the Portuguese have shelved their end ... surely, in time, the Germans can release their case papers ?

And why haven't we heard of the BES minutes of the meetings for which the Espirito Santo's earned their Sub. consultancies (yes, really!) Or has Barroso's son shredded them as his contribution to the discussion ?

What is so fascinating about this affair is that apparently the Germans were also offloading these kinds of 'mini' subs on .... the Greeks.

Who, not now having the money to pay for them, are accusing the Germans of supplying 'subs that tilt'.
Wonky subs.

Now remember that the Portuguese subs are going back to the Germans for a 5 million servicing. Were theirs wonky too but ssshhh ?
-1 #1 Peter Booker 2015-01-02 09:32
Portas would be better keeping his mouth shut. He was a member of the government at the time of the scandal. He lost vital papers from the ministry of defence archives. He has never looked for or even wanted to find the recipients of the bribes.

He has now found a convenient scapegoat, but he and his colleagues in that government are irretrievably stained by this scandal. Perhaps he doesn´t need either self respect, or the respect of the electorate.
Refresh comments list