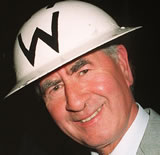 Ms Poole said: "He was a really, really nice man. Very bright, very intelligent. He came from a big theatrical family, a big show business family, and like all of them it was his life and it was very important to him and he was a hugely professional, very clever man."

Pertwee became the subject of internet rumours last year after the British Comedy Guide website reported that he had died on December 1, 2012.

At the time Doctor Who actor Colin Baker wrote: "Just heard about Bill Pertwee - lovely man - did a play with him - he was a true gent. V. sad."

Throughout the Seventies, Pertwee became a staple of British comedy culture, appearing in Love Thy Neighbour, The Dick Emery Show, Man About the House, and three Carry On films in as many years.

He also wrote three books, including an autobiography entitled A Funny Way to Make a Living, and in 2007 was made an MBE in the Queen’s Birthday Honours list for services to charity.

But it is as the argumentative air raid warden Hodges, that the comedy actor will be most fondly remembered. Pertwee appeared in sixty episodes of the BBC’s Dad’s Army from 1968 to 1977, regularly coming to blows with Captain Mainwaring and barking: “Put that light out!”

His son, Jonathan, led the tributes: “He would give everything a go. He was very dedicated to the people around him and to his charity work. But also he was very humble about the whole thing.

“He’d say ‘marvellous, isn’t it, to be in this business, because I’m not really a proper actor’, but he was extraordinarily versatile.”

Reflecting on the impact the long-running series had on his father, Mr Pertwee said: “He loved Dad’s Army. He loved the people in it, it was a big part of his life and he used to have a lot of fun with Clive Dunn and John Le Mesurier and Frank Williams and all of them. They just had a great bond.”

Pertwee's wife died several years ago and he is survived by his son, Jonathan.

John Laurie, who played Private Frazer, died aged 83 in 1980. Arthur Lowe, otherwise known as Captain Mainwaring, passed away two years later aged 66. John Le Mesurier died one year after that, in 1983, when he was 71 and Clive Dunn, long-term Algarve resident died in November 2012.