The Motörhead frontman’s reputation as one of rock’s most infamous hell-raisers belied his keen intelligence and interest in social and political issues.

Few musicians have walked the rebel’s walk with as much conviction as the Motörhead frontman Lemmy, who has died aged 70 after a short battle with cancer. Despite his high-profile image as a hell-raiser, Lemmy’s influence as a musician and songwriter should not be underestimated.

His bass guitar style was unique, combining a heavily distorted tone with chords for a sound that more resembled rhythm guitar. The amphetamine-fuelled tempo of Motörhead’s songs in the 1970s made the band – in any of its many lineups – stand out from the more leisurely heavy-metal sound of the day, inspiring younger admirers such as Metallica. Despite the rawness of his music, Lemmy’s melodies were indebted to classic 1950s rock’n’rollers such as Little Richard, giving Motörhead a recognisable and popular sound. Indeed, Lemmy always insisted that Motörhead were a straight rock’n’roll band, while all around him critics and fans told him that he played heavy metal.

Lemmy expressed his views of the world with great venom and precision on albums such as Overkill and Iron Fist, with audiences responding with enormous enthusiasm to songs such as Ace of Spades, Bomber and I Got Mine. While Motörhead’s songs were often a simple celebration of debauchery (Born to Raise Hell) or a general hatred of authority (Eat the Rich), he also addressed subjects such as the futility of war (Get Back in Line) and the tragedy of child abuse (Don’t Let Daddy Kiss Me). Never afraid of taking a stand about any issue that interested or irritated him, Lemmy committed his views on a variety of subjects for posterity in his 2002 autobiography, White Line Fever, and in an eponymous documentary in 2010.

‘Apparently I am still indestructible’

Almost uniquely in the field of heavy music, Lemmy was a thinker, debater and philosopher of great intuition and compassion. Interviewers were routinely surprised by Lemmy’s keen understanding of social and political issues, although he was far from optimistic about the progress of mankind. “The world’s going to end up with everybody sitting in their room punching keyboards,” he said. His antagonism towards religion, governments and indeed any established authority was legendary.

Lemmy’s deep-rooted interest in history fuelled his controversial habit of collecting Third Reich memorabilia. He recalled that visitors to his West Hollywood apartment would blanch at his huge assortment of Nazi daggers, flags, medals and uniforms, to which he would riposte: “Well, my black girlfriend doesn’t have any problems with it, so I don’t see why you should.” He once explained: “By collecting Nazi memorabilia, it doesn’t mean I’m a fascist, or a skinhead. I just liked the clobber. I’ve always liked a good uniform, and throughout history, it’s always been the bad guys who dressed the best: Napoleon, the Confederates, the Nazis.”

He was born Ian Kilmister on Christmas Eve 1945, later celebrating the date with typically dry humour in Motörhead’s song Capricorn. An only child, Lemmy lived a relatively solitary existence, first in Stoke-on-Trent and then in rural north Wales, where his nickname was bestowed upon him by locals. (Contrary to later rumours, he insisted it was not derived from the phrase, “Lend me a fiver”.) Lemmy’s father, an army chaplain, left the family when he was young: as a result, Lemmy was close to his mother and always enjoyed the company of women.

After leaving school he worked as a horse breeder and on a factory assembly line before taking up the guitar and heading to London in order to take advantage of the burgeoning counterculture. He imbibed copious quantities of LSD as a roadie for Jimi Hendrix in the late 1960s and early 70s, and then as a bass player with space-rock band Hawkwind. He said that hallucinogens made him more tolerant. In the late 70s and 80s, Lemmy took amphetamines in order to battle exhaustion when his band Motörhead toured for months on end. Even when he restricted his drug use from the 1990s onwards, due to hypertension and diabetes, and underwent an operation in 2013 to implant a cardioverter-defibrillator into his chest, Lemmy continued to drink and smoke: “Dogged insolence in the face of mounting opposition to the contrary,” as he put it. These habits did not define Lemmy, however: he was far more than a rock’n’roll cliche.

In 1975 Lemmy was fired from Hawkwind after being arrested for drug possession on the Canadian border while on tour. His response was to form Motörhead with the guitarist Larry Wallis and the drummer Lucas Fox, although his manager dissuaded him from his initial choice of Bastard as a band name. After some early attempts to gain a profile, Motörhead’s personnel stabilised as Lemmy with the guitarist “Fast” Eddie Clarke and drummer Phil “Philthy” Taylor, the lineup which many fans regard as Motörhead’s finest and which was certainly the band’s most commercially successful. Their golden era – 1979 to approximately 1983 – peaked with the live album No Sleep ‘til Hammersmith, which reached No 1 in the UK.

Lemmy of Motörhead – a life in pictures

The musicians backing Lemmy came and went in subsequent years, but he kept the band going through many difficult times. The current Motörhead lineup, featuring the guitarist Phil Campbell and the drummer Mikkey Dee, is its longest-serving to date, having toured and recorded without a break since 1995.

Lemmy never married, explaining on many occasions that the love of his life had been Susan Bennett, a girlfriend who had died aged 19 from a heroin overdose. This early heartbreak fuelled a lifelong hatred of heroin, and contempt for ineffectual governmental attempts to curb its use. One of many surreal meetings of minds between Lemmy and the establishment came in 2005, when the Tory politician William Graham invited him to address the Welsh Assembly on the subject of heroin. To Graham’s embarrassment, Lemmy recommended the drug’s total legalisation. “Lemmy certainly has an alternative solution to the one presently being tried,” said Graham after the debacle.

He was a man bruised by his upbringing, but who loved his son, Paul, with whom he was reunited in middle age after decades of separation. He adored and respected women, but worked his way through hundreds of one-night stands (“I’ve had my share … and yours too!” he chuckled). His music was abrasive, but his tastes were cultured: Monty Python and PG Wodehouse were lifelong companions. “I’ve had a whale of a time out of rock’n’roll,” he once said, “and rock’n’roll has had a whale of a time out of me. That’ll do.”

As one saddened fan today said, "I didn't even realise Lemmy could die. Rock on Lemmy.!"

He is survived by his son. 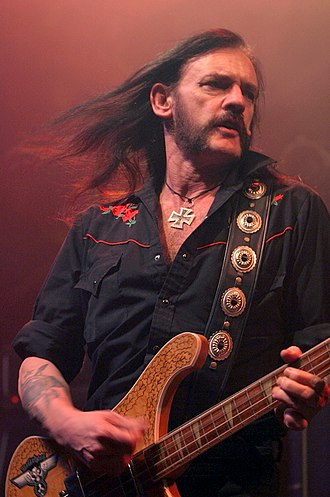 0 #1 Truth hurts 2015-12-31 09:16
I dont know who the hell thought back in 1975 that this long haired scruff, worzell gummage timewaster had any talent, but the shre did hood job marketing this guy to the masses.

The couldnt sing, couldnt play, ugly as hell, and a hell raiser???
This bloke had friends in music press, anyone with ears could tell you that motorhead and lemmy aint got 0 to with music.

In uk if u got talent, u will get nowhere, but if you a lemmy type u get to be framed as a god.