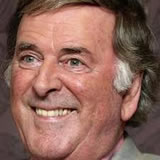 Sir Michael Terence "Terry" Wogan, KBE DL (3 August 1938 – 31 January 2016) was an Irish radio and television broadcaster who worked for the BBC in the United Kingdom for most of his career.

Before he retired from his weekday breakfast programme Wake Up to Wogan on BBC Radio 2 in 2009, it had eight million regular listeners, making him the most listened-to radio broadcaster in Europe. Wogan began his career at Raidió Teilifís Éireann where he presented shows such as Jackpot in the 1960s.

Wogan was a leading media personality in the UK from the late 1960s and was often referred to as a "national treasure". He was known in the United Kingdom for his BBC One chat show Wogan, presenting Children in Need, Wake Up to Wogan, the game show Blankety Blank and Come Dancing and as the BBC's commentator for the Eurovision Song Contest from 1971 to 2008. Wogan currently presents a two-hour Sunday morning show, Weekend Wogan, on BBC Radio 2.

Wogan was granted an knighthood in 2005. He held dual British and Irish citizenship and was thus entitled to use 'Sir' in front of his name

Wogan was the subject of This Is Your Life in 1978 when he was surprised by Eamonn Andrews at Broadcasting House. In the first ‘hit’ of its kind, Eamonn interrupted Terry’s BBC Radio 2 morning show to surprise him live on air.

Wogan was appointed an Honorary Officer of the Order of the British Empire (OBE) in 1997 and elevated to an Honorary Knight Commander of the same order (KBE) in the Queen's Birthday Honours in 2005. After asserting his right to British citizenship (he retains his Irish citizenship) that year, the knighthood was made substantive on 11 October 2005, allowing him to use the style "Sir". On 29 May 2007 he was made a Deputy Lieutenant of Buckinghamshire.

On 15 June 2007, Wogan's home City of Limerick honoured him with the Freedom of the City at a ceremony in Limerick's Civic Hall. The Freedom of Limerick honour dates from medieval times and the City received it charter from Prince John in 1197. Because of his long absence from the city as well as some well remembered, less than flattering remarks about the city in a 1980 interview, the local press carried out a vox pop which resulted in unanimous support for the award. He has since acknowledged the strength of character of the local population who "never give up ... never say die and ... are never beaten." "Limerick never left me" he is quoted as saying and "whatever it is, my identity is Limerick." In 2004, he received an Honorary D.Litt. degree from the University of Limerick as well as a special lifetime achievement award from his native city.

Wogan was inducted into the Radio Academy Hall of Fame at a gala dinner held in his honour on 10 December 2009.

Wogan received an Honorary LL.D. degree from Leicester University in 2010.

Wogan was announced as the Ultimate Icon of Radio 2 commemorating the station's 40th birthday. The shortlist of sixteen candidates had been published on the BBC Radio 2 website and the winner was announced live on Radio 2 during Family Favourites with Michael Aspel on 30 September 2007. He praised his fellow nominees, The Beatles, Diana, Princess of Wales and Nelson Mandela during his acceptance speech which was broadcast live on BBC Radio 2, and he chose Nat King Cole's Stardust as his Iconic Song of the last 40 years, which Wogan had chosen twice before as his favourite record on BBC Radio 4's Desert Island Discs.

On 25 April 1965, Wogan married Helen Joyce. They have four children, and five grandchildren:

In April 2013, Wogan was invited by the family of Baroness Thatcher to attend her funeral.

Wogan was brought up a Roman Catholic and educated by the Jesuits and the Redemptorists. In an interview with Gay Byrne on the RTÉ religious programme The Meaning of Life and in the Irish newspaper The Sunday Independent, he stated that he is an atheist but respects those who have "the gift of faith."

Wogan died on 31st January 2016. His family's statement was, "Sir Terry Wogan died today after a short but brave battle with cancer."