Wilmer was born in Brentford, Middlesex and received his education at King's School, Canterbury, and Stonyhurst College. Whilst in training as an actor at Royal Academy of Dramatic Art in London, he was conscripted into the British Army for military service with the Royal Artillery in World War II.

After training he was posted to an anti-tank battery, and saw war service in Africa with the Royal West African Frontier Force. He was later invalided out of the Armed Forces having contracted tuberculosis.

He made his theatre stage debut in 1945 in repertory at Rugby. He appeared frequently on the London stage, mainly in classical and Shakespearean roles.

He made his first major film appearance in Laurence Olivier's Richard III (1955); thereafter he appeared in a large number of films, mostly in supporting roles.

He is mainly associated with the role of Sherlock Holmes which he first played in the BBC's 1964 production of The Speckled Band. Together with co-star Nigel Stock, who played Doctor Watson, Wilmer was brought back for a further twelve episodes of the Sherlock Holmes series.

In 1973 Wilmer played author Jacques Futrelle's Holmesian detective Professor Van Dusen in The Rivals of Sherlock Holmes for ITV. In 1975 he once again appeared as Holmes (albeit in a supporting role) in Gene Wilder's The Adventure of Sherlock Holmes' Smarter Brother, with Thorley Walters as Dr. Watson. Wilmer also played Sir Denis Nayland Smith in two Harry Alan Towers' Fu Manchu films The Brides of Fu Manchu (1966) and The Vengeance of Fu Manchu (1967).[4]

He recorded a series of the stories on audiocassette for Penguin audio books[3] and has appeared as a guest at several UK and US events, the most recent being the Society's Golden Jubilee Dinner in January 2001.

His other television credits include: The Adventures of Robin Hood, The Saint, The Troubleshooters, The Avengers, The Baron, UFO, and Space: 1999. He made a cameo appearance in the "The Reichenbach Fall" episode of Sherlock as an irate old man in the Diogenes Club.

Wilmer was an honorary member of the Sherlock Holmes Society of London which considers Wilmer " the definitive Holmes".

On 24 March 2009 Wilmer was guest of honour at a launch party for his book held at the National Liberal Club in Whitehall Place, London.

On 16 February 1946 he married Elizabeth Joan Melville in Westminster. In his later years, he resided in Woodbridge, Suffolk.

On 31 March 2016, after a short bout of pneumonia, Wilmer died at age 96 at Ipswich Hospital in Suffolk, England.

Roger Moore posted on social media the same day that Wilmer had died; the actors had worked together in the James Bond feature film Octopussy (1983) and on the television show The Saint (a 1963 episode). 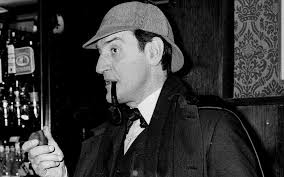