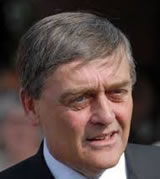 He was the son of Robert George Grosvenor, 5th Duke of Westminster and The Hon. Viola Maud Lyttelton. He was Chairman of the property company Grosvenor Group. The Prince of Wales and Duchess of Cornwall are "deeply shocked and greatly saddened" by the sudden death of their friend.

Grosvenor was educated at Harrow School and the Royal Military Academy Sandhurst. In 2005, he became Chancellor of the University of Chester.

Via Grosvenor Estates, the Duke was the richest property developer in the United Kingdom and one of the country's largest landowners, with vast estates in Oxford, Cheshire and Scotland, as well as large areas of Mayfair and Belgravia in Central London, Liverpool City Centre, and elsewhere in Europe.

According to the Sunday Times Rich List 2016, the Duke was worth £9.35 billion (c. US$13 billion), placing him sixth in the list and making him the third-richest British national. However, he lost around US$1 billion due to the United Kingdom's decision to leave the European Union in June 2016.

The Grosvenor family's first development was in Mayfair, central London, in the early 18th century, the second big development came around 100 years later and was another exclusive part of London - Belgravia developed by the family after the end of Napoleonic Wars and the conversion of Buckingham Palace - which is just one mile east. After developing the two parts of central London, the family business expanded.

During the second half of the 20th century, the business expanded into the Americas and developed Annacis Island and Vancouver in Canada in the 1950s. The family business started developing in Australia in the 1960s.

They then moved to Asia in the early 1990s and continental Europe just before the millennium. In April 2000, the firm moved into new London officers and the business was headed by Gerald Cavendish Grosvenor, who was Chairman of the Trustees.

Grosvenor owned La Garganta is in the Castilla La Mancha region of central southern Spain. It became part of the Grosvenor Estate in 2001, since which time it has been awarded the Bellaeuropa Award for excellence in environmental management.

The landscape ranges in altitude from 585 metres to 1,266 metres above sea level and with a richly diverse flora and fauna. La Garganta is one a few places in Europe where a number of rare species are to be found, including the Lynx and the Spanish Imperial Eagle.

The principal economic activity is agriculture with groves of around 19,000 Olive trees, some 3,700 acres under cereal production, and 34,000 Evergreen Oak trees, the bark of which is harvested commercially to make cork.

The Duke's Reay Forest Estate in North West Sutherland, consists of two distinct areas, Kylestrome and Lochmore. Known for its wild and remote beauty, this part of Scotland is recognised as an area of outstanding natural beauty and is home to the famous peaks of Ben Stack, Arkle and Foinaven. The landscape lends itself to the development of the generation of green energy through flow of water hydro electric schemes. The earliest turbine was installed in the 1920s.

The Eaton Estate is home to villages and fertile farmland just outside the city of Chester. The estate includes the thriving villages of Aldford, Eccleston and Saighton. It contains some 450 homes, farms and businesses, six schools and over 10,000 acres of high quality agricultural land in Cheshire, North West England. At its heart sits Eaton Hall, the Duke of Westminster and the Grosvenor family's home.

The history of the Eaton Estate can be traced back to the early 1440s; its story is inextricably linked with those of the Grosvenor family and the city of Chester.

After leaving Harrow with two O-levels, then Earl Grosvenor, he joined the Territorial Army in 1970 as a trooper.

After entering RMA Sandhurst in 1973, he passed out as an Officer Cadet and was commissioned a Second Lieutenant in the Territorial and Army Volunteer Reserve of the Royal Armoured Corps (Queen's Own Yeomanry) on 13 May 1973.

He was promoted to Lieutenant on 13 May 1975 and to Captain on 1 July 1980. He was subsequently promoted to the acting rank of Major on 1 January 1985 and to the substantive rank on 22 December.

Promoted to Lieutenant-Colonel on 1 April 1992, he subsequently commanded the North Irish Horse, the Cheshire Yeomanry Squadron, founded by his ancestors, and the Queen's Own Yeomanry. He was promoted to colonel on 31 December 1994 and was appointed Honorary Colonel of the 7th Regt. Army Air Corps (1 January 1996) and the Northumbrian Universities Officer Training Corps (30 November 1995). Promoted to Brigadier on 17 January 2000, he was also appointed Honorary Colonel of the Royal Mercian and Lancastrian Yeomanry on 14 May 2001. He was also appointed Colonel-in-Chief of the Canadian Royal Westminster Regiment, the North Irish Horse and as Colonel

The Duke was Grand Prior of the Priory of England of the Military and Hospitaller Order of St. Lazarus of Jerusalem, 1995–2001.
In 2004 the Duke was appointed to the new post of Assistant Chief of the Defence Staff (Reserves and Cadets), with promotion in the rank of Major-General.

In March 2007, having served in the Ministry of Defence as Assistant CDS for four years, he handed over responsibility for 50,000 Reservists and 138,000 Cadets to Major-General Simon Lalor, in the wake of the Eliot Spitzer prostitution scandal in which Grosvenor was also implicated. The Duke became Deputy Commander Land Forces (Reserves) in May 2011. He retired in 2012.

He was appointed Companion of the Order of the Bath (CB) for his "military service" in the 2008 Birthday Honours. He is also an Honorary Vice-President of the Royal United Services Institute (RUSI), and a member of the International Advisory Board of the RUSI.
He was appointed Commander of the Royal Victorian Order (CVO) in the 2012 Birthday Honours for "service as a member of the Council of the Duchy of Cornwall".

As a child the Duke lived on an island in the middle of Lough Erne. His early education was in Northern Ireland before attending Sunningdale School and Harrow School.

The Duke of Westminster married Natalia Ayesha Phillips, the daughter of Lt-Col. Harold Pedro Joseph Phillips and his wife Georgina Wernher, in 1978. His wife is a direct descendant of the Russian poet Alexander S. Pushkin and therefore of his African ancestor Abram Gannibal as well as of King George II.

He supported a number of charities and good causes, including making a £500,000 donation to farmers during the 2001 foot-and-mouth outbreak.

Of his wealth he once said: "Given the choice, I would rather not have been born wealthy, but I never think of giving it up. I can't sell. It doesn't belong to me."

The Duke suffered a nervous breakdown and depression in 1998, saying he had been overcome by the pressures of business and the great number of public appearances he was making.

The Duke died on 9 August 2016 at Royal Preston Hospital in Preston, Lancashire after suddenly becoming ill at his Abbeystead estate the previous day.