Before I start the regular month end MIS report for May I felt it only right that I should share the following recent article in The Economist - Europe's angry voters;  which is very relevant after some of the results in last week´s elections in some EU member states. Personally I have always found The Economist to be a high quality publication.

Significant increase +% changes, by individual countries, have been: 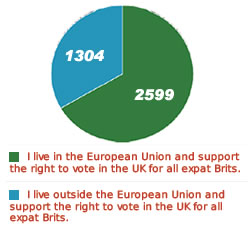 PETITIONS:
1. To sign the Stop the Governments victimisation of pensioners living abroad who have contributed to the welfare state by withdrawing their winter fuel payment petition; http://epetitions.direct.gov.uk/petitions/52121 currently standing at 16,343 - link to above to read the Government response. This petition closes on 28.06.14. The minister responsible is Steve Webb MP - Minister of State for Pensions.
Contact details; webbs@parliament.uk

2. To sign the Create MPs for expatriates similar to the French model petition; http://epetitions.direct.gov.uk/petitions/55085 currently standing at 3,450 signatures. This petition closes on 13.09.14. The minister responsible is Greg Clark MP - Minister of State for Cities and the Constitution.
Contact details gregclarkmp@parliament.uk.

PROGRESS REPORTS:
• Harry Shindler MBE
Following on from the meeting in January, which was attended by Harry´s Solicitor / Avvocato, of the European Parliament - Committee for Petitions, Brussels, we are now waiting an official response from the UK Government to the European Parliament recommendation that the UK is "punishing" its expats for leaving the country by denying them the right to vote!" http://europa.eu/rapid/press-release_IP-14-77_en.htm This response is, not surprisingly, still overdue!!
Harry is currently proceeding and preparing his application to the UN and we now wait to hear from Harry´s Solicitor / Avvocato, Charlotte Oliver of Italian law firm Oliver & Partners, Rome; http://www.oliverpartners.it/shindler-case-will-not-be-referred-to-the-echr-grand-chamber/ regarding further instructions.

Bills currently before the UK Parliament concerning Britain’s relationship with the EU:
1. EU Membership (Audit of Costs and Benefits) Private members Bill Mr Christopher Chope MP. The second reading has now been scheduled for 16th May.
Objective - to set up a Commission to examine the current costs and benefits of the UK’s membership of the European Union. This Bill failed to progress and is now dead.

2. European Communities Act 1972 (Repeal) Private Members Bill Mr Philip Hollobone MP. The second reading has now been scheduled for 16th May.
Objective – to take the UK out of the European Union. This Bill also failed to progress and is now dead.

3. European Union (Withdrawl) Private Lords Members Bill - Lord Pearson of Rannoch. No date for any debate has yet been announced. This Bill also failed to progress and is now dead.
Objective - to take the UK out of the European Union.

4.The Pensions Bill Government Bill by Mr Iain Duncan Smith MP. This has almost completed its stages in the House of Lords. It has numerous amendments which have to be debated back to the Commons. Expatriate Pensioners and Prisoners are covered under the same heading! However, Clause 20 still remains which would enable pensions to be "frozen" for British Citizens in the EU if the UK were to leave the EU!! This Bill has received Royal Assent and is now law!
Objective - The establishment of a new basis for pensions.

ADDITIONAL ITEMS OF INTEREST:
• The Electoral Commission and Foreign & Commonwealth Office (FCO) - The Electoral Commission online registration campaign, Expat Registration Day, was launched on 26th February 2014, which Votes for Expat Brits and other expat organisations have been very pro active in supporting. We now await their round-up report of how the campaign went and the finalised figures for the number of forms downloaded.

• British Government´s UK vs EU Balance of Competances Review - If you have not already done so please remember to complete and mail off your form; https://www.gov.uk/government/consultations/voting-consular-and-statistics-review-of-the-balance-of-competences and click on Voting Response form. If you have a lot to write and say, you can pull down the bottom line of each of the five boxes. This is now an absolute top priority after the results, of some EU member states, in the recent European Parliament elections! Closes on 2nd July 2014, therefore not much time left!!

• ETTW - The Europeans Throught the World - The new ETTW website is now up and running and can be viewed; www.euromonde.eu. It is updated on a regular daily basis. ETTW also recently formed the following three working groups:

1. A new European Diaspora Policy in co operation with the incoming Latvian EU presidency will have its first meeting on June 5, with video link to the government in Riga. Aldis Austers and their volunteer Steen Illeborg (ex-director in the Committee of the Regions will be co-chairing it)

2. Young European Expats will start working very soon under the chaimanship of another volunteer, Marina Buna, in Brussels. This initiative is also being supported by New Europeans; https://www.youtube.com/watch?feature=player_embedded&v=CmtxUdrERQE and please see below.

3. Electronic Voting is starting and being chaired by their Danish volunteer Povl Christian Henningsen and Max Oillic from European Citizens Abroad; http://www.europeancitizensabroad.eu/
• New Europeans - New Europeans have been very pro active this month and their website can be viewed; www.neweuropeans.net It is also updated on a regular daily basis. As mentioned above they are also supporting the Young European Expats initiative launched by ETTW. Let´s all now energise the campaign with younger expats as they are the future!

4. Phone Ins - There have recently been several Phone Ins which very much have an impact on British citizens now living abroad and despite many of us forwarding our questions nobody has to date yet been contacted and interviewed online. Unfortunately this still appears to be the case which is very disappointing and caused both frustration and annoyance amongst a great number of Britsh expats.

VOTER REGISTRATION:
How to do it - Provided you are not affected by the current arbitrary cut-off rule, of having lived 15 years outside of the UK, you are still entitled to vote in European Parliament, UK Parliament and other UK bodies. To find out click on; https://www.aboutmyvote.co.uk/register_to_vote/british_citizens_living_abroad/register_to_vote.aspx for details. It is important that we get as a matter of priority the registration levels up very significantly and urge you, and any of your friends and colleagues who are similary qualified, to register immediately!

CONTACT DETAILS:
1. To contact your last MP (provided, of course, you still have one and haven´t yet been disenfranchised!) http://www.parliament.uk/mps-lords-and-offices/mps/

2. To contact your last UK MEP for a list of all EU MEPs by country; http://www.europarl.europa.eu/meps/en/map.html;jsessionid=D556B1A10D13DFFCCC071536BB4D671D.node1
3. To contact British Newspapers and/or Overseas English Language Expat Newspapers http://www.world-newspapers.com/

SUPPORTING BLOG SITES:
Pensioners Debout; http://pensionersdebout.blogspot.fr - this is of course the site of Brian Cave from the Lot, France and Brian is always more than delighted to hear from and assist people who have problems with issues concerning Double Taxation Treaties, Healthcare and other expat related problems; lefourquet@gmail.com.

Pensioners Battle with UK; http://www.clivewalley.com/292654985 - this is the site of Clive Walley who lives in the Alicante region of Spain who is a very pro active campaigner.

Frightened Politicians; http://westminster-gossip.blogspot.fr/ - this is the site of Adrian Milne who lives in the Languedoc region of France who has been a long time supporter.

If you know of any similar campaign sites please let me know and I will include them in our next month end report. Why not start your own campaign blog site?

WHAT YOU CAN DO FOR THE CAMPAIGN:
Once again, please forward this mail to all your friends, families, colleagues and social media contacts. If you were forwarded this mail and wish to go on our regular mailing list contact graham.richards@orange.fr.

This website is provided by the British Community Committee (BCC) of France, britishinfrance, as a public service to all British expats worldwide - www.votes-for-expat-brits.com.
You can find out more about the BCC and the activities of its member organizations by clicking on - www.britishinfrance.com