Portugal's property prices fell by 0.9 per cent in Q3 2014 from the previous quarter, according to Eurostat's latest figures, Prices were 4.9 per cent higher though, compared to the same three months in the previous year.

The market's gradual stabilisation is fuelled by a growing number of property sales, as buyers from the UK and USA take advantage of the euro's weakness against the pound and dollar. Indeed, according to the latest survey from the Royal Institution of Chartered Surveyors and Confidencial Imobiliario, sales of Portuguese real estate rose in December 2014 for the 12th month in a row.

As a result, the country's balance between housing supply and demand has improved, a process that has been supported by the country's smaller size, especially compared to the neighbouring market of Spain.

Buyers are also entering the market from further afield, as Portugal's "Golden Visa" scheme helps to drive interest. The scheme, which offers residency to non-EU buyers in exchange for investing in property worth at least €500,000, was one of the first to be introduced in Europe, helping to generate over €1 billion of investment in its first two years. Chinese buyers have dominated applications for the permits, particularly favouring real estate in cities such as Lisbon. 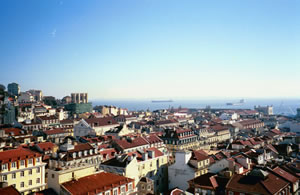 Research from TheMoveChannel.com reveals that demand for Lisbon property has soared in recent years. Searches for the Portuguese capital on the international property portal climbed 55 per cent in the 12 months to February 2014 compared to the same period in 2012, making it the most sought-after location in the country.
The Algarve's appeal, though, remains strong, with affordable prices bringing a growing number of bargain holiday home hunters to the famously sun-soaked beaches. In the fourth quarter of 2014, Albufeira and Tavira were both in the top 10 most searched-for locations on TheMoveChannel.com worldwide.
Overall, enquiries for Portuguese property surged 25 per cent quarter-on-quarter in the final three months of last year, the second quarterly increase in a row. (Enquiries for real estate in Portugal climed 41 per cent in Q3 2014 compared to the previous quarter.)
Even as concerns are renewed surrounding the euro following the Greek elections and the ECB's announcement of QE, TheMoveChannel.com predicts that the trend is set to continue in 2015, as international buyers continue to take advantage of favourable exchange rates and residency permits. Indeed, activity on the portal this year is already ahead of last year's pace, with Q1 2015 currently on course to receive 12 per cent more enquiries for Portuguese property than Q2 2014.