Baobab to you too

We bounce and rock and sometimes roll down that track, an unmade road, sundown is in forty minutes. Then the sand and deep ruts slow us down and we slew and slide all around, in second gear. 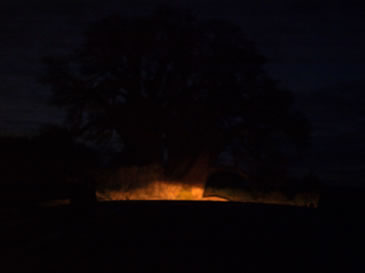 The Ketchup Queen turns her head, “Chapman’s” more impressive let’s go there instead. It’s only another ten K.”

So our speed increases to manic heights and we in the back just hold on tight and pray. With our first goal now null and void the praying couple are not overjoyed, just breathing heavy.

Elephants and lions quickly step aside looking for a place to hide, from our projectile.

Those in the back just grit their teeth and hope they won’t come to grief, Ping Pong, Ping Pong.

Ten minutes later our road runs out and suddenly we are in no doubt, that this is DAFT!!

We slow for a guy after another ten K but he doesn’t really have much to say,  only “Petrol, Petrol?”

He looks longingly at our jerry cans but all we say is, “Sorry old man, Diesel, only Diesel.”

The GPS then speaks with her dulcet tones, “in twenty kilometres turn for home,”  we should be so lucky.

More calculations are done at speed and they pressure us even more to succeed, before the stars arrive.

Common sense then remarks, “It will be dark soon so let’s wait for the moon.” Such is wife.

My head keeps getting constant reminders, hitting the roof of the B.Pathfinder, reshaping, hurting.

The sun disappears to no-one’s surprise and breathing continues along with sighs.

We pass salt “pans” and then some more with feet pressed firmly to the floor, bracing in the dark.

Then we traverse that final pan and relief reaches every man and woman, we have arrived.

There are just ten lumens left in the sky barely enough to feed our eyes, on Chapman’s Baobab.

We all share the relieving celebration with full beam providing illumination,  the stars are with us.

Thirty metres is an impressive parameter particularly when applied to a diameter. We walk round a fat tree.

“Its roots apparently I have read have a two hundred and fifty meters spread,” impressive, really impressive.

Then the camera refuses to function at least something has got some gumption.

Even with the main beam on!!

The shutter just won’t cooperate after all it’s getting late, then clicks once, twice.

Just in order to clear the air. “I’m driving,” I declare, “Someone else can bounce.”

The sky is black as Joseph’s face and we turn for home at a measured pace. Normal breathing has resumed.

We then go round in circles would you believe the GPS doesn’t want to leave. Searching, searching.

Finally it makes a connection and we set off in the right direction, hopefully, hopefully.

We settle down and slowly pierce the night and then to every ones delight, “Petrol-less” reappears.

But still our friend has had no luck, his friend has arrived but he’s now stuck. Digging, digging him out.

We wave farewell whilst dogs bark at our side and rabbits just dip and dive. Getting closer, nearly home.

We see red lights twinkle in the night and then at last aerials come into sight. We’re going to make it.

The relief of real land is great we’ll be back at the camp before half past eight. And eating food.

If there is a moral to this tale it must simply be “Don’t Fail,”

But start off earlier.