The term Portuguese driver is a phrase heard often around the expat community. This weekend the next generation demonstrated their extraordinary ability to manoeuvre at high speed in an eight vehicle train, just millimetres from the driver in front in an exciting event hosted at the Kartódromo Internacional do Algarve. The Rotax Trophy event was a six venue series culminating in the climax at the Portimao circuit. 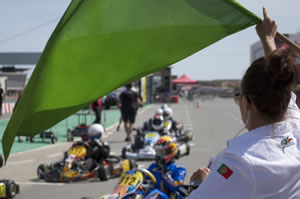 Seven different categories of karts ranging from the Micro, where competitors are already completely competent to race by the age of six through to the Masters, where you have to be a mere thirty two years old.
Whilst many of the competitors will remain driving karts some will be dreaming of this being a step on the ladder to becoming a formula one champion in the future. Karting is indeed a sport suitable for the whole family to partake and a friendly family environment was very evident despite the high stakes involved.

Now in its eighteenth year, the most prestigious event in the karting world is the Rotax MAX Challenge Grand Finals. In order to be invited to race in this event you must win in your home country, so for everyone involved this weekend victory could mean racing again at the Kartdrome over seven days in November when, from 50 countries the finest 360 of the 15,000 teams who entered are expected to descend upon the Portimao track to battle for the ultimate title.

For the teams, first though remains the small matter of qualifying to represent the nation amongst a group of ninety other highly motivated and talented drivers. However this was not just a Portuguese affair, as teams from across the world, some already qualified for the finals were using this opportunity as a testing and learning experience.

Sitting on the grid waiting for the start drivers know that their chassis, tyres and fuel are all identical. The strictly regulated and randomly selected Rotax engines supplied by the organisers 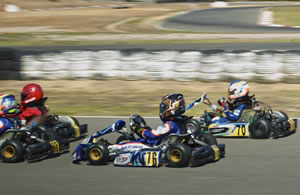 ensure a level playing field for all entrants, so driving ability is everything.

Across all classes the championships remained undecided leading to some exciting races for the many spectators.

The Micro class saw pilot João Oliveira starting with a 6 point lead over his closest rivals.
Managing to be the first Portuguese to cross the line in 4th behind Croatian Leon Zelenko, Argentinian Felipe Bernasconi and Hungarian driver Menyhert Krozser became the first of the locals to secure a place in the finals.

In the Mini category Spaniard Marco Aguilera Lopez who races in the Portuguese league overcame a 3 point deficit over his Norma Racing team mate David Simoes winning his races while Simoes struggled.

The Junior class, for 12 to 15 year olds saw a day to remember for Guilherme Oliveira and a day to forget for Rodrigo Ferreira who gave away a one point lead ending his hopes for reaching the grand finals. Paraguayan, Joshua Durskin took line honours in both races with Oliveira 2nd, having previously won the Portuguese Youth Karting Cup in 2016 has now reached another finals in this young mans career.

In the Max category Hungary's Kovacs Zsombor dominated winning both of the days finals.
The Portuguese title was between two drivers, Alex Areia trailed Goncalo Coutinho by 6 points.
In final number one the pressure was getting to both as they contested the lead before both ran wide eventually finishing 9th and 5th respectively. Areia remained calm for the second final although Coutinho only needed to follow him home to secure the coveted November invitation and his first return to the finals since 2011. 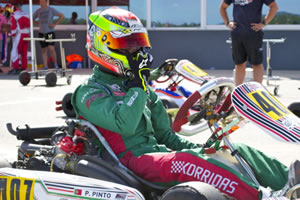 DD2, for drivers 15 to 31 years of age saw Porto pilot Pedro Pinto coming in to the weekend knowing his points lead in the series was probably enough to secure a seat in November barring any mishaps. The 14 lap sprint saw him take the lead early in both races keeping all of his challengers close behind.

The Masters had seen Vitor Mendes of Porto win 8 of the 10 previous finals and he became the final pilot to secure a drive in the finals.
Some very close racing along with the lack of incidents or accidents in all divisions showed the calibre and professionalism of the young drivers. The finals are probably free to attend where you can roam around the paddock as well as witness some great motorsport action, so remember to add this to your diary. Nov 4 – 11 Rotax MAX Challenge World Finals.