The Yacht Club of Portimao hosted the final act of the UIM-ABP Aquabike European Continental season, the Endurance Championship over the weekend 27/29 October.

Aquabike, often referred to as jet-ski was sanctioned in 1995 by the Monaco-based Union Internationale Motonautique (U.I.M.) the world governing body for all power boat racing. Jet-ski’s are ridden in the stand up position, whereas Aquabikes are similar to a motorcycle, rode whilst sitting.

Endurance racing is held on open water close to shore with the closed-course circuit between 5km and 20 km long. Similar to land based endurance events, the race begins with the pilots running to their craft, although through sand. They then have to consider when to take refuelling pit stops as well as pilot changes.

H2O Racing, the worldwide promoter described Aquabike as one of the fastest, most demanding, entertaining sports on the water, and the people at Praia de Rocha lucky enough to be soaking up the late summer weather were rewarded with some spectacular action packed edge-of-the-seat racing.
Attracting some of Europe's premier riders, included the Portuguese and Iberian National Endurance Champion, the Iberian European Champion, French Champion of Endurance plus Italian and Spanish Champions, the Portimao entrants were guaranteed some tough competition across the two day event. 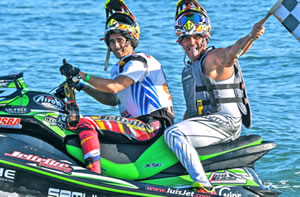 Commencing at midday saturday, race director Freddy Jorge dropped the flag to begin what would be a superb day of racing with Portuguese riders showing a strong resilience, topping the standings at the end of the day of their home Grand Prix.
After 02h09m15s the duo of Carlos Truta and Filipe Filipe powered their Kawasaki to a slender 13.54 minute advantage over France’s Roland Couhet and Arnaud Bourreau's Kawasaki, with Italian pairing Michele Cadei and Stefano Ciani also on a Kawasaki just 20 minutes behind the overnight leaders.
Sunday continued with Truta and Filipe dominating the Runabout category taking the overall title as well as the GP1 Class honours clinching the 2017 UIM-ABP Aquabike European Endurance Championship title.
With a 15 minutes advantage the pair could have sat behind their competitors for an easier ride, but with the adrenalin flowing throughout the gruelling three hour race they extended their margin over the competition to win by 25:39s from Couhet and Bourreau, with Cadei and Ciani third.

Couhet and Bourreau don't head back home to France defeated, as the pair were crowned class champions in GP2 division while GP3 division also saw victory for another French pilot. Offshore World Champion, Thomas Favolini riding his Yamaha taking that title.
In Ski group there was even more Portuguese success with Vicente Cano and Sebastian Fragoso taking victory, second placed Matteo Valente and Diogo Barbosa with Vasco Brito and Miguel Pita third.
The Portuguese national anthem played in to the night on the plaza in front of Clube Naval de Portimao ending a successful event for the organisers and stakeholders. Some of the pilots are now off to Dubai to challenge in World Championship series deciding events, while the rest of us go back to our peaceful time at the beach.