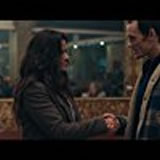 If there is a city to whose seductions it is impossible to resist, then that city must be Porto. With Gabe Klinger`s eponymous film, the city now has its screen version of a love affair.

In ´Porto´ two young foreigners, Jake and Mati, cross paths for an intense one-night stand, before continuing along their separate ways. Jake, a 26-year old loner – and we are sometimes inclined to feel looser too - catches a first glimpse of Mati in the train and from then on, she`s under his skin.

Fortunately for Jake, he bumps into Mati again in the magnificently lugubrious modernist Café Cuento. Fixing him with her confident gaze, a slight smile on her lips, Mati draws Jake across the café floor towards her, like a magnet.

The film is divided into three chapters. First, we have Jake`s point of view, then Mati`s and finally a joint perspective which attempts to focus the two. Gabe Klinger`s beautiful film is somewhat short on dialogue - in fact the two lovers don`t seem to have a lot to say to each other - and even shorter on explanation. We are for instance given little background on where these two characters come from and few clues as to where they might be heading.

`Porto` is about the moment and the intensity of a fleeting encounter. This film will resonate with anyone who has briefly met and loved another person in a magical city. The two characters experience extreme passion, but the reality is that they hardly know each other.

Mati, a 32-year old academic who confides in Jake that she has had mental health problems in the past, comes with a not yet concluded relationship with her Portuguese professor, with whom she has apparently had a child. Jake comes with his dog and a love of literature. Mati is played by the French actress Lucie Lucas who brings an engaging sensuality to the role. Jake is interpreted by the regretted Anton Yelchin, whom we see here in one of his final roles.

The camera caresses a granite block, lingering on a wooden door, to capture the city`s textures. Like the city itself, `Porto` has vats of style, but no intention of revealing everything to a fleeting acquaintance.