Trump and Obama cross the pond, separately of course

As the Trump juggernaut of incivility and shallow crassness rumbles through the world`s capitals, humour remains an instrument of peaceful protest which all democratic-minded people should indulge without restraint.

In recent days, Europe has seen visits from two American presidents. As everyone knows, after months of build-up, hurricane Donald finally hit the UK last Friday, down-graded from a state visit to a slightly more palatable working visit. The previous Friday, Donald Trump`s predecessor, Barack Obama, made a more discrete visit to the city of Porto, in Portugal.

The British, never averse to a little rough weather, turned out in force to greet Trump. A crowd of protestors ringed the US ambassador`s residence in Regent`s Park, banging pots and pans through the night while the President and Mrs Trump attempted to get some rest after his transatlantic flight.

Before arriving in the UK, Trump gave an interview to the suitably low-brow tabloid newspaper, The Sun, owned by his crony Rupert Murdoch, who also owns Fox News. In the interview Trump blasted the country he was about to visit and also his host, Prime Minister Theresa May, demonstrating his customary Olympic levels of tactlessness and primary school diplomatic skills. Questioning May`s competence, he suggested the former Foreign Secretary, Boris Johnson, would make a good Prime Minister.

It may not have occurred to the President that not everyone would be likely to go along with this recommendation, possibly preferring to get Brexit sorted in the least damaging manner to the premiership of a stand-up comic. Never inclined to refrain from a little destabilizing, the US President went on to criticize May`s plan for Brexit, claiming it might derail a US-UK trade deal.

Then it was the turn of London`s Mayor, Sadiq Khan, to receive a face load of presidential rant. Trump has on several occasions blamed Khan for London`s 2017 terrorist attacks, an accusation that many have suggested might have something to do with Khan being a Moslem with Pakistani origins.

Over this vociferous throng, a six-meter high orange “Baby Trump” blimp bobbed ludicrously up and down. In one of its tiny orange hands, the nappy-wrapped baby Trump clutched a mobile phone, throwing a tantrum as it gazed down at the thousands of protesting citizens. Never reluctant to lambast ally or foe, Trump`s own sensitivity does not extend beyond his narcissism and deep sense of insecurity. Ridicule on this scale must surely have hit home. The Mayor of London had given his authorization for the blimp to fly, and now a crowd funding campaign is underway for a similar blimp to tour the United States. 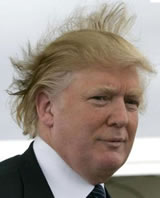 The British Prime Minister received Trump for talks at her official country residence, Chequers. After their discussions, the two leaders gave a press conference in the garden in an atmosphere of hilarity, with journalists giggling openly at the President`s more inflated boasts and a chorus of English cows mooing in the background. Back peddling, possibly a little late in the day, on his earlier aggression, the President gushed eloquently that the US-UK relationship was the “highest level of special.”

Then it was on to Windsor Castle for tea with the Queen. This was rather an unfair match, pitting experience against naivety as it were. After all the Queen is an old hand who has met more than a dozen American presidents. Never unphased by a little vulgarity, the monarch beamed up at the latest “leader of the free world”.

We can only imagine what Her Majesty was thinking as First Lady Melania`s generous lips clamped down on one of those cucumber sandwiches. Unlike the American head of state, the Queen doesn`t tweet… preferring a more discrete form of communication – observers noted that she was wearing a broach which had been given to her by the Obamas.

On Monday, although to the relief of all Trump had at last left the United Kingdom and moved on to Helsinki for his unfortunate summit with Vladimir Putin, the fun still wasn`t over. Song satirist Randy Rainbow spoofed Trump`s UK visit, reworking the lyrics of “I Am The Very Model of a Modern Major-General” from Gilbert and Sullivan`s “The Pirates of Penzance” comic opera to become “I am a very stable genius…

Now back to Barack Obama, so to speak. Obama, as has been abundantly commented, differs in many ways to his successor. You might almost be inclined to wave a sign with “Obama wears well-tailored suits”. All things being equal, as the economists say, might tailoring be a metaphor for other forms of elegance?

As I said earlier, a week before all this diplomatic chaos, Obama was in Porto for a few hours as the keynote speaker at the Climate Change Leadership Porto Summit. Porto is the gateway to Portugal`s most important wine region, the spectacularly beautiful Douro Valley. And wine production, like all forms of agriculture, is increasingly vulnerable to climate change. The aim of the summit was to encourage the wine industry to adopt a leadership role in combatting climate change through the industry`s best practices.

In a scarcely veiled allusion to the present US administration, Obama commented that despite changes in legislation, businesses in many countries were leading the way with climate change initiatives. He encouraged the wine industry to play a proactive role in this movement, in its own interest and that of the planet.

The conference closed with the signing of the Porto Protocol, a commitment to promote climate change. A follow-up conference will be held in Porto, in March 2019.

I raise my glass, of port of course, to you Mr Bridge, and again to you Mr President Obama!

The author, James Mayor, is the founder of Grape Discoveries, a wine and culture boutique travel company.