Fascinating Facts About the Algarve

Here in the south of Portugal, we're one of the best destinations in all of Europe for unforgettable vacations. The Algarve is proud to hold a reputation for being the land of delicious cuisine, fascinating landscapes and villages, dream beaches, and year-round sunshine.

Thousands of holidaymakers head in our direction every year, particularly those from the UK as we're only 2.5 hours' travel away. While everyone soon discovers just how great a destination the Algarve is, not everyone is aware of its quirky history.

In this article, we'll take a look at six fascinating facts about the Algarve that even our neighbours across Portugal might not be aware of.

The Algarve is known for being a foodie's paradise. Not only will you find fresh seafood and produce in abundance, but some of Europe's most renowned chefs have based their kitchens here.

Currently, the Algarve is home to no less than 8 Michelin Star restaurants. In 2022, A Ver Tavira and Al Sud were the latest restaurants to be awarded a star during the Michelin Gala. Not only that, but the Ocean and Vila Joya restaurants were each awarded a second star this year.

Although he's sadly no longer with us after going missing some years ago, Portugal's most famous cat was once a resident of the Algarve. Mr No Ears once commanded over 20,000 followers on his social media profiles, who were captivated by the one-eyed, no-eared feline's adventures on the streets of Albufeira.

While Mr No Ears has seemingly departed Planet Earth, his legacy lives on in both a cat sanctuary and a book. The Mr No Ears Cat Heaven was opened in his name with support by the Associação abrigo para Gatos Sr Sem Orelhas non-profit, while the book, Saudades Mr No Ears, has reached hundreds of cat lovers across Portugal.

And it's clear that Mr No Ears is still very much loved in the Algarve community if the support on the Saudades Mr No Ears Facebook page is anything to go by.

3. Our History with Brazil

It's well known that Portugal has hugely impacted Brazilian culture, with everything from language, cuisine and even architectural styles being shared by the two countries. Did you know, however, that Algarve was once part of a united kingdom with Brazil and Portugal?

The United Kingdom of Portugal, Brazil and the Algarves was formed during the Napoleonic invasions of Portgual when the royal court was transferred to Brazil. As the State of Brazil was elevated to the Kingdom of Brazil with the arrival of the Portuguese court, a pluricontinental monarchy was then formed between the two countries in 1815.

It existed until 1822, when Brazil formally proclaimed its independence from Portugal and was finally dissolved three years later with the recognition of the Empire of Brazil in 1925.

4. One of the Least-Densely Populated European Regions

As popular as the Algarve is with the holidaymakers who visit us every year, the region is surprisingly sparse when it comes to the local population. In fact, the Algarve is one of the least densely populated areas in Europe, with approximately 76 residents per square kilometre. Compared to the UK, which has around 267 residents per square kilometre, you can see why it is such a favoured destination among British tourists! 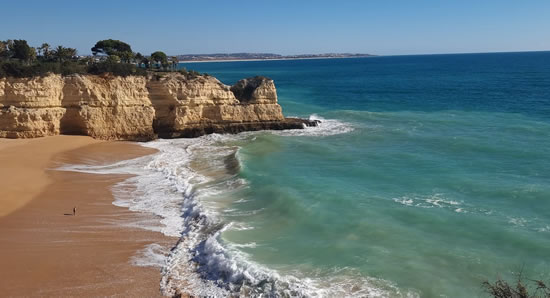 5. A Region of Natural Thermal Springs

Our region is known for being one of great natural beauty, from the purity of our coastline to our more rugged inland forests and natural parks. What's less known among visitors is that the Algarve is a region with several natural thermal springs.

Fontes Naturais, as they're known locally, are dotted about across the Algarve and are the source of heated waters famous among locals for their healing powers. You'll find several public bathing areas that are fed by the springs from east to west of the region.

6. The Portuguese Region with the Most Blue Flag Beaches

And finally, the Algarve may be famous for its sparkling beaches, but did you know that it's the region with the most Blue Flag beaches in all of Portugal? For years, the Algarve has maintained a consistently high reputation for the cleanliness, accessibility, safety, and eco-consciousness of its beaches. In 2022 a total of 86 beaches and four marinas were awarded the Blue Flag accolade.