This world is full of amazing creatures that you probably don't even know about. With so many different ecosystems and climates, animals have evolved to survive in many different locations, with a plethora of design features that are shocking to learn about.

So many animals exist in this world that we may know nothing about, so taking the time to learn about them and respect their amazing abilities is a way we can honor the beauty and rarities that nature has given us. From the beautiful to the weird, to the downright ugly, here are six of the world's most unique animals that you need to know about.

Going from the ugliest to one of the most beautiful animals in the world, we have the mantis shrimp. This tiny creature packs a ferocious punch and has one of the most powerful strikes in nature. This tiny body can unload a deadly strike, a hunting mechanism it has developed to hunt hard-bodied prey, such as crabs. This lethal punch can break the glass of a standard aquarium, so to keep a mantis shrimp, one needs a special glass to contain it. The mantis shrimp comes in various beautiful colors and is about as beautiful a sight as you can imagine. Its prismatic coloring is amazing to see, with many different colors being present and morphing into one another, it is like a living kaleidoscope of colors. Its rainbow body will leave you amazed and mystified, and packs about as big a punch as its striking abilities. The mantis shrimp is by far one of the most beautiful and powerful animals in this world, and it deserves all the respect of being named one of the most unique animals on earth.

The blobfish is one of the most unique animals in the world due to its physical structure and amazing ability to dwell in the deepest reaches of the ocean. Unfortunately, its ability to survive such pressure has also evolved it into one of the ugliest animals in the world, with no bone structure and a flaccid body. The blobfish is not a common animal to see, and it is even harder to reach and view in its natural habitat. When the blobfish is brought to the surface, it quickly suffers tissue damage from the decompression, leaving it looking nothing like its true form, but rather an unsightly blob of gelatinous muck; hence the name blobfish. While this animal has earned the title of one of the ugliest animals on earth, it's in normal form deep in the ocean, it looks nothing like its goopy countenance once it has been caught and brought to the surface. The blobfish is one of the most unique animals on earth and has gotten the raw end of the stick due to being pictured mainly in its decompressed and gelatinous form.

While you probably won't encounter a blobfish in your lifetime, you are sure to see them featured in memes due to their rather ugly countenance. This is an animal that should be left alone at its depths to flourish and be respected for its ability to live in such harsh and extreme environments. While it may be ugly, it is strong and one of the most unique animals in the world.

If you have a fear of creepy crawlies, and fear of moths, then the velvet ant is going to be one of your least favorite animals. These insects are a family of flightless wasps, with a large body covered in a dense mat of hair. With beautiful bright colors, they may seem fascinating to look at, but can also send a chill down your spine. Ants and wasps are some of the least favorite animals in the world, and these insects are no different. With an incredibly powerful and painful sting, these are certain animals you should admire from afar, to avoid any potential pain. While they may look cute and colorful, those colors serve as a warning to leave them be or feel a world of pain. These are not cuddly furry creatures, no matter how cute they may look. These ants don't live in colonies but are rather loaners, so don't worry that you may have them taking over your backyard anytime soon. And while their bite may be painful, it won't last long and has no permanent effects. One of the most amazing creatures on earth, but that should be admired from afar.

A good rule of thumb when admiring nature is that the most colorful animals are often the most dangerous. Those colors often give out a warning saying “stay away, I can hurt you” so if you see one of these ants making their way down your path, give them a wide birth and allow them to go about their business in peace. While the colors may seem alluring, it is best to leave them alone and avoid the pain that will come from trying to handle them. 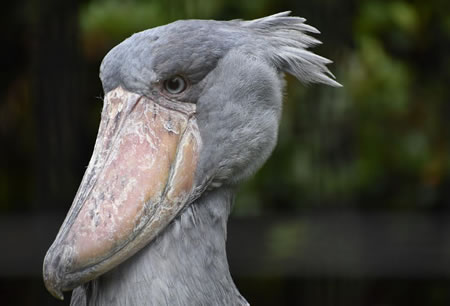 The shoebill stork won't be winning any beauty pageants, but it may win some fighting championships! This bird has an incredibly strong beak, leaving its bite with the ability to decapitate its prey. While these birds are rather docile around humans, you wouldn't want to approach them, no matter how interesting it may look. This stork-like bird can grow incredibly tall, and its scientific name Balaeniceps rex has many people liken it to a living dinosaur. This bird is incredibly built and is a bird watcher's dream when visiting tropical Africa. All in all the shoebill is an incredibly unique animal, one to be watched and respected due to its majesty and power.

This bird may look like it belongs in Jurassic Park, but it can be found throughout Africa by those who are keen to see it. This is a solitary bird, and you will not find it living in colonies, but rather sticking to its own nest and keeping its own company. This bird with the shoe for a beak is certainly one of the most unique creatures on the face of the planet, and if you find yourself encountering one, you should consider yourself incredibly lucky.

The blue glaucus is a small sea slug that is known for its amazing coloring and beautiful slowing appendages. While this small sea slug is beautiful, trying to handle it can result in a very painful sting, often compared to that of a Portuguese man o’ war, so it is definitely on the “look but don't touch” list of animals in the world. This slug has a variety of blue tones, with silver and black accents that make it look like a fringed and frilly fish, but is a slug. When in the water, the finger-like cerata allow it to move effortlessly, and it spends its day generally floating on the surface of the water. This slug eats venomous prey, steals their toxins, and uses them as a defensive mechanism. All in all, this teeny slug is beautiful to behold and should be treated with caution and respect, to avoid a painful sting. 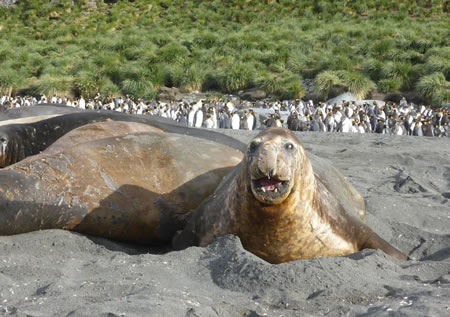 The elephant seal can be described as one of the largest and ugliest of all the seal families. It gets its name from the trunk-like nose that it flaunts on its massive head. These seals can grow incredibly large, weighing up to 5,000 kilograms! A far cry from the seals you see in aquariums, they were hunted almost to extinction and are a protected species whose numbers are in recovery. The male Elephant seal is an aggressive seal that can be up to 10 times as large as the female, leaving them dwarfed in comparison. These seals don't have many predators due to their enormous size, with the great white shark being their main predator. Elephant seals are one of the largest seals out there, so if you happen to see one in its natural habitat, it is best to stay far away, they may be awkward on land, but they can still move, and most assuredly outweigh you.

These seals are unique, and while they are not the most beautiful animal out there, their different nose and immense body weight have them at the top of the list for the most unique animals in the world.

While there are many beautiful and fascinating animals in the world, those on this list deserve recognition, from their amazing abilities to their appearance, each one is incredibly unique. All animals in this world deserve our respect and should be treated with the utmost reverence and respect. These animals are certainly beautiful, and the adaptations they have made to survive the harshest climates and environments are traits to be admired. From the most beautiful mantis shrimp to the ugly blobfish, these animals are truly some of the most unique in the world, and learning about them can help us to protect their species, their food sources, and their environments.