During a recent visit to the Algarve, members of the Swiss Mobile Veterinary Clinic (SMVC), a charity organisation, saved two badly suffering horses, provided a range of treatments for many others and gave much advice to a number of horse owners and volunteer carers.

Having worked entirely free of charge in daily 16-hour stretches, the founder and president of the SMVC, Christa Seiler-Stocker, and Swiss veterinarian Dr Nina Waldern, feel their latest week-long visit was so worthwhile that they hope to return before this year is out.

Christa Seiler-Stocker, a Swiss American, built and ran the Country Riding Center in Silves for six years from 2000, but now lives permanently in Switzerland where she founded the SMVC in October last year.

In line with her endless dedication to the welfare of horses, her latest visit was prompted mainly by on-going concerns about the maltreatment of horses in Lagoa and the reported lack of action by the Algarve branch of the national food and veterinary directorate (DGAV) based in Faro.

The Swiss visitors discussed this during a lengthy meeting with Lagoa municipal councillor Anabela Simão. The councillor explained that for the time being Lagoa does not have an official veterinarian so the DGAV in Faro is the sole authority able to deal with the much-publicised problems involving the Lagoa horse owner António Felix.

The DGAV has been severely criticised and the focus of public protests, the most recent in Faro on October 23, for insisting that the treatment and condition of Felix’s horses is largely acceptable. With his matter still unresolved, Christa Seiler-Stocker assured Anabela Simão that free veterinary help from Switzerland would be available if needed in the future. 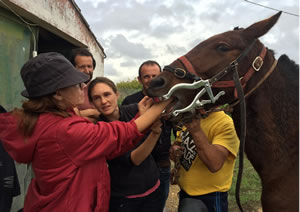 Horses in two gypsy camps were among those treated by the SMVC team. But while driving to Faro airport at the end of their visit, they were shocked to see an exhausted mare on the EN125 trying to pull a cart fully laden with wood and a heavy-set woman sitting on top.

They had treated this horse three days earlier and had told the owner it was in such poor condition it needed rest. They had also explained how to make a good-fitting protection for the horse’s yolk, which had been digging into its back causing open flesh wounds.
“The mare was now so exhausted she was unable to continue struggling up the hill on the main road opposite the International School,” Seiler-Stocker told us.
“We were absolutely shocked! So we stopped the car, I jumped out and ran over and told them that we totally disapproved of how they just didn’t care about their working animals.”

The horses gypsies use to pull a cart are almost always undernourished, she told us. “The horses they have attached to the back of their carts, which are for sale, are always in excellent shape because they feed them and want good money for them.”

The main road incident ended with the SMVC president buying the mare. She did this after drawing up and signing a contract with the owner. She then placed the mare in the care of a trusted friend and SMVC supporter before rushing off to catch her flight back to Switzerland.