Clive Jackson - The sky's the limit

Ex merchant marine engineer Clive Jackson has spent the last 15 years in the Algarve dedicated to his passion for astronomy. He and his wife Glória came to live in Portugal just over 15 years ago when Clive established the Astronomical Observatory of Tavira, of which he was Director and astronomer. In 2005, Clive also set up and is the manager of the Camera Obscura in Tavira.  The Observatory sadly closed in 2010 and the model planets from the Observatory may now be seen at the Camera Obscura. 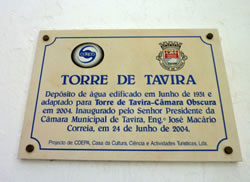 Despite the closure of the Observatory, Clive still has a number of telescopes and other equipment, and is enthusiastically ready to continue to share his vast 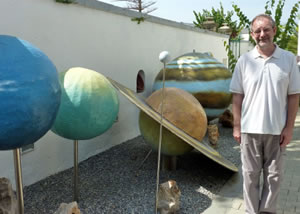 knowledge with audiences of all ages. When asked why the Observatory closed, Clive quipped, I got tired of working nights. He added that the economic situation was one of the principal causes for the closure and another was the dramatic increase of light pollution in the Algarve.

Astronomy and general science have always held fascination for Clive and after a working-life which included engineering in the Merchant Navy; work on oil rigs and motorway bridge construction; and driving over 1 million miles as a subcontractor in England, he and Glória decided to set up house in Portugal. Luckily, Glória Jackson shares Clive´s passion for astronomy.  Her interest was roused by TV series' such as Lost in Space, which she saw in her native Brazil where she qualified with a degree in economics. As her family originally came from near Porto, it was not  difficult for them to decide to settle in Portugal.

Because Clive specialises in education and public outreach, many of the children in the Algarve know him through his presentations. Clive was able to take advantage of Glória´s position as president of the Parent & Teachers Association in Tavira to make the necessary contacts with school headteachers. He has introduced astronomy in general and the Algarve night sky in particular to the students of hundreds of regional schools at all levels. He strongly believes that for students to create and foster a lifelong interest in astronomy, it is crucial for them to start young.  He finds that students become interested in astronomy and science mainly through experiential means, e.g. by themselves building rocket launchers or by conducting experiments to simulate different gravities and to feel their effects.

As a teenage schoolboy, Clive was told by his French teacher that he was useless at languages, and yet he now speaks fluent Portuguese and has picked up quite a bit of Spanish, German and Dutch. His last question to me before he gave his first talk to the Algarve History Association was am I giving this talk in English or Portuguese? Language teachers do not know everything. 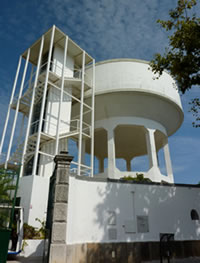 A major tourist attraction in Tavira is the Camera Obscura (from the Latin camera for a vaulted chamber and obscura for dark giving a darkened chamber). It is located in the water tower which was built in 1931 on Tavira´s highest point to provide water the for the City. Tavira has a number of natural springs between the river and the tower, and water was pumped from them to the top of the tower. The water was not of very good quality but it was free and supplied the City for over 60 years.

With the coming of the water supply from the dams near the Guadiana in the 1990s, the Câmara Municipal decided that the water tower was no longer needed and decided to demolish it.  Public opposition reached such a pitch that the Câmara held a referendum on whether to demolish the redundant water tower. The people of Tavira had grown accustomed to this special landmark and voted overwhelmingly that it should be retained.  Even so, it took Clive five years of struggle with bureaucracy before he succeeded in persuading the authorities that the water tower was an ideal location for a camera obscura, and that a camera obscura would be a wonderful tourist attraction.  The new Camera Obscura was opened officially on 24 June 2004, the 500th anniversary of the granting of the city´s charter by D Manuel I.  Group tours have accounted for well over 100,000 of the visitors to the Camera Obscura, and a further 30,000 individual visitors have made the trek to the top of the tower.

Originally, Clive hoped to employ additional staff to manage and run the Camera Obscura but the downturn in the economy has meant that it is the husband and wife team of Clive and Glória who manage this particular tourist attraction. Clive himself provides the commentary which is dryly amusing and he declares that every session is different. Some of his customers are amazed at Clive´s multilingualism; some people become scared by the height of the tower and have to be carried down; while others think that what they see is a product of black magic or something from the Middle Ages rather than something that is all done by mirrors. This Camera Obscura is a very special tourist attraction although it is still a semi-secret according to Clive because advertising is too expensive and it is difficult to get planning permission for street signs to be erected in the historic centre of Tavira. How many camera obscuras are there in the Iberian peninsula?  I know only of those at Cádiz, Lisbon and Tavira.  We are indeed lucky to have such an attraction on our doorstep; and we have it only because Clive and Glória Jackson determined to overcome all difficulties to establish it.

The most memorable moments in Clive´s scientific career include the Leonid meteor shower in 1999 when he saw well over 3000 meteors at the same time; and the transit of Venus in 2003. The event in which Clive has most pride is the 11th Summer Camp of the European Space Agency. Clive hosted the Camp in 2005 and he and Glória planned a 2 week programme for 150 children of all nationalities. They organised sessions hosted by speakers from all over Europe, devised science projects, set up astronomical observations, and organised sea trips and more than 800 coach journeys.  The work exercises devised by Clive and Glória have now become the standard format for these annual summer camps. This occasion was clearly a triumph not just for the Jacksons but it also represented a coup for Tavira and also for Portugal´s status within the scientific community.

Many people have been saddened at the closure of the Observatory and are concerned at the growing light pollution in an area where the skies are usually clear and where there is little other pollution. On the other hand, equally heartening is the enthusiasm of both Clive and Glória Jackson.  In spite of their recent difficulties and continuing commitments, Clive has volunteered to give four talks and host four observation sessions on behalf of the Algarve History Association.  He has also offered to lead a number of astro expeditions to other parts of Portugal and even further afield.  We are fortunate that Clive is located in Tavira and that he is still prepared to impart his immense knowledge of astronomy.