Chris Wright is so interested in sport and reporting sport that This Sporting Life was the obvious title for this piece.  Within the context of the Liga Zon Sagres (the Portuguese Premier Division) this title might create confusion with Sporting Clube de Portugal, Sporting Clube de Braga or even in the Algarve with Portimonense Sporting Clube.  But why let potential confusion spoil a witty headline?

I found this interview process very difficult because Chris is a born raconteur. It was so easy to laugh at his stories that I forgot that as the interviewer I should have been asking the questions and directing his narrative. Perhaps I might have guessed from his original response to my inquiry. I am more of a leg end than a legend, he said, because I am always putting my foot in it.

Our interview began in a similar vein.  I was born at an early age said Chris.  His parents were both keen on sport and knew many famous footballers, Joe Mercer and Stan Cullis to name only two.  His mum was a keen swimmer and Chris himself says he would be good at synchronised drowning, but of course, only once.  Luckily for us, he has so far refrained from taking up this particular sport.  Although born in Hampshire, he inherited from his cockney father a love for the East End and when he lived there, played football for Clapton Orient (which later became Leyton Orient).

Voluntary work with young people appealed to him and he worked for the Essex Association of Boys´ Clubs of which the Duke of Edinburgh was patron and the Duke of Westminster President.  So Chris spent his time either in the West End at Buckingham Palace or in the East End at Clapton Orient. No wonder Chris can find something to talk about with everyone he meets, but I have not yet heard him ask Have you come far?  At the age of 21, working at an Approved School in Norfolk, he was amazed to see the boys rushing to the front of the line of boys on the Sunday morning church parade.  Such apparent eagerness to attend church masked the real reason for their keenness - the boys at the front had the best chance of finding discarded cigarette ends.  These boys attended school in the morning and in the afternoon they could work on the farm, in the garden or at laying bricks and, of course, they all had the opportunity for sport.

Chris clearly enjoys the outdoor life and the opportunity to work with young people who needed to develop positive relationships. From Director of the Essex Boys´ Club, he became first Regional Officer for South East England and then Assistant Director at national level.  And then he began to drive a taxi from Stansted Airport.  After his first marriage broke up, he needed to spend time with his two sons, and driving the táxi allowed him to spend half the week with them in Brentwood and the other half in Colchester [why Colchester??].  During this time he met Chris who was to become his second wife.

One of the major benefits of táxi driving was the wide range of people that he met.  One day, táxi-ing  four people from Sweden, Chris remarked upon the good English of one of them.  She declared that her father was English and had been a guard at Buckingham Palace.  She produced a photograph of her father on guard at the Palace, and standing next to the guard was, coincidentally, the young Chris Wright.

For some years before Chris and his wife retired, they had visited the Algarve on holiday, and they gradually realised that Southern Portugal would provide a good place for their retirement home.  Algarvians are friendly and the climate is ideal.  They both researched the idea and decided that Castro Verde in the Alentejo would provide a suitable location, but two days in Castro Verde were enough because it was far too quiet for them.  After a hasty retreat to Vilamoura, they were advised to consider the Eastern Algarve, and they immediately fell in love with their plot of land just outside Tavira.

For Chris, writing and sport go together. During his last year at school, he qualified as a football referee and he was able to play football on a Saturday and then to referee football on the Sunday.  After his side (Fleet FC) had won a game by 3-2, he decided to report the game in a local newspaper (particularly to advertise the fact that he had scored a goal!).  He was offered a half guinea per week to report every Saturday and so began a career which led to PR and marketing with the London Evening News.  He was inspired to write when he saw the headline Queen in brawl at Palace (which in 1970 referred to Gerry Queen of Crystal Palace who was sent off during a home match with Blackpool).  I think he saw another opening his irrepressible sense of humour.

When they finally settled in the Algarve, one of the first things Chris did was to find out what sport he could watch.  He eventually found the SC Olhanense office (despite not speaking a word of Portuguese) and discovered that a season ticket cost only €10 and he could not miss such a bargain. The man ticket clerk could not believe that he and Chris would come from as far afield as Tavira to watch a game of football and everyone in the office came over to look at this amazing phenomenon.  After watching Olhanense´s 3-2 derby victory over Portimonense, Chris wrote up a report for Algarve Resident and his Algarve writing career was well launched. 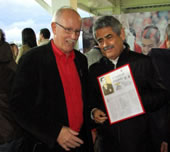 Chris continues to report on football and he is also interested in football legends in Portigal as well as any footballing and other links between the UK and Portugal.  In the February edition of East Magazine he writes about his discovery in 2005 of the grave of the 5 month old son of Lt Col Sir Edmund Keynton Williams in the chapel of  Santa Ana in Tavira, recently refurbished.  Between 1815 and 1820, Sir Edmund commanded the Portuguese Regimento de Infantaria Nº14 based in Tavira and was appointed Comendador da Ordem Militar da Torre e Espada do Valor Lealdade e Mérito, one of Portugal´s highest decorations.  Chris told me that after our interview he had an appointment in Huelva with a man who would show him the grave of the famous Man Who Never Was.  This British corpse (Major William Martin RM) was employed in an attempt in 1943 to deceive the Germans.  He carried faked papers which showed that the Allied invasion of Southern Europe would take place in Sardinia and Greece, and he was thrown into the sea near Huelva.  The intention was to persuade the Áxis to weaken their defences in Sicily, the real invasion zone, and it was successful.

Many Portuguese were quite baffled by the phenomenon of a group of expats becoming enthusiastic in their support of a football team from a Portuguese lower division. There are even some madcap Britons who fly from UK merely to watch a game.  British support was clearly beneficial, because SC Olhanense was promoted to the top division in the 2008/9 season.  Not for nothing do these supporters call themselves Os Gorillas.  Many newspapers and journals are equally curious about this expat enthusiasm, and they have printed articles about Chris and his group which now boasts over three hundred members.  The magazines TV Mais and J each has a four page spread and the supporters have starred in a short TV programme. The expats were asked to haul crates of beer onto the supporter´s coach for the benefit of the television cameras, and they felt completely stereotyped.  SC Olhanense is unique in Europe because it is the only football club in continental Europe whose programme is also written in English. 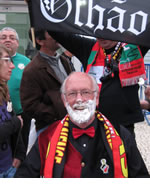 Expat supporters raise the profile of SC Olhanense in many ways; for example they raised funds for the junior sides (€2500) and €1200 collected from a sponsored shave was sent to flood stricken Madeira.  Chris possesses finely honed marketing and PR skills.  His schemes for raising money include the selling of SC Olhanense postcards, scarves, fridge magnets and mascots.  He is raising the profile of the club both here in the Algarve and in the UK by liaising with English clubs.  He plans to host events like the forthcoming visit on 1 and 2 June by legends of Tottenham Hotspur FC who will participate in a charity golf day and a charity football match and dinner. 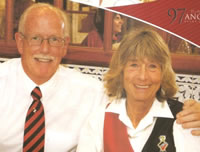 The sport of my home town was rugby league and I had never been to a football match until swept up by the enthusiasm of the supporters I made my spectating debut in the football stand at the José Arcanjo Stadium at SC Olhanense.  The goalless draw was not exactly thrilling but the atmosphere created by Portuguese and expats alike sharing a sporting experience was memorable.  The supporters´ social scene extends to celebrating just about everything.  Their diary is full of gala lunches and dinners where players, officials and supporters share a few common goals - having a good time, showing respect for the sport and promoting the Algarve´s only team in the Premier Division. President of the Republic Aníbal Cavaco Silva, himself an Algarvian from Boliqueime, plans to join the celebrations of the 100th anniversary of the Club on 27 April 2012.

These supporters are supporters in more ways than one.  Chris has created a ´family´ whose members look after each other during good times and bad.  The Chrises are at home to people from all walks of life and Chris´s sense of humour is always near the surface.  Besides his passion for football and his  eye for reporting an interesting story, Chris finds time to volunteer at Centre Algarve, where he helps to build a holiday centre for people with special needs.  Chris is one of those who see the potential for good in every person and every situation.

His parting story was of Stan Mortenson who remains the only footballer to score a hat trick in a Wembley FA cup final (for Blackpool against Bolton in 1953). Addressing an audience, Mortensen declared that he had known the man who had the record for the 100 yards at 4.3 seconds. The man had covered the distance as he fell down a mine shaft.

If you want to hear more about the Algarve´s football legends, Chris will be giving a talk on Monday 30 April at 6 pm in the Municipal Library Álvaro de Campos, Tavira as part of the Algarve History Association series on Portuguese culture and traditions.