Len Port and the Holy Grail

The quest for the Holy Grail - Len Port has a personal Holy Grail - it is his desire to write an outstanding novel that is likely to endure for a long time. It would be a novel with a profound theme, a simple plot, great clarity of language and lots of humour, so that it is easy and fun to read.

He has written other books, such as his most recent one on the religious phenomenon of Fátima, but for more than 30 years his personal Holy Grail has eluded him. 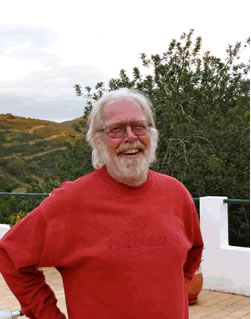 Len´s life has been fascinating.  He has been around the world and met all sorts of famous and infamous people - Richard Nixon, The Beatles, The Everly Brothers, Jayne Mansfield, Gina Lollabrigida…….  His memoirs would be easier to write perhaps than a novel and would make for an entertaining read, but  he asserted that his own life had been neither interesting nor important. Memoirs are for great world figures only, and it is presumptuous for lesser mortals to try.

The idea of  Living Legends is to celebrate the achievements of people who live in the Algarve and who contribute to its cultural life in the broadest sense. Len was flattered to be interviewed for the Living Legend series in Algarve Daily News, but he was quite adamant that while he is living, he certainly is not a legend in any sense of the word. One of Len´s most charming characteristics is self-effacement, and he modestly calls himself a hack from way back, and would be content to be referred to in this way. My view of him is different, because for the twelve years that I have been in the Algarve, Len´s name has always been prominent on articles and books published here.

Len was born into a Protestant family on the outskirts of Belfast. In that notoriously religious city, his spiritual life was focused on nature and in particular ornithology; to this day he does not know where this obsession with nature came from.  He successfully applied for a job at the Natural History Museum in London and began working in the fossil bird, amphibian and reptile section, mostly with dinosaur relics.  The first of Len´s pieces to be published was an article on a survey of the birds of Rathlin Island, off the north coast of Northern Ireland.  He then siezed the opportunity to participate in the first ornithological survey of the Crau, an area of the Camargue to the east and south of Arles. This survey presented the subject for the second of his published articles.

Three years of dinosaurs and archaeopteryx were offset by learning about drinking, girls, folk music and writing.  There had to be more than this, perhaps in the Antípodes?

Australia and New Zealand seemed far enough away from fossils and London, and he was torn between job offers in Perth and Wellington.  Windy Wellington? – no thank you.  He accepted the offer from the Museum of Western Australia in Perth, which paid his £10 assisted passage on SS Canberra.  A first job for the Museum involved a trip into the vast open spaces of the Outback, where he learned that while his fascination with the world of zoology continued, it did not offer him the opportunities for creativity that he sought.  He wanted the vast open spaces of the creative mind.  To write fiction, short stores, poetry and the book!

A friend, professor of zoology at Hong Kong University, reported from Hong Kong that genuine Levi jeans were available very cheaply.  Just the thing for a 20-something year old in the 1960s. He got on a boat to Hong Kong and once there applied for a job with the South China Morning Post where he landed his first staff job as a journalist.  At the same time he was freelancing for Radio Hong Kong.

"Anybody who was anybody came to Hong Kong and I was at the airport waiting to interview them!"

Len eventually moved fully into the broadcasting industry, becoming a producer and senior editor at the time of the Vietnam War and the Cultural Revolution in China.  Even if it was not possible for him to report directly from those places, this was an exciting time to be in radio.  Hong Kong was the nerve centre for reporting from the Far East, and he began to freelance for ABC (Australia), NZBC (New Zealand), the London Evening News and others.

He had a contract with Radio Hongkong and his laidback interviews with the huge number of celebrities arriving in Hong Kong came easily. He had a relaxed way of life in a rent-free apartment and, coming up to his 30th birthday,  Len thought he was getting too soft.  He wanted to be a serious reporter and it was the early 1970s, so why not go back and report on 'The Troubles' in Northern Ireland?

ABC News (America) offered him an opportunity as a freelancer to report on 'The Troubles.'  On his first working night back in 1972, he went to a Protestant barricade.  Unknown to the loyalist paramilitaries, he was interrogated and his tape recorder was destroyed.   It was great to be back home again.  He was frustrated and disilluioned that the Americans appeared not to want any real depth and analysis in their reports.  The disillusionment affected him because there was so much violence and so much hatred and for what - because people go to different churches?

He finally determined to leave Ireland after an incident at a friend´s house. His friend´s son thought he had seen a shadow moving in the garden and rushed out with a high-velocity rifle.  We are out of here said Len to his wife.

There are many asides in Len´s story, and there is always something unexpected and magical.  On their way from Hong Kong to Northern Ireland, he and his girlfriend stopped in the Himalayas at Darjeeling.  Their friend, the daughter of Sherpa Tenzing Norgay had organised for them a Tibetan Buddhist wedding at the home of Sherpa Tenzing, of Mount Everest fame.

After their life changing experiences in Northern Ireland, they enjoyed a postponed honeymoon in the Seychelles.  Here, Len was fortunate not to be appointed press secretary to the Chief Minister, James Mancham, because two years later Mancham was deposed in a military coup.

They left the islands by a Greek tramp steamer bound for Durban in South Africa. For once Len´s luck ran out because the steamer blew an engine and they were stuck in a tiny port at the northernmost tip of Madagascar.  At that time Madagascar was itself in political difficulty, and Len had no chance of exploring or reporting.

He enthuses on the other hand about South African game parks, the high standard of South African journalism and most of all about the real problems and major events which he could report on during the apartheid era.  South African representatives were banned from the rumble in the jungle, as it was called, but with his British passport Len was able to attend the historic world heavyweight contest between Muhammad Ali and George Foreman in Zaire on 30 October 1974.

As the political tension rose in South Africa, the Port household decided to return to Europe with their two children, first to Gibraltar where Len would work on his great novel.  They took a holiday to Portugal and found it so cheap and pleasantly undeveloped that they decided to move to the Algarve.  In Portugal, Len continued his journalistic work with local newspapers as well as writing freelance for British and international newspapers and journals, including my favourite magazine, Private Eye.

Soon after their move sadly Len´s marriage broke up and the great novel was still in gestation.  On the positive side, he met his present partner, Joan, who had lived in the Algarve since the 1960s.   They decided to produce guide books and spent many happy hours driving up and down the Algarve conducting research and taking photographs.  Joan´s knowledge of Portuguese and of the Algarve helped enormously.  (I note at this point that despite their encyclopaedic knowledge of the Algarve, our village of Morenos was still new to them.)

In the early 1990s Len and his business partner, Peter Daughtrey, created the publishing house of Vista Ibérica, which became the biggest English language publishing house in Portugal.  They published the legendary ´Bica, the Portuguese Water Dog´ and its sequel and many local and regional tourist guides including Algarve in your Pocket, Algarve on Wheels, Great Nights Out, Great Days Out and most successfully, Get to Know the Algarve which went to seven impressions.

After the guide books came a whole gamut of magazines aimed at English-speaking visitors to the Algarve and non-Portuguese residents living in the Algarve.  Len and Peter produced the iconic Algarve Goodlife magazine, as well as the Algarve Property Magazine, Algarve Golf Guide and Welcome for would-be home owners and tourists.  Alas, the credit crunch crushed Vista Ibérica. But nothing could crush the hack from way back.  The veteran journalist produced a book on the phenomenon of Fátima just in time for the visit of Pope Benedict to the shrine of Fátima in May 2010.

Len is by no means religious but being an investigative journalist he is fascinated by Fátima.  His book, published in Portuguese by a leading Lisbon company and still waiting an English publisher, is called O Fenómeno de Fátima - Graça Divina, Ilusão ou Fraude?  It examines the story of the Virgin Mary of the Rosary, Our Lady of Fátima, who is said to have appeared to the three shepherd children on six occasions in 1917. 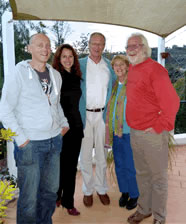 Given his previous wanderlust and need to push his boundaries I wondered at the fact that Len has lived in  Portugal for 30 years.  It was never my intention to stay he said.  Like many of us expatriates, he is charmed by the people, the scenery and the wildlife and he recognises that the Algarve offers a certain freedom of expression; there is little pressure for social conformity and people are accepted for who they and not for their job title or social status.

Commenting on the downside, he says  I share with many Portuguese the dislike for and distrust of  the current bureaucratic and legal systems and those who run them.  Political and elitist arrogance, coupled with ineptitude and gross inefficiency, has done so much to destroy opportunities, ruin companies and create dreadful personal distress, especially for young people.  Clearly Len is not one to pull his punches.

It is a cry from the heart.  Many expatriates like him genuinely want to contribute to society here, but official disinterest and obstructionism hamper social and cultural diversity and economic growth in the Algarve as a region.

Finally, I asked Len who are his heroes.  All four are noted great thinkers:  Bertrand Russell, Carl Sagan, Albert Einstein and Charles Darwin.  Through his life, Len has been a keen philosopher and uses his journalism as a vehicle to seek the answers to people´s spiritual or political beliefs.

There is no stopping the writer in him.  Addiction was the word that came to mind when Len said that he loved writing from morning to night, certainly five, wishfully six or even seven days a week.

I enjoy reading his blogs:  www.algarvenewswatch.blogspot.com and www.algarvenaturewatch.blogspot.com so much that I am waiting expectantly for his Holy Grail, Len´s defining work, his work of fiction with a profound theme, a simple plot, great clarity of language and lots of humour.  Don´t keep us waiting too long, Len.