Judy Pinto: Caring in the Community

Whether she is meeting ex President of Portugal Mário Soares or current President of Faro Câmara José Macário Correia, Judy never forgets her that two purposes in life are first the preservation of the Jewish heritage in the Algarve and second the care of the sick and needy.

Judy and Ralf Pinto had holidayed in the Algarve since 1985, and when in 1991 they arrived for a planned 6 month stay, she surprised Ralf by saying she would not be returning to their home in South Africa.  Although her son, then 26, accused her of abandoning him, Judy at the age of 51 had decided that she was going to make a new life here in the Algarve. Ralf left Judy in Portugal to start their ´new life´ and he returned to finish the ´old´one in South Africa. Judy is clearly a determined woman who does not shirk difficult decisions.

Judy and Ralf Pinto had holidayed in the Algarve since 1985, and when in 1991 they arrived for a planned 6 month stay, she surprised Ralf by saying she would not be returning to their home in South Africa.  Although her son, then 26, accused her of abandoning him, Judy at the age of 51 had decided that she was going to make a new life here in the Algarve. Ralf left Judy in Portugal to start their ´new life´ and he returned to finish the ´old´one in South Africa. Judy is clearly a determined woman who does not shirk difficult decisions. 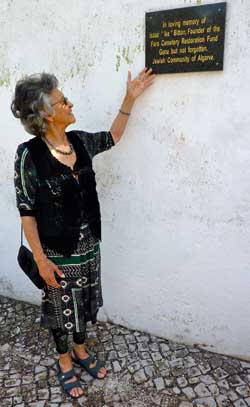 Born into a Jewish family in the tiny outback town of Alice in the Eastern Cape, Judy was sent to an Anglican boarding school in King Williamstown.  Her father spent £1,000 per annum on school fees so that she could learn to be a lady. King Williamstown was home to a large Jewish community and she was able to attend the synagogue and to learn Hebrew.  At school she felt different and left out especially on a Sunday when everyone else was at church and she was left alone with the cockroaches in the school dormitory.  Her next step was to study physiotherapy at Pretoria University but she was too young to cope with the challenges posed by her first placement in a hospital for the terminally ill.  Abandoning physiotherapy, she entered a secretarial college.

Judy´s parents had their origins in Lithuania.  Her father had left Europe during the pogroms in 1910 emigrating to the USA where he lived for several years before moving to South Africa and joining up with a Scottish regiment.  After the war he moved to the Eastern Cape where Judy recalls  that he always wore a kilt.  The family ran an ostrich farm at a time when European fashions created a huge demand for ostrich feathers.  The regulations in the Eastern Cape altered in 1962 and because it was no longer possible for whites to live there,  Judy moved to a Cape Town boarding house to be near her sister. It was in Cape Town that she met Ralf and because Ralf visited Judy at her lodgings on a daily basis, no other suitors stood a chance.  Ralf it seems is equally determined.

Judy felt safe in the Algarve and as people in Portugal made them feel very welcome she picked up the language quickly and in retrospect, her decision in 1991 not to return to South África appears easy.  She soon met an Israeli nurse married to a Portuguese and when visiting their new friend at Faro hospital she and Ralf looking out of a window saw the Jewish Cemetery, neglected and overgrown with weeds.  They obtained the keys to the cemetery through Samuel Levy at the Synagogue in Lisbon.   Not discouraged by the hornet´s nest in the key hole, Ralf and Judy were determined to discover the history of the cemetery and made up their minds on its restoration. 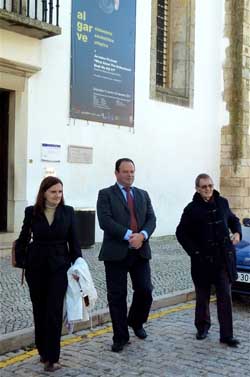 They discovered that Isaac (Ike) Bitton, a native of Lisbon then living in the USA had visited his mother´s grave in the Jewish cemetery in 1984.   He also had been dismayed at its state of disrepair and he vowed to restore it to its former glory as a sacred memorial to the Jewish Community of Faro. At home in Illinois, Bitton registered the Faro Cemetery Restoration Fund as a not for profit organisation and began to  raise funds.  When Ralf and Judy made contact with Bitton,  he found that he had volunteers in the Algarve willing to provide local oversight of its restoration.  Faro Câmara also offered its support to the restoration effort.

The eventual rededication ceremony took place on 16 May 1993 in the presence of Dr Mário Soares, President of Portugal and some 400 additional dignitaries.  The event was filmed and Isaac Bitton´s award winning DVD Without the Past is on sale at the Heritage Centre at Faro Jewish Cemetery.  The rededication of the cemetery and the later opening of the new Isaak Bitton Synagogue Museum in 2007 are milestones in the Jewish history of the Algarve.

The Sephardic community in Portugal had undergone forcible conversion at the hands of D Manuel I in 1497 and the subsequent investigations of The Portuguese Inquisition in the 16th and 17th centuries caused many Sephardic Jews to leave Portugal altogether.   After the suppression of the Portuguese Inquisition in the 1770s, the Marquês de Pombal decided to boost the economy and invited the descendants of those Sephardic families to return. In due course, sixty families returned to Portugal from North Africa and Gibraltar and Jews again began to take part in the economic  life of the nation.  The new Jewish community in Faro was relatively short-lived.  After attaining such a position of economic importance in Faro in the 19th century that their district was called Little Jerusalém, by the mid 20th century the community had died out as the young people moved to the universities and the cities, principally Lisbon. 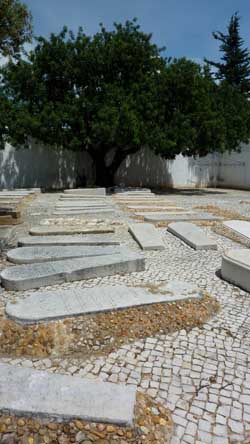 Just as important is Judy´s continuing contribution to the Jewish community of the Algarve and to the well-being of those in need.  When she gave her first small Hannukah party in 1992, little did Judy suspect back in 1992 that she was relighting of the flame of Judaism in the Algarve and that she was re-establishing the Jewish community.  A community is of course a living organism which requires regular sustenance and care if it is to remain healthy. Because there is no rabbi in the Algarve and no Jewish Community Centre, Judy and Ralf have not been afraid to undertake the enormous amount of work required to keep the flame of Judaism alive.  They visit the sick in hospital, take care of their immediate needs and concerns.  In her spare time Judy works at a soup kitchen and with the charity Madrugada.  It is their work behind the scenes as much as anything which povides the cement to hold their community together, what one of their friends calls a miracle.

Perhaps you might call Ralf and Judy´s small top floor flat in Portimão a Jewish community centre because over the years more than 600 different people have participated in Jewish celebrations in their flat.  They organise the Passover feast in the Clube Naval in Portimão but they hold Hannukah, Purim and Rosh Hashanah parties in their home. It is a small flat with a big welcome!  Regular guests from thirty-five Jewish families who live permanently in the Algarve are supplemented by the further twenty families who visit on a regular basis and people also to bring their friends.  The recent Passover celebration attracted over 80 people including visitors from the USA and Norway.

Judy was pleased to tell me that in 1995 they hosted the first Bar Mitzvah in the Algarve for 75 years and that their sons wedding was the first Algarvian Jewish wedding ceremony in Portimão for 500 years.! Permission still exists for interments in the Jewish cemetery in Faro but there have been no burials there since 1932.  The closest synagogues are in Lisbon, Belmonte, Porto and Gibraltar.

When Peter and I attended the recent Hannukah  celebration, friends at the party in conversation with the visiting rabbi discovered that they had a mutual interest in Cambodia.  Their nephew in Cambodia had been out of touch for six years.  The rabbi was able to say that on a recent visit to Cambodia he had actually met this nephew.  How had they managed to meet?  The rabbi suggested that there is a 50% chance that any stranger in a foreign country is Jewish, and that he had introduced himself to this nephew on that basis.  It is indeed a small world.

Indefatigable in the past, Ralf and Judy have been working voluntarily for 16 years and they are concerned as they get older (they are both now in their 70s ) that their work on the cemetery and among the most needy should continue into the future.  This work is not made easier by the scattered nature of Jewish settlement in the Algarve.  Who will pick up the torch of Algarvian Judaism?

How can I get in touch with Judy Pinto?