Whether you are a page turner or a kindle tapper, a dip-in-and-outer or a start-tofinisher, you’ll want to know what’s new, and what’s for you. Author Dawn Annandale, who runs the writers group in São Bras, and hosts a book club, will come up with a monthly selection, from classics of the future and acclaimed prize winners, to sci-fi sagas, romance, and thrillers. 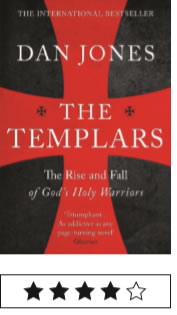 THE TEMPLARS By Dan Jones Publisher: Penguin Random House Genre: Historical
For the lovers of good old fashioned blood and guts, religious persecution and self-righteous baddies (and goodies for that matter), this historical narrative is descriptively rich, in-depth but not verbose, and generally fascinating. I had some vague ideas about the Templars but the detail of this historically-accurate account of their beginnings, the impact on the countries they were active within and the legacy of the movement is incredible. This book explores everyday life for the Templars, explains their financial power as well as religious and political achievements. The crusades were only a part of their background; the involvement of the Order of Templars spanned many thousands of miles and different countries and affected the lives of hundreds of thousands of people. Without doubt, a long and complicated read but, hugely worthwhile for all you history buffs. 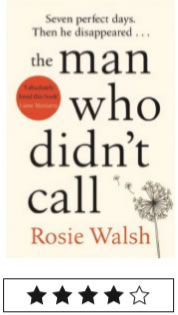 THE MAN WHO DIDN’T CALL By Rosie Walsh Publisher: Pan MacMillan Genre: Chick-lit
Imagine you meet a chap – the perfect man, love of your life, soulmate kind of man and you are choosing the dress on the third date kind of man. So, you meet a guy, have an amazing seven days of wonderful everything which is all so far so good. But, off he goes to the airport to take a holiday he booked ages ago, promises to call from said airport but the call never comes. Devastated is not the word - OMG. Can you imagine it? Well, that’s exactly what happened to our heroine. She is positive that something must have happened to him but of course all her friends tell her to forget him…. but she can’t. I can’t give anything more away – read the book! The story is one that will feel familiar in the way the friends communicate, give advice and generally chat. Rosie Walsh really has captured the atmosphere of our heroine who needs to discover the truth. 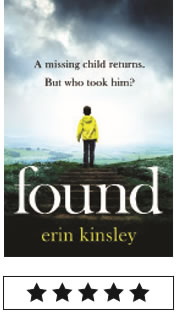 FOUND By Erin Kinsley Publisher: Headline Publishing Genre: Emotional thriller
A missing child returns but, who took him? Evan is 11 years old and disappears one night on his way home from school. The police and Evan’s family are at a loss and fear the worst may have happened... every parent’s nightmare. The way he is eventually recovered and returned to his family is heartbreaking - I read the book with tears streaming down my face. There is nothing graphic in the story, just a suggestion and intimation of the atrocities the child has suffered. The police work tirelessly to find the culprits and through a series of amazingly clever deduction works over several counties, Evan is reunited with his family but is damaged beyond words. His revelations regarding his captivity are horrendous but because of them, Evan’s ordeal is far from over. The boy’s family are intertwined emotionally with complex relationships which complicate the desperation of the situation. The feelings generated by the book will remain with you long after you have read the final page. 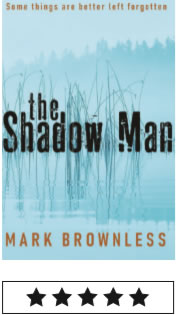 THE SHADOW MAN By Mark Brownless Publisher: Independently published Genre: Horror thriller
This one had me hiding under the duvet! Not for those with a weak heart – it’s horrifying and scary and terrifying! It all starts with a dream which triggers terrible memories for Phillipa (Flip) who recalls her group of childhood friends and their exploits. She had felt happy and content with her memories until the dreams began to taunt her, drawing fright and terror rather than the idyllic remembrances of her youth. Flip has lost contact with her old gang but receives a surprise email from one of the of girls she had once counted as her close friends which then triggers nightmares of fire and death. The novel flits between 1985 and the present day and relives snatches of Duran Duran and ra-ra skirts combined with an overwhelming feeling of the supernatural and fear. This book really does captivate from the first page until the very last. If you are feeling brave, give it a go! 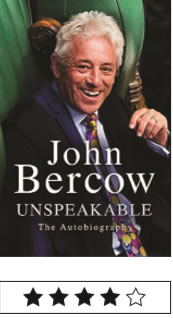 UNSPEAKABLE By John Bercow Publisher: Orian Publishing Genre: Biography
I was so impressed with this book and Bercow’s frankness. He says he always tried to do the right thing rather than make friends or enemies or to do the convenient thing. Bercow was the Speaker of the House of Commons for ten years and presided over the Commons whist dealing with issues such as the coalition, austerity and Brexit. He is famous for his caustic comments, his control of the Commons and championing those unheard backbench MPs frequently overlooked. Often controversial and accused of bullying on several occasions, Bercow’s story has been compared to David and Goliath, him against the establishment. He seems to be a marmite kind of chap – you either love him or hate him. Personally, I found the book riveting and I love him!

BOOK OF THE MONTH 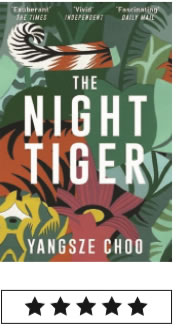 THE NIGHT TIGER By Yangsze Choo Publisher: Macmillan Genre: Fantasy
Set in 1930’s colonial Malaysia, this is the fascinating story of superstition and ancient belief interwoven with the very different behaviours of the white plantation owners and other assorted relics of the British empire. It is, in fact, a social commentary depicting the clashing of several cultures with confusing results. An apprentice dressmaker, decent and moralistic, takes a job in a dancehall in an attempt to pay off her mother’s debts. Her troubles are exacerbated by an incredible combination of a white doctor, a Chinese house boy, a severed finger and a tiger. The story resembles a maze; the twists and turns of fate take us on a journey of lives we really can’t begin to imagine during a time when the colour of your skin was a huge factor in determining the path of your life. Social standing seems to be the be all and end all for everyone involved in this tale of desperation and searching. Wonderfully rich - how marvellous and yet so sad it would be to go back in time and experience the period first hand.