On the opening day of BLiP Expo at the Portimão Arena, local mayor Isilda Gomes, visited the show and was delighted to visit the Bombeiros stand to witness the handover of the first mobile defibrillator of Operation Shock. See the BLiP video -  https://youtu.be/-dUUvVAWc64

Operation Shock is a collaboration between afpop, the exhibition organiser and largest association for expatriates in Portugal, and the Federation of the Fire Services of the Algarve.

The aim of Operation Shock is to provide this lifesaving defibrillator equipment for the region’s first response teams in each Bombeiros area, of which there are 17.

At the moment only the yellow INEM emergency vehicles are automatically equipped with defibrillators, meaning that if one of the red Bombeiros ambulances is despatched to an incident and the patient suffers cardiac arrest at the scene or during transport to the hospital, manual CPR is the only option for the attending nurse.

By equipping the red ambulances with this portable equipment, Bombeiros attending any scene can take immediate action to restart a heart and keep the patient alive until they reach medical assistance. The equipment being provided by the Operation Shock campaign also includes an ‘Infant Key’, which allows for the machine to also be used safely on children whose heart stop. 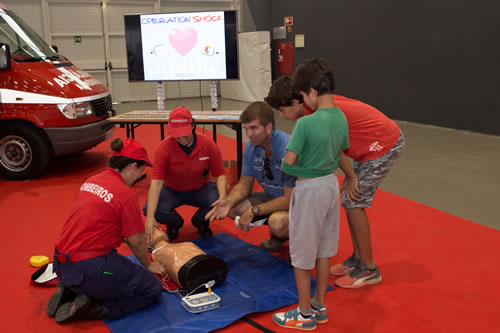 Isilda Gomes said that Operation Shock was a hugely valuable cooperation between the two organisations and wished them luck in raising the necessary €20,000 to ensure each Bombeiros area received the lifesaving equipment for installation in a Bombeiros red ambulance - often first on the scene at accidents and incidents.

Gomes is no stranger to the annual BLiP exhibition and this year said how important the show is to the Algarve business community as it allows a showcase for companies to promote themselves and the region. The mayor also was delighted that Portimão again was chosen as a venue for the show.

This year’s Expo saw visitor numbers at around 5,500 over the two days with a significant rise in the number of exhibitors with many companies new to the show adding to those who include the annual BLiP exhibition in their annual promotional budget.

The president of the Algarve Tourist Board, Desidério Silva, visited the exhibition hall on Sunday and was shown around by afpop’s chief executive, Michael Reeve.

Silva said what an important event BLiP is in the Algarve, helping to bring foreign and Portuguese businesses together while giving an opportunity for residents and visitors to see the range of services now on offer as the Algarve increases in importance as a holiday and residential destination.

One company new to the show was Servesul property in Silves whose manager, João Santos, said he was delighted with the number of visitors to his stand and hoped to see many of them in his estate agency in the new Plaza building in Silves.

Also new to the exhibition was Stars & Friends whose professional automotive detailing studio, specialised in paint correction, paint protection services and interior treatment, is based in Loulé but draws customers from across the region and from other regions. Partnership Relations manager, Rosário Marinho, said that she has had firm enquiries from car enthusiasts, one of whom was pleased to discover that having his vehicle’s tired paintwork professionally treated in Portugal was around a third of the costs of an equivalent service in the UK.

Regular BLiP exhibitors were pleased with the enduring appeal of the show as it gives an opportunity to talk to their existing customers and answer questions posed by potential clients.

Visitors expressed their satisfaction with the new exhibition stand layout which gave plenty of room to move around comfortably, relax in the spacious coffee area and have something to eat in the restaurant on the open first-floor level, overlooking the exhibition.

The ratio of Portuguese to foreign owned companies was well balanced with exhibition sponsor Henrique Pinheiro from Medal Insurance commenting that the increase in business confidence across the region was showing though, as promotional budgets, although still tight, were being used to good effect at BLiP where exhibitor costs have been kept as low as possible to encourage a wide range of companies to attend.

When Desidério Silva was shown the new defibrillator that had been presented to the Bombeiros and told about Operation Shock, he was delighted to dip into his wallet and donate to the campaign, adding his own congratulations to those of the Portimão Mayor.

Over the BLiP Exhibition weekend, €2,300 was donated to the Operation Shock campaign and anyone wishing to donate can contact the afpop office (see details below).

Richard Marques, Bombeiros Command at Portimão, said to donors, "Thank you and thank you again. This will save lives  - it's as simple as that" 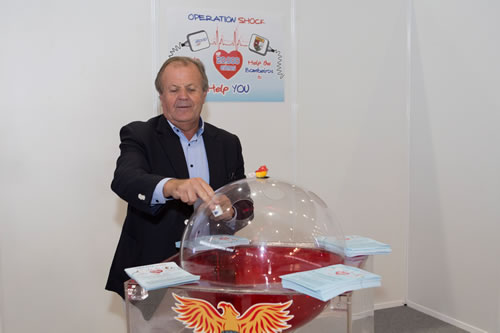 Desidério Silva helping the cause

+2 #4 Bruno Silva 2017-10-15 08:18
This is a very worthy cause and we should all thank AFPOP for its efforts but why is it necessary for an association comprised of foreigners to come to the aid of our underfunded Bombeiros, a far better long term plan for future investment in the Portimao area would be for Isilda Gomes the mayor of Portimao to insist that the management of the Autodromo race track repay some of the millions of euros it owes the local taxpayers, the money repaid could then be used for the benefit of the Bombeiros and also the many ordinary citizens in the Portimao area requiring help in one form or another, instead it is of funding politically well connected but incompetent business men who are being subsidised from this totally inept not to say corrupt use of local taxpayers money.
0 #3 mj1 2017-10-12 14:00
so in effect when the article says 5500....this is just an estimate?
+2 #2 Michael Reeve, afpop 2017-10-12 12:16
Quoting mj1:

its always puzzled me how AFPOPY know how many have attended, since no tickets are sold - how do they count who is in and who is out

It's a problem that we face every year for that very reason, it's free to enter and there are several ways for people to enter the grounds and two entrances into the arena. This is one of the reasons that we give bags out at the entrance, not only for people to carry any literature they may collect in the arena, but as a guide to how many people have been through the doors. We only give them out at the main entrance and not the rear entrance and we give one to a group that comes in. Given that we don't catch every group and we can't say whether there were two, three or four in the group, we look at the number of bags and make a best guess at how many actual visitors that relates to and then see if that is what we feel is right from having been in the auditorium all weekend.
Not an exact science I agree, but as the most important thing to us is whether exhibitors are doing business and seeing enough people on their stands, the actual number of visitors is only ever a guide and not a target.
-3 #1 mj1 2017-10-11 19:34
its always puzzled me how AFPOPY know how many have attended, since no tickets are sold - how do they count who is in and who is out
Refresh comments list