The west Algarve Section of the Royal British Legion Portugal raised €772 for the Poppy Appeal during a BBQ event on June 6th to commemorate the 75th anniversary of D-Day.

The theme of the evening, held at the Barroca Bar & Restaurant in Praia da Luz, was “A Time To Say Thank You” to a generation who helped shape our world as we know it today. 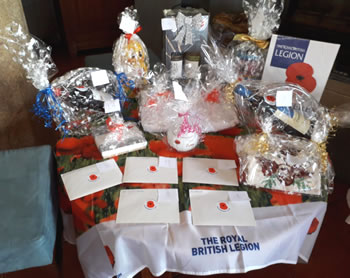 Just over 60 people were in attendance as RBLChairman Mrs Jacquie Collins paid tribute to the brave men and women from the combined forces who were involved in the D-Day landings in Normandy that were such a decisive turning point in the war and the liberation of mainland Europe.

This was followed by a minute’s silence, which ended with a toast to “The Brave”.

Sue Salisbury-Howe, RBL West Events Organiser, who arranged the event with husband James, told us: “After the toast the festivities then ensued with background music from the 1940s interspersed with a raffle, which resulted in 14 prizes being handed over to various lucky winners.

“We must say thank-you to Jacquie Collins and Patti Boling, who did an excellent job selling the tickets. Colin Hearn the RBL Eastern Algarve representative, who came to show his support for this event, joined me to draw the raffle tickets.

“Everyone went home with a smile on their face and, saying they had such a good time they wanted to be informed when the next western section event will be”.

Sue added: “Our grateful thanks go to Rosie and her team at the Barroca. They were exceptional in their help, in setting up on the day and also on the evening for their excellent food and service with a smile.

“Also thanks to Elaine in the Card Shop in Lagos, for her help with the balloon arrangements, and to Colin Packer, who provided the 1940’s background music at very short notice”.