The association of expats and local Portuguese stepped in to provide an area of respite and refreshment as the fire fighters of Aljezur and surrounding areas battled the huge wild fires that, for a time, appeared to threaten lives and homes in Vale da Telha, Vales, Espartal and other adjoining areas.

It was an action that the organisation Brits In Portugal described as, “a splendid demonstration of the kindness, compassion and support of the community in Aljezur for their magnificent Bombeiros who bravely tackled the serious forest fire that raged at the end of the week”.

As the fires took hold Amovate’s committee was contacted by the President of the Junta de Freguesia of Aljezur who asked if the Bomberios could use the Amovate HQ, known as the Old School House as a feeding station and respite area for the fire fighters from the length and breadth of Portugal as they battled the blazes for more than 12 hours. 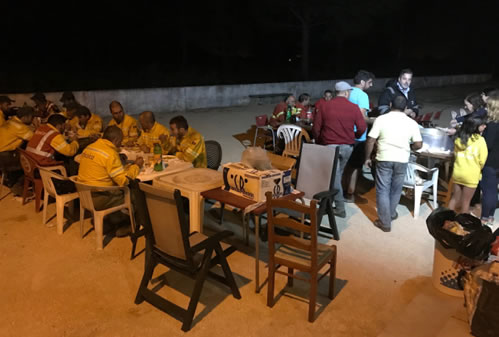 Amovate President Matt D’Arcy jnr told us: “Of course we—and the Petanca Clube de Vale da Telha who sublet the premises from Amovate—were more than happy to help the men and women who were risking their lives to help us”.

Amovate and petanca club president Antonio Ramos, who did such a magnificent job through the evening and well into Saturday morning, quickly leapt into action.

The rest area and feeding station was rapidly set up so the tired men and women of the bombeiros were able to “refuel”, snatching some rest and refreshment before resuming their heroic efforts which eventually resulted in the outbreak being brought under control without loss of life or property.

Amovate committee member Kjell Motet and partner Cath Baker ran the bar all night, with support from president D’Arcy and administrator Steve Scott, who informed the petanca club that Amovate would foot the bill for all drinks consumed by the fire fighters.

It was a real team effort, as the ladies who volunteer at Aljezur Bombeiros brought up from their HQ large vats of cooked food and fruit to serve to their colleagues at the tables set up by Amovate around the building’s car park and petanca court.

Aljezur Camara Vice President Antonio Carvalho was also in attendance throughout the day and evening, and Rui Miguel da Silva André the President of Monchique, an area which has suffered much from forest fires, also arrived to lend his support.

A spokesman for Amovate commented: “It was our absolute privilege to be asked, along with our friends in the Petanca Clube de Vale da Telha to play our part in assisting these wonderful men and women.

“We can only say well done once again to the brave and brilliant bombeiros of Aljezur and those colleagues from other areas who raced to their assistance.

“There were apparently 200 fire fighters, eight aircraft and 70 fire trucks involved, all of whom worked tirelessly for hour after hour in such difficult circumstances to avert what could have been a major tragedy through their bravery and hard work.

“We owe them our grateful thanks and respect”.