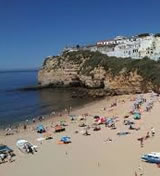 Are we already at that time of the year again?  I must be getting old(er) because it feels like 2016 has flown by and while the interweb keeps on telling me it has been the worst year ever, it feels actually like it has been a good one on the whole down here in Carvoeiro.

Sometimes it can be a pain living in a place that most people can’t point to on a map (Do you mean Puerto Rico?) but when the world appears to be going a bit mad it can be a nice feeling to be off the radar a little and that’s the way I like it here.

As usual, you still wouldn’t actually know that Christmas was on its way, except if you venture to a shopping centre, because nobody appears to have noticed yet that we are only however many shopping days left until Christmas.

If you like a low key festive season then this is the place to come – if you are expecting piped carols, fake snow and lots of lights…well Lagos have put up a few lights on the palm trees and there is a massive ball thing near the church you could look at.

There has been no word about fireworks returning to Carvoeiro for New Year but there are a few places that will be open for the night, however if you are looking for the big parties then Praia da Rocha or Albufeira are your best bet – there is also a party at the Centro Congresso do Arade in Parchal depending on what you are looking for.

CAR RENTAL  New lower prices!! Starting at just 43,50 euro per week in the low season  - no credit card needed at reservation - no "full tank charge" or other gimmicks - the price you see is the price you pay! from a local company at your service since 2003 - get a rental car delivered at your accommodation (in Carvoeiro or Alvor) at no extra charge (6+ day rental) at low on-line prices.

The Christmas fair will be returning again to the square in Carvoeiro with more stalls, live music and entertainment for all the family.  This year the market will be in the square on December 16, 17 and 18 from 10am until 7pm and it is always a lovely little event and a good opportunity to catch up with a few local faces while enjoying some mulled wine and picking up gifts made locally.

There will also be a Christmas fair held in the square outside the auditorium in Lagoa on December 8, 9, 10 and 11 – which will also include a living nativity scene, complete with animals which will be worth having a look at, if only to see the bored faces of the three wise men…

On Saturday, December 3, you can get into the spirit of the season by dressing up as Father Christmas himself during the 5th annual charity Santa parade in Armação de Pêra.  Choose between an 18km bike ride or a 3km walk (I know which one I would prefer) and meet up at the Holiday Inn Hotel at 10am to take part in the event.  It costs nothing to join in but orgnisers ask that everyone brings food items with them to be distributed to charities – non-perishable good only.

There are always lots of Christmas markets and fairs taking place across the Algarve at this time of the year and a new one to the calendar is the Vila Vita Christmas Market.  The market will be taking place at the Biergarten in Porches (located just off the roundabout in Porches on the EN125) and will be open from 1pm until 8pm on December 3 and 4, 10 and 11 and finally on December 17 and 18.  The location of this market is a great one and anyone who was able to join in the Octoberfest celebrations at the Biergarten earlier in the year will already know that they know how to put on a good event here so it looks like this Christmas market will be well worth venturing out for – even if it is just for some Glühwein!

The Christmas fair will also be returning to Ferragudo on December 3 and 4 as part of the ArteNata celebrations in the village.  Here the fair will open at 10am on the Saturday and there will be a chance to meet up with Father Christmas himself (it’s a busy weekend for the man in red it seems!), have a picture taken with the nativity scene, listen to local music, watch shows and of course buy lots of bits and pieces for Christmas.  The fair looks like finishing around 5pm before it beings to get too chilly so be sure to get down there early if you don’t want to miss anything and would like a parking space that is not in Portimão.

Food fans will be pleased to know that the Bon Bon Restaurant in Sesmarias has held on to its Michelin Star rating once again.  It is always pretty nice to know that we have such a highly rated restaurant locally and it is great to help raise the profile of the area.  But while we have one star in Sesmarias, there are two stars down the road in Porches at the Ocean Restaurant located in Vila Vita, where chef Hans Neuner has retained his rating and joins only four other restaurants in Portugal with two stars.

In total there are 16 one star Michelin restaurants in Portugal, with the most local others being Willie’s in Vilamoura and São Gabriel in Almancil, while down in Albufeira you can enjoy a two star meal at Vila Joya – if your budget stretches that far!

We may all moan about the seeming lack of investment by the local council in Carvoeiro in general but it appears that the Lagoa Câmara have actually been doing a pretty good job when it comes to watching the finances – although when we look at who this is being compared too it’s not exactly a great list.

It turns out that Lagoa has come top of the Portuguese medium sized municipalities for financial efficiency based on an analysis of various financial indicators including liquidity and debt levels.

The success of Lagoa in being able to hold off spending all the taxes and then borrowing a whole load more to do other projects has meant that there was even money to spare in the coffers, enabling them to dig up the centre of Lagoa in the name of modernisation (I think the jury is still firmly out on this one and if you plan to head into Lagoa anytime soon be prepared for general mayhem and confusion).

Our local football team Carvoeiro united continue to make great headway in the league and are slowly moving up the rankings – so congratulations to all involved for doing so well.  It’s a long season but the team are firmly on the right track and if you would like to support them, you will find posters with the dates and times of the next matches in many of the bars in Carvoeiro – alternatively, pop into Hemingways where they will be able to give you all the information you might need.

The local darts league in Carvoeiro is also well underway and you can find the teams playing every Friday night in the various bars around town – nip into Harrys bar to see the schedule and you never know, you may even be asked to join in if the numbers are low!

Also, don’t forget that the ladies in the town still play netball every Thursday night up at the Carvoeiro Clube de Ténis.  It doesn’t matter if you haven’t played for decades or even if you have no idea about what netball even is – everyone is more than welcome to join the sessions which take place from around 6.30pm each week.  Contact the Tennis club for details or speak to Carvoeiro Six bar to find out more.  The netball sessions are not only a great way to keep fit without spending a fortune (its €1 a session), they are also a great way to meet new people so head over there on a Thursday!

A massive congratulations to local resident Colin MacBean who completed an epic journey on foot along the coast of the Algarve with only his dog Roly for company.  He endured torrential rain, injuries and a couple of frosty welcomes but managed to raise a whopping €1,500 for the local bombeiros!

Well done to Colin and to everyone who helped him out on his journey, he is planning to do it all again (at what point do we question his sanity?) next year but would love it if other enthusiastic ramblers joined him on the way and helped him to raise even more money.  If you would like to donate or want to join Colin in his next walk then visit Harrys bar and they will point you in the right direction to find him and discuss plans!

Have a great month, someone mentioned it was Christmas soon so Feliz Natal and I will be back in 2017 to start a whole new year of Carvoeiro.com newsletters