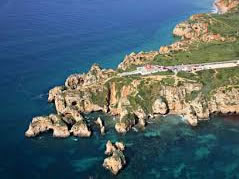 So called conservation work at a renowned Algarve beauty spot has locals who are concerned with the environment, including biologist Dina Savador, up in arms over what they describe as hugely damaging work to install concrete pathways across a nationally important headland at Ponte da Piedade.

The council has European funds to spend so is pressing ahead, despite the obvious damage being done and despite calls to halt the construction. Study is needed to see how best to protect the natural area from the serious erosion caused by all those who visit Ponta da Piedade and to arrive at the optimum solution for the comfort and safety of visitors.

Dina Salvador has sent a report with a series of photographs to Lagos council which remains convinced that its way is best and that the work, involving tonnes of gravel and concrete somehow is appropriate for this sensitive cliff-top area.

One of the problems associated with the Algarve’s boom in tourism is that visitor numbers are affecting the region's beauty spots like never before - the environmental impact is significant.

Environmentalists argue that work must stop immediately so that the project can be done properly. Cement paths are not the answer - raised walkways in wood or another material, would be.

The Algarve’s environmental agency has commissioned the current work, another of ‘demolition man’ Sebastião’s Teixeira’s many feats of spectacular vandalism, which involves pouring gravel onto a layer of geotextile blanket and covering it with cement. This is about as un-environmentally friendly as can be imagined and locals are at a loss to understand why this over-the-top, unsympathetic construction method has been selected for an area of outstanding natural beauty and importance.

Dina Salvador's presentation was accompanied by warnings from ‘respected Portuguese scientists’ and the report has been sent to those government bodies that are meant to be preserving the Algarve's natural environment, not covering it in a bizarre series of concrete pathways.

Dina Salvador writes: “The work of the ‘requalification of Ponta da Piedade,’ the responsibility of Lagos council, is underway and has been generating immense controversy.

“It is a place of rare beauty, of great geological, geomorphological, paleontological interest and of geoconservation and of fauna and flora. The requalification and preservation of this place is an important goal that really should have been started years ago.

“Now this important part of the natural beauty of Lagos and one of its biggest tourist attractions, is under serious threat. Every year, human traffic is increasing which is resulting in trampling and erosion of this delicate ecosystem.

"However the current work in progress, widening and extending the existing paths, covering them with a white geotextile blanket, tipping a layer of gravel on top of the blanket and then adding an 8cm layer of porous concrete, not only is an eyesore but is a serious and permanent threat to natural surroundings – in particular to soil, plant and animal health.

"The project has been highly criticised and opposed from everyone including the local public, opposition groups and political parties as well as Portugal’s most respected geologists, palaeontologists, botanists and geoconservationists.

"An alternative option has been put forward, a raised wooden platform which will not only keep visitors safely off the cliffs but allow for vegetative growth beneath the pathway, wheelchair access and minimal negative effects on the environment.

"As we have seen in previous years along the Algarve coastline, the cliff structures also are very fragile and susceptible to collapse, so any heavy works should be avoided to avert serious injury or death.

"Similar, successful wooden walkways already exist all along the Algarve, including a Council funded walkway in Lagos at Camilo beach.

"The big obstacle facing those opposed to the Ponte de Piedade is that this project has been given community funding and once the works are finished, any future projects (to rectify the damage) in the same area will not be given funding.

"As the project already is underway, there has to be a halt to the works while a re-evaluation of the project’s negative effects can be undertaken." 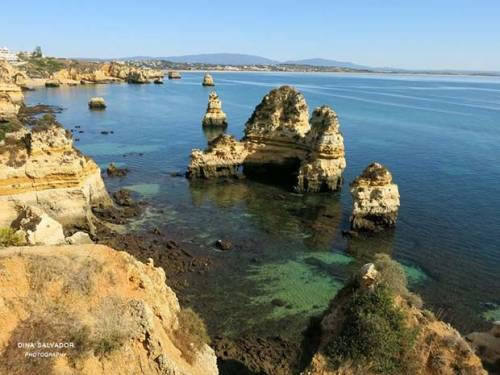 Just looking at the photo, it looks like a good option as it seems to blend into the surrounding environment and it will help to steer walkers to stay on the path to prevent further erosion.

That won't be the finished product. I assume concrete will be poured over it to make some of the area accessible to wheelchair/disabled users.
+1 #5 Ed 2017-10-05 09:00
Quoting Neil M:

Just looking at the photo, it looks like a good option as it seems to blend into the surrounding environment and it will help to steer walkers to stay on the path to prevent further erosion.

I assume they have yet to pour the concrete on top of the gravel. It will look different then. I will see if I can get a picture.
+1 #4 Neil M 2017-10-05 07:24
Just looking at the photo, it looks like a good option as it seems to blend into the surrounding environment and it will help to steer walkers to stay on the path to prevent further erosion.
+3 #3 Jack Reacher 2017-10-03 07:19
I wonder if any geotechnical studies were done. Concrete, heavy rain and soft cliff material is a recipe for cracking and broken pathways, an all too familiar site along the Algarve Coast. Just look at mess in the Praia Dona Ana carpark next to the acess steps. Trashing the environment for the benefit of tourists...ironic isn't it?
+4 #2 cuesta 2017-10-03 07:17
Whatever effort is made by the Camera to improve the area there is always some interfering busy body or group who do not like the result. The work stops until these groups get their way in the meantime the funds have been re-directed. If the edges of the textile blanket are concealed then the pathway blends in to the environment much better than a series of raised wooden platforms along the coastline
+3 #1 Grumpy Grandad 2017-10-03 07:17
Whist I agree that concrete and gravel might not look the best the raised wooden walk ways that have sprung up all over the place will soon be in a poor condition and require constant repairs at considerable extra expense,who is going to pay for that?
Refresh comments list