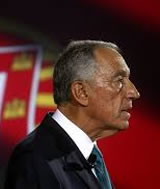 In a vigorous televised address to the nation, Portugal’s President has challenged Prime Minister Antonio Costa over this year’s second series of terrible fires, in which 41 people have died.

Insisting that ‘enough is enough’, Marcelo Rebelo de Sousa has demanded that immediate changes be made to Portugal’s chaotic forest and fire prevention policies and invited the Portuguese parliament to decide on the government’s future in a no-confidence motion.

The President’s strong call for action on Tuesday evening has been in marked contrast to the government’s political wriggling and unconvincing waffle about ‘medium-term reinforcement measures’.

Giving voice to widespread public feeling that the government should apologise for its failure to protect citizens, he thundered that the time has come to shake up the system.

The ever-smiling António Costa, who has gained much of the credit for putting Portugal back on an improved economic course, suddenly appears uncaring and insincere, while his political future looks uncertain.

Demanding that Portugal’s forest be declared a ‘national priority’, whatever budgetary constraints may exist, with a clarity and political drive uncustomary in Portugal, Rebelo de Sousa has pinned the Socialist Prime Minister to the wall. With a slim parliamentary majority of only nine MPs, there is a possibility that António Costa’s government could be toppled by a combination of left wing and socialist rebels.

A welcome result of the President’s intervention has been the departure of the Minister for Internal Affairs, Constança Urbano de Sousa, who immediately tendered her resignation after several days of doing her best to cling on to her job. There now seems to be sufficient traction to force the government to get its broom out of the cupboard and do some energetic sweeping. Among the principal candidates to go are a number of incompetent and inexperienced National Civilian Protection Authority commanders.

The President’s intervention follows up the delivery of two government-commissioned reports into the Pedrógão Grande fire in June, in which 64 people lost their lives.

These reports have pinpointed a series of structural problems in forest management and fire prevention and fighting. This depressingly long list includes forest clearance, the creation of fire breaks, faulty communications systems, dependence on private sector suppliers for fire-fighting support and insufficient penalties for arsonists.

Although many of the items on the list had in fact already been under interminable discussion for several years, Portugal managed to earn top place this year in the European Union for the number of lives and hectares destroyed by fire.

In a political system often characterised by prevarication and cronyism, the President’s strong leadership has been as refreshing as the desperately needed rain that this week has fallen in some parts of the country.

Floundering leaders such as Theresa May and Mariano Rajoy could do well to observe Rebelo de Sousa’s lesson in humanity and political astuteness. The President has seized the moment to give the muddling Portuguese system a decisive kick up the rear which it is hoped will save lives in the future and benefit the rural economy. 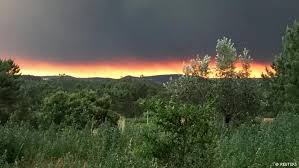 What exactly is the president's solution to the fires? Other than political grandstanding and angling to bring down a government he never wanted, it is nery unclaer that he has anything useful to offer. Replacing a "Socialist" (but actually neoliberal, albeit in coalition) government with a "Social Democrat" (more extremely neoliberal) won't help. Did he even mention climate change? Banning eucalyptus?

It is not the President's role to outline a solution, that is what the Council of Ministers is for. Mind you, he will have read the reports into the July fire and their suggestions.
+2 #2 MD 2017-10-20 05:50
Great article Ed. Spot-on!
+3 #1 dw 2017-10-19 22:35
What exactly is the president's solution to the fires? Other than political grandstanding and angling to bring down a government he never wanted, it is nery unclaer that he has anything useful to offer. Replacing a "Socialist" (but actually neoliberal, albeit in coalition) government with a "Social Democrat" (more extremely neoliberal) won't help. Did he even mention climate change? Banning eucalyptus?
Refresh comments list