Leading citizens of the Portuguese resort town of Lagos, last week petitioned their mMyor to save one of the region’s best known natural attractions, the cliffs of Ponta da Piedade in Algarve, from disastrous private development. This is the latest step in a broad, grassroots campaign initiated by local author Jonathan Silva. 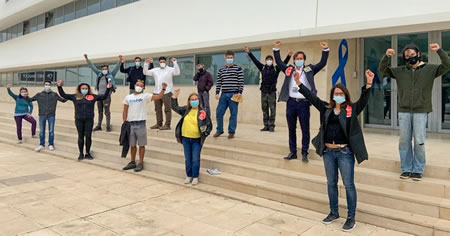 At 11am on April 8th, Silva delivered a letter to Lagos City Hall signed by over 500 citizens of the town. The signatories included lawyers, business executives, investors, teachers and university professors, dentists, psychologists, sociologists, architects, researchers, environmental engineers, agronomists, retired members of the City Council, as well as celebrities like singer Dino D’Santiago.

“An Algarve for all of us deserves the conservation of our natural wealth,” said D’Santiago, who is from the area.

A love for the land…

Jonathan Silva grew up in Lagos. Since he was a child, he has hiked the beautiful cliffs of Ponta Da Piedade, and has a strong personal connection to them.

After a few years working abroad, Silva returned to Lagos in 2020, in the middle of the pandemic. When he arrived, he was faced with a reality that outraged him. The area between the cliffs of D. Ana beach and Ponta da Piedade was fenced off up to the cliffs, illegally encroaching on public land. This would prevent residents and visitors from enjoying the surrounding area.

Silva also learned that the municipality had begun drafting plans to allow private interests to develop the area. One of these is a large construction company, which is advertising the land for sale with possible construction permits.

… that drove a grassroots campaign

The situation led Jonathan to assemble a group of local citizens to save the area. He started a campaign in October 2020 and established an NGO — Solemage — to push for the sustainable development of the land.

Jonathan was also an active member of the international progressive movement DiEM25. He applied to the movement for support, and DiEM25 agreed to lend its expertise to the campaign, advising him and providing him with resources.

“Everybody should have full access to these cliffs,” said Jonathan. “They’re world famous. It’s not fair that private interests should be able to control who can walk on them.”

From the outset, Jonathan’s campaign to save the cliffs of Ponta de Piedade had three simple demands:

An early success, with more work to do

Jonathan’s campaign is already a powerful example of what can happen when a simple citizen tries to correct an injustice by confronting powerful interests.

After only a few months of existence, the campaign scored an important victory. As a result of the campaign, the mayor of Lagos invited Jonathan to a meeting on March 31 to exchange views. At the meeting, the Mayor agreed to remove the fences. This would allow the public to hike the cliffs freely once again.

While this is excellent news for Lagos, the Mayor has not committed publicly to a timeframe to take the fences down. The Mayor has also refused to accept the campaign’s other two critical demands — to withdraw development plans and hold a public consultation.

Will the Mayor give citizens their say?

The citizens of Lagos and their supporters, through Silva’s campaign, hope that the Mayor will give them the chance to input on what happens to this beautiful land.

“The community should have the right to vote for different project proposals as to how the area could best be used or developed,” said Peter Bondesson, retired City Council member.

Peter Price, a retiree, is rightly concerned about the impact on tourism, vital for the local economy. He says: “Save this area of outstanding beauty for generations to come. Don’t ruin the very ‘magnet’ that attracts so many visitors each year to take pleasure in natural surroundings. Who wants to see a concrete jungle?”

IT manager Filipe Manuel da Silva Martins had some strong words for the developers seeking to build on the Ponta da Piedade: “It is unacceptable, it is criminal, to destroy natural heritage — because that is what will happen — to satisfy private appetites.”

Lisa Crispim asks the Mayor: “Please don’t destroy this wonderful and incredibly beautiful nature. Respect the environment, not the money”.

CLICK HERE o view  a short (one-minute) video from the campaign, showing the cliffs and what is at stake.

CLICK HERE to see an interview with Jonathan for DiEM TV, where he elaborates on his story and the campaign.

Further quotes from citizens who support the campaign:

“We have the right to know and the duty to inquire, as agents and guardians of the objectives of sustainable development (UNESCO), how the territory and its resources are being thought and designed.” —University Professor, Maria Manuela A. M. David

“The housing occupation of the first line of the coast can only lead to the mischaracterization and ruin of the heritage.” — Henrique Alberto Legatteaux Tabot, Retiree

“Excessive construction on and near cliffs / hillsides destroys nature and will kill tourism, with the chambers (its leaders) being responsible for unemployment and abandonment of the areas” — Isabel Fortes, Retiree

“Local power in all its horror! They learn nothing from the numerous urban disasters and landscape attacks that the Algarve has been a victim of! - Helena Franco Gomes, concerned citizen

“Spatial planning should be respected especially the coastal fringes, which are areas with many dynamics. RAN is the public water domain that exists to avoid major problems, such as human greed and the millions of euros of these toxic projects.” — Afonso d’alte matos venade rodrigues, Student

“I feel very strongly about preserving the beauty of this stunning area and developing it in a way that stimulates the economy whilst preserving its natural beauty. Why would we want to ruin our greatest gift - mother nature?”, Jacinta Powell, yoga teacher and video producer.

“The beauty of our town are the untouched areas around the sea and the high cliffs. Lagos is one of the kind because of the old town and the wild cliffs and us the residents need to protect the green areas and keep them wild and unexplored, or it will lose its charm.” — Eva Herder, Executive

“Please save Ponta Da Piedade from further development so the natural beauty of Lagos Can be preserved and remain accessible to the public, so future generations can enjoy it too.” — Liz Wikberg, marketing expert.

“Safe access to the cliffs by removing the fences, Withdrawal of any current development plans for the cliffs, or construction permits, A public consultation so the community can decide with the municipality what should happen with the area.

“The community must have the right to vote on different project proposals that must be presented to the public before the executive makes any decision.” — Ana Cristina da Silveira Serra Campos, Teacher

“The Future of our Planet depends on our options for the present. Let us be conscious and responsible citizens in the use of the resources that our planet offers us. Protect the coast of Lagos from massive and unrestrained constructions. Be the future example of good choices in the present. Say ‘yes’ to the protection of nature.” — Maria Raquel Sarmento Silva, Teacher

DiEM25 is a pan-European movement of democrats, united under the conviction that the European Union will only survive if it is radically transformed. The environmental, economic and coronavirus crisis have shown what real solutions for the majority and not the minority can only come about if we join forces across borders. This is the mission of DiEM25: through a coordinated effort, across Europe, to unite citizens and create enough energy to save the EU from itself. The EU will unite or disappear. We must act quickly, before it is too late: that is why we are the Democracy in Europe 2025 (DiEM25) movement.