A Taste For The Special

According to Justin O’Hanlon, one of the brightest lights among Portugal’s rising stars in winemaking is Tomás Emidio who returned home to his family’s Quinta Varzea da Padra five years ago to do things differently.

Such progressive leaps, such unlikely bounds and all the while the world sits idly by and fails to mark their passing. Perhaps, perchance, it simply hasn’t noticed. Not so for us, the lucky few, poised and patient, waiting, glass in hand, palate at the ready, nose forever tuned to the aromatic, flavoursome offerings of the next chapter in this life-long library of wine: Ours first to decant and discover.

Portugal offers so much to this explorative adventure. Dynamic, avant-garde production, creative young wine makers, non-conforming mavericks yet to be discovered. In my limited time here very few fit this bill in quite so snug a fashion as the focus
of this feature.

The past forms the present

Quinta Varzea da Pedra is a fourth-generation property situated in Bombarral on Lisbon’s north western Atlantic coastline, nestled but not sheltered in that perfect triangle between the Atlantic Ocean, the Obidas lagoon and Montejunto mountain that creates its own very unique microclimate. Cool prevailing winds from the Atlantic, the shield of the eastern rocky outcrop and influences from the salty Obidas lagoon all play vital roles in the winery’s complex cast of climatic characters.

‘’Earth, music, passion – here we listen to the vineyard and let it dance at its own pace,’’ says Tomás Emidio.
Co-owner, winemaker and inspiration behind Quinta Varzea da Pedra today, he did not start out as fruit farmer. Though much of his up-bringing revolved around the family farm, harvests of rock pear and foot-treading table wine, Tomás once marched to a different drum, focusing instead on studies in graphic design, and involving himself
in event management, as well as the local music scene. 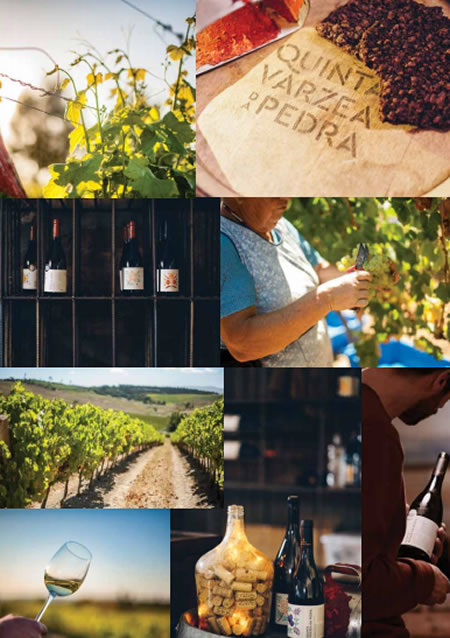 A close familial relationship bound him to the Quinta, his grandfather’s legacy, to which he returned in 2015. Although Tomás had worked for many years alongside his avô during harvest, it was the sad passing of his two grandparents within a three-year period that drew him back to the Quinta and his heritage.

Quinta Varzea in its current form, is much more than the sum of its experiences. Whole lifetimes have formed the relationship between the family and the land. An intrinsic appreciation for the terroir, the climatic influences, the living, breathing nature of the landscape, all help to shape the modern face of this young and energetic production. Extensive replanting of vineyards since 2010, modernisation of the winery and vinification techniques are all milestones on this progressive march into the future of Portuguese wine making.

Quinta Varzea Arinto/Fernáo Pires – Two single varietal productions but also an entry level ‘field blend’, these fabulously terroir-driven whites scream older vines and carefully integrated oak to my palate. Yet despite what my nose, palate and experience tell me, I am wrong.

After a deeply informative, very enjoyable social distancing conversation 326km apart, with Tomás the wine maker and Carlos, Jorge and Justo my long-suffering liaisons from Sovipral, I discovered things are not always what they seem.

All the experience in the world can’t help us from jumping to conclusions. In fact, although my senses cry out “you are mistaken”, the field blend, single varietal Fernáo Pires or Arinto don’t see the inside of a barrel at all. Deliberately oxidative oenology is responsible for what first appears to be sophisticated winemaking, with well-integrated oak, and mature vines. Along with many other misfiring wine enthusiasts, I got it wrong. No harm in that though, as long as the juice is good.

The sky is the limit but it’s the land and the imagination of what you can do with it that offers the only boundaries to what this production can achieve.

Quinta Varzea Branco Reserva  All the hallmarks, flavour sets, and complexity of quality Burgundy productions but at a fraction of the price. Nutty, leesy, weighty with fresh balancing acidity. The deliberate oxidation in a focused fashion adds years of bottle and barrel age. William Tell would struggle to put the arrow closer to the centre of the core.

The whites pair well with seafood dishes as well as poultry, pork and cured cheeses.

Quinta Varzea Tinto Reserva  The single red offering from the stable is a 50/50 blend of Syrah and Touriga Nacional. These relatively new vines grown on the Vinha de Adão Lobo site offer far more depth and complexity than vines this young have any right to do.

Mature before their time, wiser than their years, the new ethos and approach is firmly rooted in their ancestry.

Tinta Reserva, released is February this year, is the perfect companion to red meats, grills and stews.

As Tomás points out: “It was from our ancestors that we inherited the calluses and the pleasure that manual work has to offer to those who seek it, then you can learn to treat the land by its first name.”

How many of us have had such a personal introduction?

The quality and complexity of wines being produced at Quinta Varzea da Pedra, on vines no more than ten years of age, can only get better. If you want my genuine, heartfelt advice I’d say buy shares, take an interest, do whatever Tomás and his affiliates will let you do to cosy up to the brand, because in years to come these wines will not be readily available to the public, nor will their international demand have any chance of being met.