December in the garden

December is a low-key month when it comes to work in the garden, particularly if you have already completed all the autumn tasks.

Poinsettias
If you plan to use them in your Christmas decorations, buy them early this month as the best plants sell quickly.  Check to see that the leaves are firmly attached to the stalk and avoid any where several leaves may have fallen off.  Put the plant out of drafts in bright but not direct sunlight and don’t subject the plant to extreme changes in temperature.  Water when the surface of the soil feels dry to the touch. The best watering technique is to put them in the kitchen sink, water thoroughly and allow to drain.  Beginning in late December, feed occasionally with a weak solution.  The poinsettias should last at least until March.

Roses
Don’t fertilise or prune this month.  Allow any blooms to remain on the bush but don’t water them. If you need to move roses, winter is a good time to do it.  You can prepare the new beds now for the move in January.  Dig the ground deeply and add plenty of soil amendments.  Roses will thrive in clay soil, but need to have good drainage.   If you are going to plant a number of roses, use the time in December to plan a good colour scheme and keep clashing colours well separated.  For a big display, plant together at least three roses of one variety.

Bulbs
Now is the time to complete planting spring flowering bulbs, and there is still a little time to plant those which should have gone in earlier. Tulips, hyacinths and crocuses need cold soil, so start putting them in the ground between Christmas and New Year’s Day.  If there is a heat wave, wait until early January but aim to finish the job by the 10th.

If you are planting in pots, keep them in a cool spot and cover with a cardboard box to eliminate light, but water often.  When the foliage is four or six centimeters high, remove the cover and transfer the pot into the sun, but try to keep the roots from heating up by shading the pot with foliage or using an extra pot on the outside.  Water daily unless the rain does this for you.

Tulips will benefit from a light liquid fertiliser, first at planting then again when the leaves show.  Hyacinths in pots can be planted just below or at the soil surface.  Treat the pots as for tulips. Crocuses do well in low pots; keep the soil cool.

In early December dig up dahlia tubers when they are totally dormant.  Cut back the tops to 15 or 20 centimetres, then use a spade to slice through the soil and loosen it in a wide circle.  Take a fork to pry up the tubers.  Shake off the soil, cut the tops back to 4 centimetres, and place the unseparated clumps in the sun on newspaper until evening.  Continue drying for several days in a dry shady place.  Dust the clumps with bulb dust or sulfur, pack them without letting them touch in perlite, and store for winter in a cool dry area.

Amaryllis bulbs should be available now.  For one which is already planted but has not yet begun to grow, keep it cool and dark until growth begins, then put it in a sunny window and turn daily so the stalk doesn’t bend and keep watered.

When the bloom begins to show colour, shift it to a cooler location to make it last longer. When flowering fades, cut off the flowers but leave the stalk until you can see that the juice has retreated back into the bulb and then cut it off.  Put the plant outside in semishade for the summer.  Feed it occasionally.

Annuals
If you planted annual flowerbeds in September or October, they should by now be full of colour.  Once cold nights descend, they are unlikely to bloom until the weather warms up again if they have not begun flowering before Christmas.  Most plants can be fed regularly with a liquid fertiliser high in nitrogen and bloom ingredients. 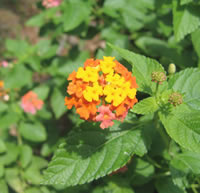 For the most part it is too late to plant annual flowers now, except in some sheltered coastal areas.  Seeds that can be planted now include African daisy, ageratum, calendula, California poppy, lavatera, Shasta daisy, mixed wildflowers – plant early in the month and in full sun.  Sprinkle the bed with water every morning until the seeds germinate, then water as necessary.

Pruning
Many plants can be pruned in December, but not tropical plans such as bougainvillea, hibiscus, lantana, or philodendron as pruning will stimulate growth which could be hit later by frost.

If you did not prune wisteria in summer, now is another opportunity.  Take close scrutiny of the buds – small, narrow ones are leaf buds while rounder, fatter ones often found on short, stubby growth called ‘spurs’ are for flowers.  Prune only those which will form leaves and any thin, young stems which might have grown this past summer by carefully separating them from older wood and cutting back to two or three buds.  Those young stems which you find growing in the direction you want can be tied loosely in place.

Lawns
Cool-season laws need feeding every six weeks or so.  If the grass turns red-brown with a kind of brown dust falling, it is rust and can be easily treated simply by fertilising the grass rather than treating with chemicals.  Mow every week and water when waits are insufficient.

Vegetables
If you planted winter crops they should be well developed by now, but planting can continue with artichokes, asparagus, beets, broccoli, Brussels sprouts, cabbage, cauliflower lettuce, potatoes.

Tie cauliflower leaves together over the head when it is still small to prevent the curds turning colour, but monitor for snails.  Remove the bottom sprouts and bottom leaves from Brussels sprouts.  Cut broccoli as soon as it makes a head, but leave the stalk as it will produce side sprouts.

Fertilise according to individual vegetable needs.  If you’ve planted from seed, begin feeding when the plants are four to six centimeters high and then every six weeks.  If you have bought young plants to transplant, begin feeding about six weeks after you have put them in the ground.