This first truly global conflict (1756-1763) involved most of the major European powers and many smaller European states, as well as nations in Asia and the Americas/Caribbean. Great Britain and its allies Portugal and Prussia fought against France, Spain and Austria, an escalation of the French & Indian War in North America between England and France. 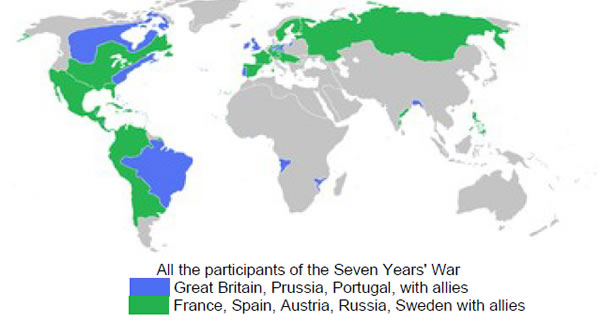 Canada, Havana, Manila, Senegal, Benghal, Rio Negro Valley in Amazon saw changes in ownership, and as the dust settled with the Treaty of Paris in 1763, Canada and America east of the MIssissippi were ceded to Britain, Spain ceded Manila and Florida to Britain in exchange for Cuba, the Mughals ceded Bengal to Britain, Portugal under the Marquis of Pombal expanded control of Brazil and its lucrative gold industry, and France and Spain were much weakened on the world stage.

World history was changed forever – new English king George III of Hanover was crowned in 1760, a year after a great defeat of the French army at Minden, by British and Hanoverian forces. George Washington led British forces against the French and Indians in North America – post war taxation and policy over the Amercian colonies would lead to the American Revolutionary War and Independence in 1776. With Canada firmly British, the American expansion of its west began.

Former Portuguese ambassador to Britain, the Marquis de Pombal, now Prime Minster, rejected French- Spanish demands to cease trade & co-operation with Britain in 1761, where they sought a revocation of the Treaty of Windsor 1386 (military alliance) and the Methuen Treaty 1703 (military & trade alliance). As a result of Portugal's refusal, France & Spain invaded, believing Portugal still weak from the 1755 earthquake. However, they were overwhelmingly defeated at the hands of Anglo-Portuguese forces and guerilla warfare, in 1762. Spain never recovered its European status or prestige.

The two major defeats of the French navy in 1759 allowed Britain to build a commanding global trade and terriitory expansion, in what became the British Empire of the 19th Century.

Portugal captured the Rio Grande valley from the Spanish, leading to the establishment of Manaus as the Amazonian capital. The then capital of Brazil, Salvador, was moved to Rio de Janeiro in 1763 as Portugal
expanded is presence in its colony, protecting its substantial gold production inland from Rio.

Read other parts of this series HERE.