Reasons Why You Should Consider Buying a Toaster Oven

There are so many kitchen gadgets and accessories that choosing just one is a tricky process. They also make great gifts. But which kitchen tools are really going to help out and see some use? One of the most useful and innovative devices out there is the toaster oven.

That’s because toaster ovens have several advantages over conventional ovens and having one opens up a lot of interesting and convenient capabilities. Check out this article to familiarize yourself with some of the major benefits that come from being a proud owner of a toaster oven.

Microwaves have a tendency to make food soggy and soft. And you definitely can’t bake with them. Of course, there are options like crisping sleeves to help add some crunch but they’ll never come close to what an oven can do.

An Energy-Efficient Option For Small Meals

Ovens consume a tremendous amount of energy. Along with some of your other major home appliances, ovens are one of the major consumers of electricity. They are notoriously expensive to run. And a lot of that money is wasted heating up small individual meals or snacks. Using a massive oven for such a small task is overkill and a complete waste. That’s where toaster ovens come in.

Toaster ovens are more energy-efficient for most of the typical kitchen’s daily heating needs depending on the size of the job. If you just need to heat up or bake something small, it’s a pain to pre-heat the oven and heat up the entire baking chamber for your single souffle.

The truth is that you don’t need to use that big ole oven every time you want to heat something up. With a toaster oven, you’ve got the option of enjoying the flavour and texture of conventionally baked goods with the low-energy consumption that comes with a smaller device.

Using a toaster oven to reheat your food is always a good idea compared to that of using a traditional oven or microwave. And using it to cook is a good option most of the time as well. But you’ll want to make sure you get the right kind and size depending on what you want to bake.

There are several different kinds of toaster ovens and getting familiar with their features is a good idea to ensure it has the capabilities that you’re looking for. Going to a review site is a good place to get started. You can find some unbiased reviews of the most popular toasters in 2021 at https://kitchenfold.com/toasters/best-toaster-ovens/. Reading those reviews will give you a good idea of what’s on the market and what they can and can’t do.

A Cooler Option For Summer Baking

Many households avoid baking entirely in the summer. That’s because using the oven adds a lot of ambient heat to the house. If you pay attention, you’ll notice the temperature rising shortly after turning the firebox on. Just look at your thermometer in the kitchen and adjacent rooms. Now that’s not so bad in the wintertime. But in the summer, it’s just too much.

Adding heat inside your house during the hot months of the year will destroy your energy budget and leave you sweltering despite running the AC on full blast. It’s hard enough for climate control equipment like insulation, fans, and air-conditioners to mediate the summer heat without intentionally adding tons of it inside.

Toaster ovens are much smaller than traditional ovens. And even better, they can be conveniently moved to the outside of your house. And why not? Placing your toaster oven on the deck, patio, or balcony is a great option to keep strong food smells and ambient heat from affecting the interior of your house. It’s better than baking cookies in your car.

Convenient Size For Any Home

Ovens are pretty massive devices if you think about it. Because of that, you may not have a large oven or any oven at all for that matter if you live in a small home. There are many other living situations that may not provide the opportunity and space to utilize an oven.

Student dorms and room shares are two situations that greatly benefit from toaster ovens. That’s because it allows the inhabitants to cook a large variety of foods in an environment that they can’t otherwise cook in. Studio apartments and rented rooms also may not have ovens. Buying a toaster oven for a student that lives in a dorm is a great gift idea and they’ll think of you every time they’re eating a hot ham and cheese sandwich while their classmates slurp instant noodles.

Despite space limitations, toaster ovens are small and portable enough that you can always find a place to set one up, even if it’s only temporary. That’s right. As soon as it’s cooled off after use, the oven can go back in its box and be put back in storage to free up prime kitchen real-estate.

As mentioned previously, a toaster oven can be taken to a commons area or outside place and used anywhere there is an outlet. This may benefit people that are not allowed to cook in their place of residence but still want to enjoy some cookies or baked potato.

However, there’s more to the mobility of the toaster oven than baking on the porch in summer or outside your dorm. Toaster ovens can go with you almost anywhere. Bringing a toaster oven to a campsite really has the potential to spice up the camping trip. Having one available opens you up to a whole world of cuisine that would otherwise be unavailable while outdoors. It also comes in handy if the fire dies down and you’re ready to eat some hot dogs.

A toaster oven is also a handy addition to any RV. Using one while on the open road can provide a sense of stability and home comfort that’s sorely missed while on the road for a long time.

Finally, your oven can be taken to a community center, chili bake-off, church, friend’s house, and anywhere else that you go if the situation demands.

Turn Your House Into A Bakery On The Holidays

The reality of an oven is that it’s way too big 99% of the time and then too small when you really need it. Everyone has been in the pickle where they want to bake multiple things simultaneously but can’t because of a few reasons.

Maybe the temperatures required are too different. Perhaps there is no shelf space left so the second item is put on a rack that’s too high or low, like with pizzas or cake layers. Sometimes the smells shouldn’t intermingle. Nobody wants a cake that smells faintly of baked fish. Or you might just need to bake one thing and broil the other.

Of course, oven space is in high demand around the holidays. Having a production bottleneck at the oven really drags out the cooking process and limits the home cook from being able to realise their food dream. 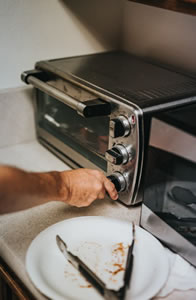 Cooking is all about timing and consistency. Having multiple baking options allows you to cook everything precisely the way that you like it without having to sacrifice that crispy crust or roasted chicken skin.

Employing a toaster oven during these high-demand baking times will allow you to produce the quality of food that you desire. Some things are even cooked better with a toaster oven than with a traditional oven.

An oven is a lot smaller and more energy-efficient. But it also saves a lot of time. Pre-heating the oven takes a lot of time. Sometimes it takes longer than the baking process itself if you’re just trying to reheat a single portion of food. Toaster ovens are a lot smaller. They’re able to heat up much faster because they use less energy and must heat a much smaller space.

This saves not only time but energy and cooling expenses as well.

A Lot Of Practical Uses To Revolutionize Your Kitchen

As demonstrated in the article, toaster ovens have a lot of benefits. The benefits of toaster oven ownership extend beyond just a novelty. It provides the opportunity to revolutionize baking in your life. It extends the flexibility of baking in the home and provides people in small housing to enjoy the pleasures of baked bread or a crispy muffin to remind them of home.

Because of its wide range of benefits, toaster ovens have a place in almost every home. They are already a popular home kitchen accessory and they are becoming even more widely owned. They’re also relatively inexpensive. Therefore, if you’ve got one already, think about the people in your life that could really benefit from such a contraption. They’ll sing your praises in baked goods for years to come.