A few days before Christmas, 26-years ago on December 21, 1992, Martinair flight MP495 crashed at Faro Airport.

On board were 13 crew members and 327 passengers, mainly holidaymakers from the Netherlands. Two cabin crew and 54 of the passengers were killed in the accident. Additionally, 106 people were badly injured.

Dutch airline, Martinair, had owned the DC-10 aircraft from new in 1975 but had leased it to three separate Asian airlines from 1979 to 1981.

On the morning of the accident, the plane had been delayed at Schiphol airport, Amsterdam, because of a faulty thrust-reverser. This was not fixed but the plane anyway took off for Faro at 7:30 am.

A thunderstorm was rumbling around the Faro area, with accompanying heavy rain, high winds and low cloud.

The Faro control tower informed the crew of the thunderstorm and that there was water on the runway. Following an unsuccessful attempt to land, the Captain took the DC-10 around for a second attempt.

The aircraft landed with a vertical speed well in excess of the manufacturer's design limits. Following this hard landing, the starboard main gear collapsed, the starboard wing fuel tank ruptured and the contents ignited. The DC-10 fuselage split in two, coming to rest with the front section lying on its side.

The commission of inquiry determined the cause of the accident to be "unexpected windshear in the final stage of approach in combination with a high rate of descent, causing a hard landing exceeding the aircraft's structural limits. Contributing factors were crew errors, specifically a premature large power reduction and apparently not noticing the disengagement of Control Wheel Steering mode."

The accident report narrative stated, “At 05:52 LT Flight 495 took off from Amsterdam for a flight to Faro. The flight had been delayed for 40 minutes due to no. 2 engine reverser problems. After a flight of 2 and 17 minutes, the flight was cleared to descend to FL70. Shortly afterwards Faro Approach Control provided the crew with the following weather: wind 15deg./18 kts; 2500 m visibility; thunderstorms with 3/8 clouds at 500 feet, 7/8 clouds at 2300 feet and 1/8 cumulonimbus at 2500 feet, temp. 16deg. C.

“At an altitude of 303 m and 140 knots speed the approach became unstable and at 177 m the first officer switched the autopilot from CMD (command mode) to CWS (control-wheel steering). One minute later it was switched from CWS to manual and the airspeed began falling below approach reference speed. About 3-4 seconds short of touchdown elevator was pulled to pitch up and engine power was increased. When the no. 3 and 5 spoilers extended, the aircraft had a 25deg. bank, left wing up. The right main gear contacted the runway with a 900 feet/min descent rate at 126 knots, +8.79deg. pitch up, +5.62deg roll and 1,9533G. The right wing separated while the aircraft slid down the runway. The aircraft came to rest 1100 m from the runway 11 threshold and 100 m to the right of the centreline and caught fire.”

The ‘probable causes’ listed in the accident report, were,

Contributing factors were: “The instability of the approach; the premature power reduction, and the sustaining of this condition, probably due to crew action; the incorrect wind information delivered by Approach Control; the absence of an approach light system; the incorrect evaluation by the crew of the runway conditions; CWS mode being switched off at approx. 80ft RA, causing the aircraft to be in manual control in a critical phase of the landing; the delayed action of the crew in increasing power; the degradation of the lift coefficient due to heavy showers.

"The Netherlands Aviation Safety Board commented that the probable cause should read: "a sudden and unexpected wind variation in direction and speed (windshear) in the final stage of the approach. Subsequently a high rate of descent and an extreme lateral displacement developed, causing a hard landing on the right-hand main gear, which in combination with a considerable crab angle exceeded the aircraft structural limitations."

At the time, a criminal case was brought before the Faro Court to determine possible liabilities in the accident. This eventually was closed after acknowledgment of the absence of fault of the flight commander of the Dutch carrier.

Later in 2008, a lawsuit was filed at the Lisbon Administrative Court by Martinair and its insurance companies against ANA but the judgment was suspended, at the request of the parties.

During the trial, a US expert in meteorological phenomena, John McCarthy, was called to testify as Martinair was claiming €125 million from airports management company, ANA, in compensation for the crash.

The airline’s lawyer, Manuel Magalhães e Silva, argued that ANA, “did not supply the crew with meteorological information,” and that a crash could have been avoided, “if ANA had given the crew the correct indications.”

The claim centred on the meteorological information given by ANA at the time was not for runway 11, which the aircraft was aiming to land on, but for runway 29, “which by far exceeded the operational capacity of the aircraft.”

McCarthy said that the air traffic controllers failed to inform the crew of the existence of microbursts, very strong descending winds, which later were identified from data recorded on the aircraft’s Black Box.

According to Manuel de Magalhães e Silva, judicial proceedings in Portugal ended when "the case was suspended and the terms of the transaction determined to be confidential", a "completely normal" procedure when very high amounts are involved.

In January 2016, the Portugal Resident ran an article, stating that, 'New details about the plane crash at Faro Airport that killed 56 people and injured 106 in 1992 have emerged with the aircraft’s supervising technician claiming the Dutch Martinair Boeing 707 (sic)* “never should have left Amsterdam Airport”.'  HERE

The revelation had been contained in a report by Dutch news channel EenVandaag, which added strength to the concern that the crash was the result of a series of pilot and crew errors.

The technician claims he was “pressured” into signing a form that postponed the replacement of important landing gear for the third time when it should have been delayed no more than twice.

Says the technician, Martinair thought more about “profits than safety” and that the approach was “at a wrong angle” and that landing should have been cancelled. EenVandaag’s report reiterated that parts of the investigation have been, “classified until 2073.”

British expatriates, John and Sheila Watts, moved to the Algarve in 1987 and were on the Martinair DC-10 when it crashed. They had been to Amsterdam on business and were sitting near the rear of the cabin as flight MP495 headed to Faro.

Despite the violence of the crash, both were unharmed and, as they had arranged to be picked up at the airport by a colleague, saw no reason to cancel this arrangement and were soon back at work at Five Star Services in Vilamoura.

John Watts later phoned his mother and described the crash, "There was a terrific storm raging there and the plane was going around for the second time to try to land when it must have nose-dived."

In December 2018, Sheila Watts commented to algarvedailynews, "There has been no official recognition or memorial to those who lost their lives, but I occasionally think of December 21st as 'Survival Day.'

"We were both profoundly grateful then to be able to get on with all our activities immediately, and since John's death in 2015 I count myself fortunate that I am still doing just that.

“Moving on from 'Five Star Services' we were involved with running the Parque da Floresta bowls club for five years until our retirement in 2001. John subsequently died in 2015 at the age of 76.”

As for the miraculous escape, a friend commented, “John told me, "smoking saved my life that day," explaining that they survived the crash because they were seated in the smoking section at the rear of the cabin. 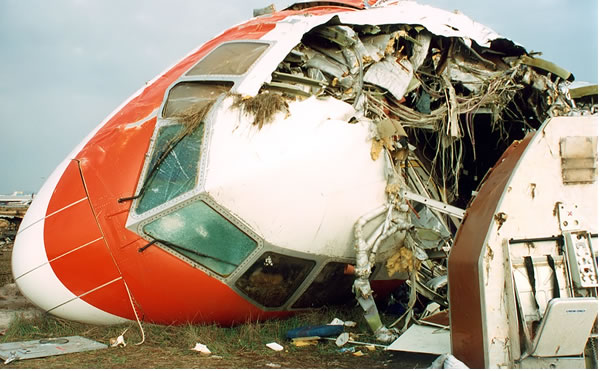 Survivors and next of kin of the deceased passengers of the catastrophic accident with a Martinair DC-10, flight MP495, at the airport Faro in Portugal on December 21, 1992, asked AvioConsult to analyze the accident, the Portuguese Report of Accident (RoA) and the contribution of the Dutch Safety Board (DSB) to the Investigation Commission.

Although the last 80 seconds were also included, this period was not yet described in great detail, which is the purpose of this document, that is to be considered a supplement to ref. A. Included are data graphs out of the Digital Flight Data Recorder (DFDR) and Airborne Integrated Data System (AIDS) to which will be referred to from the text; no other documents will be needed during reviewing this analysis. The documents referenced A – E on page 35 were used during the analysis.

Main Conclusions
Accurate analysis of the DFDR data revealed that the flight crew did conduct the approach to Faro airport neither in accordance with the published procedures by the Portuguese authorities, nor with the Basic Instructions Martinair (BIM) and the DC-10 Aircraft Operations Manual (AOM). Both the Air Traffic Control (ATC) ground radar data in Annex 12 of the Report of Accident, as well as the wind and heading analysis presented in this report prove that the final turn radius was too large, because the very strong and well-known crosswind was not taken into account by the pilot-flying (the copilot), that the aircraft did not return to the prescribed 111° VOR approach radial and that the aircraft cannot have flown on this approach radial, but approached the airport on a ground track of 117° (§ 2.1.1 en § 5.6.5).

ATC had informed MP495 during the final turn that the runway was flooded, resulting in a 5 kt crosswind limit. DFDR heading and airspeed data prove that the crosswind during the last 80 seconds of flight was near constant (20 kt) and exceeded the limits for landing at both a wet (15 kt) and a flooded runway (5 kt). Despite the large limits- exceeding crosswind, the crew continued the approach.

Altitude, airspeed and control input data recorded by the DFDR and AIDS prove that there were no large abnormal vertical deviations in the descent altitude profile. The deviations from a straight descent below 2000 ft were the result of the transition from the Vertical Speed mode of the autopilot to manual control with support of the Control Wheel Steering (CWS) mode of the autopilot below 600 ft. The rate of descent that was set in the autopilot might have been a little too high, or the headwind component larger than anticipated, because a 10-second level flight was required to intercept the visual PAPI glide path at 500 ft.

This is not exceptional during a non-precision approach. Airport Faro was not equipped with an instrument landing system. It does not prove the occurrence of up- or downdrafts either.

This accident is a classic example of the fatal consequences of not applying the written and well-established procedures and protocols for a non-precision approach. The Approach and Landing Accident Reduction (ALAR) working Group of the Flight Safety Foundation already advises for many years to indeed apply the procedures during approaches, and more specifically to maintain the required approach radial and descent path, and a stabilized engine RPM to reduce the workload ('stabilized approach'). Below, all conclusions of this report are copied and grouped with references to the individual paragraphs within the analysis.

The full report can be downloaded at: https://www.avioconsult.com/accidents.htm#DC-10