UK drivers can look forward to hassle-free toll payment in Portugal without a Euro bank account, thanks to the expansion of an automatic toll payment system.

Sanef Tolling already provides 155,000 UK customers with a tag, the Liber-t tag, used on French motorways to pass through toll booths without stopping. These are now being extended through the VIA-t tag, to UK travellers in Spain and Portugal, where most motorways are tolled.

The expansion to the business comes after official figures revealed Portugal continues to be the cheapest holiday destination for UK travellers. Charles Hewson, Director of New Business at Sanef Tolling, (pictured above), explained: “For the past six years, thousands of UK motorists driving in France have benefitted from our service that removes the hassle of stopping to pay tolls with cash, enabling them to drive straight through.

“We’re excited to now offer the same time-saving and hassle-free service to UK-based customers driving on the thousands of miles of motorway in Portugal, which hasn’t been possible up to now without a European address and bank account.”

Now for the first time, Brits can register and pay in sterling for hassle-free travel on motorways in France, Spain and Portugal, rather than rummaging for small change or facing toll booth queues, saving both time and stress.

David Baston is retired and frequently travels to France, Spain, Portugal and Italy, where he enjoys taking his 1966 Lotus Elan out on the open road, (pictured below). He’s been making these journeys for around 25 years, and said the Liber-t tag has made things much easier. He came across the tags after spotting an advert on the motorway in France.

'Portugal is (still) the cheapest place for a summer holiday' Telegraph, Jan 2017

He said: “It’s fab, absolutely brilliant. It’s a very neat system in that you don’t have to carry cash, and it just works so very well. When your car is so low to the ground and so old, sometimes the credit card slot for the tolls is on the passenger side of the car, so it’s a piece of cake; what’s not to like?” 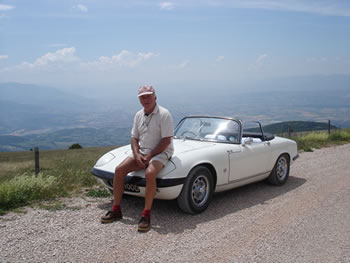 The Sanef Tolling VIA-T tag, costs just €10 with a further €20 refundable deposit and then an annual charge of between €6 and €16, depending on how often you use it. The toll charges are additional. A typical hire company in the Algarve charges between €1.85 and €2.50 a day for an equivalent tag, plus the cost of the toll fees on top.

As vehicles pass tolls, the uniquely referenced electronic tag, or transponder, which is placed on the windscreen close to the rear-view mirror, is automatically read, and the toll fee taken from the customer’s British bank account by Direct Debit up to 60 days later.

Phil Culling, 63, came across Sanef Tolling’s tags via an offer from EuroTunnel four years ago, and it couldn’t have come at a better time, as he was due to retire.

The former business owner from Doncaster explained: “We have a property in Zaragoza, Spain, so we’ve been driving through France and into Spain for a number of years. We used to have dogs, so it was more practical to drive there, and that meant we could also take bulk items like furniture across.”

Mr Culling, who has two grown-up daughters with wife Terril, now spends each summer at his villa, as well as taking at least one other trip later in the year, and the journey involves navigating through at least 11 toll booths.

He said: “All in all we probably live in Spain for around four or five months of the year, and tolls are becoming increasingly common in getting there.

“We love the tags, as it does make a big difference at tolls to be able to use the left-hand lane and just nip straight through. It’s amazing. It just takes the frustration out of it as we don’t have to queue up for ages now.”

The new initiative will benefit Brits driving their own cars in Spain, as well as people who hire cars and use the tolled routes. At the moment hire car drivers face a choice between longer journeys because they choose to avoid toll routes, paying a premium to car hire firms for a car with a tag inside it, or facing a greater risk of a fine because they need to remember to pay on time via the official Spanish or Portuguese tolling websites.

By investing in a Sanef Tolling VIA-T tag, motorists will be able to use the automated lanes and drive straight through toll barriers without any delays, or the need for local currency. Not only that, but drivers driving in Portugal can also get a Galp fuel discount card with their purchase of their VIA-T tag, saving up to €0.07 a litre on fuel2.

Mr Hewson added: “Many travellers may feel their best option is to hire a car with a tag already fitted, but that can often cost around €35 extra for a typical two-week holiday, while the actual toll cost might be just €3 to €5. So, buying your own tag can quickly produce cost savings, as well as making the journey a lot easier.

“Buying a Sanef Tolling tag in advance of your trip means you can simply fit it to the hire car as you would your own vehicle, and enjoy a swift, stress free journey with fees automatically settled via Direct Debit.”

The company confirmed that its new VIA-t product works on all Spanish toll roads and with the Portuguese Via Verde toll system and the A22 Via do Infante system in the Algarve.

Sanef have recently contacted people who have bought this tag indicating there may well be a problem with the readers in Portugal.

I have a sanef tag and used a hire car. Following the advice to disconnect the company's tag, which I did. Signed a waiver with the hire firm. The sanef tag bleeps at the Toll Booths, but does not appear on my sanef account. Sanef tell me that their website advises against using their tags in a hire car. Had to disagree, as I read their advice straight back to them telling people how to use the tags in a hire car! I'd advise people not to use the tags, at least until the teething problems are resolved. A22 toll road. The Via Livre site does not let Portuguese cars pay for tolls on their site..I'm back in two months in my own car, and hope the probs are sorted.
0 #2 MDun 2018-02-09 16:30
Sanef have recently contacted people who have bought this tag indicating there may well be a problem with the readers in Portugal.
0 #1 Verjinie 2017-11-26 08:51
Doesn't this constitute non-E'U'-friendly, err, DISCRIMINATION?
Just asking..