The Rubis Gás Up festival heads to the Algarve between October 24 and 28, giving people the chance to see twenty hot air balloons in the sky over the region as well as experience a balloon flight.

The event is being organised by Windpassenger with the main sponsorship of Rubis Gás and the support of Lagos, Portimão, Faro and Albufeira Councils, the Parish Council of Alvor and Lagos and Portimão aerodromes.

Guido Van Der Velden dos Santos from Windpassenger says there will be 20 hot air balloons, five of them are in intriguing and amusing shapes, like the 44 metre long Dutch racing bike, the Brazilian diver and the German ice cream.

Other balloons to look out are branded by Radio Renascença, Porto, Silves 'Capital of the Orange,' Paladin, REMAX, Liquor Beirão and balloons from Rubis Gás.

During five days, the event will be be based at Portimo, Albufeira, Faro, Lagos and Alvor on different days. The departure sites of the flights will be announced the day before on event’s Facebook page and will be determined by the weather. 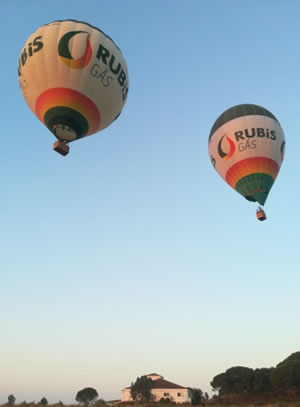 But fear not as during the last three days of event, 26th in Faro, 27th in Lagos and 28th in Alvor, visitors will also be able to experience the sensation of a climb and descent in one of the three ground based static balloons.

The festival will have two Night Glow evening events, 'a beautiful show of light and sound involving balloons and music.'

Night Glow takes place on the 26th at the Athletics Track in Faro and on the 27th in the city of Lagos near Meia Praia restaurant.

Generally, tickets for balloon flights with Windpassenger can be purchased online at windpassenger.pt or at FNAC with flights between February and early December.

In terms of safety, Windpassenger is the leading company in Portugal with 30 years of experience in flying balloons all over Portugal and other countries.

The brand is now managed by Passenger of the Wind, a company dedicated to all areas of ballooning, from passenger flights to advertising flights, balloon sales and the training of new pilots.

Since 2004 its qualified pilots have flown more than 28,000 people and the company has all the certificates, insurance and licenses required by the European Aviation Safety Agency and is inspected annually by the Continuing Airworthiness Management Organisation, ensuring maximum safety.