Portuguese youngster wants to be the first to ride around the world on a minibike!

The youngster Portuguese who set a world record by overland South America on a 125cc motorcycle announced that in 2020 he will try to set another one by riding on a mini moto around the world. Born in Oliveira de Azeméis, Portugal, André Sousa proposes to travel more than 50 countries throughout the six continents on a Honda Monkey mini bike - the contemporary version of a classic 1970s model, now with a refurbished design but still with its “vintage” look, involving a 9-horsepower, 125cc engine.

“There is no official record that anyone has ever donethis before and my goal is to achieve the longest travel record ever by using a minibike, on a continuous route and never returning to Portugal until the entire trip is completed,” André Sousa says.

Recently graduated in Business Management, he reveals that his motivation is the desire to “know new cultures” and is also enthusiastic about the “stimulating self-overcoming”. Moreover, hedoes not set specific deadlines for the adventure to end because he anticipates that it will be “more difficult and tiring” than the one that made him earn the 2018 record in South America. The only thing that he can say is that the trip “will always take more than two years”.  André expects that the mainly difficulties are going to be due to the size of the bike: “On one hand, as it is smaller, I will need to stop more often to stretch my back and on the other hand, there is only room for the driver and a very small gas tank, which means that I will only be able to take with me what is really necessary and still make room to carry an extra gasoline tank.” The Monkey that Honda gave to the former federated athlete and which will have official 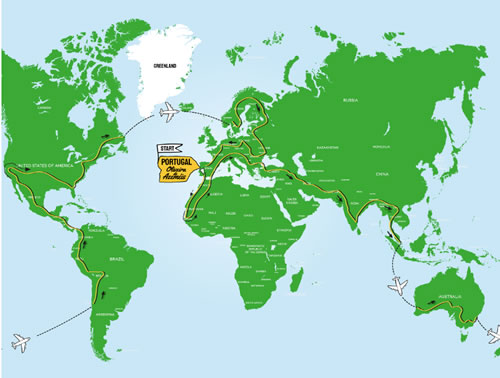 assistance guaranteed throughout all the trip, will therefore be adapted to meet the minimum requirements of this project, like the possibility to carry camping accessories to avoid extra costs of lodging, as this adventure is limited to a budget of 60,000 euros.  “As I am still raising sponsorships, the 60,000 euros is the minimum cost of the trip, as long as there are people who offer me accommodation and food wherever I go.

Honda will still have to adapt the bike so that I can ride it with at least one backpack with clothes and tools, and a tent and a sleeping bag for whenever I may need it”, says André.

Born in December 1995, André Sousa started riding motorcycles at the age of eight andat 14 was already competing professionally. In 2013, he reached 4th place in the 125cc National Speed ​​Championship and in 2014 was runner-up in the 600cc Championship, when a wrist injury came by and restricted his performance. In 2016, while attending an Erasmus exchange program in Slovakia, he first visited nine countries in the Balkans within a month, without any record motivation, but already using a free hosting project, provided by the international community of the Couchsurfing network, whose members exchange stay and even food.

In 2018, during an internship in Brazil in Business Management while still studying in Coimbra Business School, André Sousa then launched himself in the challenge of formalizing the record as the first traveler to ride on a city bike throughout the 11 countries of South America linked by land. He achieved his goal by covering over, between May and September (120 days), 24,225 kilometers of land and even extensive desert areas, on a Honda 125 cc that barely exceeded the speed of 60 kilometers per hour, given the weight of luggage and extra fuel.  The current challenge “Ridethat Monkey” has already the formal support of the Portuguese Motorcycle Federation (FMP), whose President, Manuel Marinheiro, states that this is “a pioneering project of overcoming and courage on a motorcycle”. In the FMP’s President opinion, André Sousa will take “Portugal and motorcycling to make history throughout this world” and will demonstrate that “it is not necessary to have a big and high displacement motorcycle to travel around the world”.